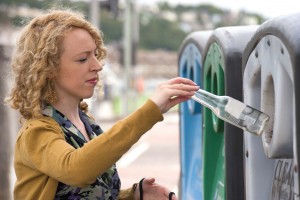 Two of the leading organizations in solid waste and recycling joined forces last year to compile comprehensive guidelines that they believe are mutually beneficial for municipalities, waste management companies and material recovery facilities.

The result of the collaboration between the Solid Waste Association of North America
and the National Waste and Recycling Association was a document titled “Joint Advisory on Designing Contracts for Processing of Municipal Recyclables.” Their guidelines are the culmination of a nearly yearlong process, during which experts from private industry and local government agencies met to address the need for consistent standards in contracting while also addressing the challenges faced by private industry and local public agencies that seek to improve and enhance residential recycling programs.

In a press release issued in April, the organizations stated that the “joint advisory aims for enhanced effectiveness of municipal recycling, which reflect the economic realities of the market place.”

Chris Doherty, director of communication and public affairs for NWRA, and Ann Germain, director of waste and recycling technology, spoke about the need for this advisory.

Germain explained that over the last several years the recycling industry has gone over a few speed bumps. That created a lot of hand-wringing in the industry.

She said things were going really well for a while, but the economic downturn brought challenges with materials — both with the amount of material being generated and changes in packaging.

“People’s habits have changed. Newspapers and other paper materials have declined dramatically and manufacturers have aggressively light-weighted packaging. So, for example, a 20-ounce can weighs much less today, but the cost to collect 1,000 cans and process them remains the same or higher.”

The other thing driving change, according to both, is that the revenue stream has changed. China is the biggest exporter of U.S. recycled materials, and it has become stricter about the quality of the materials. This has slowed revenue streams for NRWA members and decreased revenues.

These situations and others make having a long-term contract with municipalities less viable.

“So this (guideline) is our attempt to make sure we’re conveying what we think is important so that everybody understands and that it’s equitable for all sides,” Germain said.

The guidelines advise having contracts structured so they are based on market prices. When prices for raw recyclable materials are down, prices for service may be up; but when prices go back up, municipalities should benefit from that increase in revenue with decreased costs, whether they’re locked into a long-term contract or not.

One thing members of both organizations agreed on is that the quality of materials collected is the responsibility of all parties.

Germain said the move to closed bins was good, because it keeps materials dry: but a lot of people also throw trash in the bins, which makes its way to the material recovery facilities. There, process handlers have to pay to dispose of the waste.

The move to single stream recycling has also caused more contamination of materials.

“It’s definitely had its impact,” she said, acknowledging that making it easier may have resulted in more people recycling; but more education of the general public is needed.

“There are things that come through that people are genuinely confused about, and others they can’t possibly be: dirty diapers, for example,” Germain said.

One issue a lot of NWRA members complain about is hypodermic needles. Germain said sometimes a person tries to be responsible and tosses the needles in an empty plastic laundry container, but then puts the container in recycling because it is recyclable.

“It is, but the needles have now contaminated it,” she said. “The process is pretty automated, but the materials are sorted out at the beginning by a person and we don’t want our workers subject to materials that can be a safety issue for them.”

Chris Doherty said plastic grocery bags mess up material recovering facility machinery, so it’s important to get the message out that they are recyclable through grocery stores. He also shared that the NWRA has a website called Begin with the Bin, www.beginwithbin.org, that addresses what should and shouldn’t be recycled.

The percentage of contaminants in recyclables has doubled in 10 years, from 10 percent to 20 percent. If it still costs $60 to process, but there are twice as many contaminants.  That’s a big reduction in revenue.

“We do have great processing capabilities, but they’re not designed to receive stuff they can’t handle,” he said.

The joint advisory came about because of the issues NWRA members were having in getting the message across to mayors and town managers. Germain said a major member brought the issue to them, saying that when trying to discuss increased costs in the contract with municipalities he would hear, “I’m just a small town mayor and you’re a big major company,” and he just wasn’t believed.

The NWRA decided to find out if this experience was isolated to one member company or if it was or more widespread.

“We talked to all of our member companies, and they said it was an ongoing, national problem,” she said.

NWRA felt it was wiser for municipalities to have an equal say, so they sent an initial draft to SWANA, which tends to represent municipalities.

“We received substantial comments coming back so we put together a group of people who represented waste management companies and also representative’s municipalities,” she said. “We feel we came up with something that’s genuinely fair for all parties involved.”

One suggestion in the guidelines mentions taking periodic samples of the recyclables collected and using that sample to determine the cost of the contract over the next year based on the type, quality and quantity of materials. 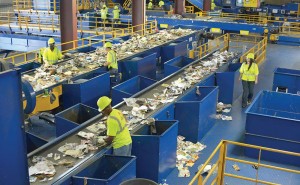 Workers in a material recovery facility keep their eyes on the recycled material going through the automation process to make sure no contaminated material gets through. (Photo courtesy National Waste and Recycling Association)

Sara Bixby, S.C., deputy executive director of SWANA, spoke about its role in this endeavor and why members felt the joint advisory was needed.

“Solid waste management and recycling management, in our opinion, is the responsibility of local government to ensure that it’s happening and happening correctly,” Bixby said. “Everybody has a role to play.”

It stands to reason then, that if local government is going to be responsible, it should be involved and have a voice in the process. “Otherwise it could be unbalanced,” Bixby said.

SWANA’s municipal members want to make sure the material is being collected and processed, so local government should want to be a business partner with collection companies and not leave it to the whim of the marketplace, she added. Local government is the stabilizer in the process.

“Cities and counties don’t have the ability to turn services on and off. We don’t get to say, ‘We’ll pick it up this week but not next because it’s not profitable.’”

Bixby and SWANA agreed that more education on what type of materials can be recycled and the process is critical.

“Part of the advisory touched on the fact that education has to be part of anything and should be addressed in the contract.”

She believes that responsibility is everyone’s, from companies that do the collection to municipal leaders to the individual who recycles.

“We can’t assume people know what they should do. We have to keep providing quality education,” she said. “And that’s the piece we tend to forget.”

The regular recycling resident has no idea what happens to their recycled material once it gets picked up. “And we haven’t done a good enough job of telling them. Our recyclables are part of an international marketplace and subject to that market’s fluctuations.”

Bixby said SWANA members are becoming more aware that there are a lot of costs to picking up and processing recyclables.

“We have to find a way to make it work and to make it fair. There are very few places where trash collection and recycling collection are truly provided for free. When a homeowner is sent a bill, they realize they have to pay for this service.”

The biggest goal with the joint advisory, she said, was to make sure that recycling continues to be available and viable for those who do the processing. The best way to do that is to be smart, educated partners in contracts for collections.

She acknowledged that not every city and county has private companies to do their collection. Some have their own, but they still need to be educated in order to do a good job.

“We believe recycling is an essential service, and we want to make sure it’s provided and it’s stable.”

The following excerpt was taken directly from the “Joint Advisory on Designing Contracts for Processing of Municipal Recyclables”:

“The purpose of the advisory is to provide both the public and private sector professionals in solid waste management with guidance, protocols and standards regarding contracting for processing of municipal recyclables. As such, the information in this Advisory is primarily focused on situations where recyclables are collected from the residential sector and delivered to a Material Recovery Facility for processing and preparation for sale.

“Prior to releasing a request for proposal or bid documents, the local agency could solicit input through public workshops from the recycling community, local haulers, elected officials and the general public. These workshops could help in defining the scope of work for the services requested and minimize confusion through the proposal/bid process. A pre-bid meeting with potential contractors could also be advertised and follow as part of the procurement process. Any questions, comments or concerns that are raised during this pre-bid meeting can be dealt with through an addendum to the contract.”

To sum it all up, Bixby said, “It’s telling when both the public sector— SWANA — and the private sector — NWRA — come together and say, ‘Here’s something we both agree on. It’s an important issue and we’re willing to work together to provide this.’’’

Contents of bid documents It is recommended that local agencies work with their legal counsel when preparing bid documents. Bid documents should include standard contractual provisions and consider the following for recycling contracts: Fully disclose business risk allocation (e.g., who assumes the risk; or the percent of risk); who owns the recyclable materials; and those situations that may protect the contractor or procurement agency from breach of contract. Some of these may include:

Very specific definitions need to be included in the bid documents to provide a level playing field for all bidders. Some provisions may be negotiated during the contract negotiations period.