Converting wasted food to energy can be an effective approach to keeping user rates low and forging or continuing on a path to sustainability. 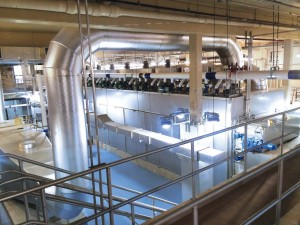 A biosolids dryer is used to evaporate water from wastewater solids. The dried product can then be sold and used as fertilizer. (Photo provided) 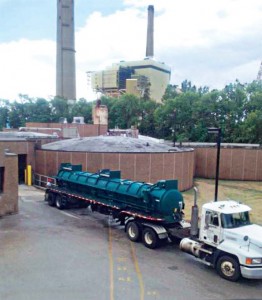 The high-strength waste dock at the Sheboygan Regional Wastewater Treatment dock began to receive large amounts of HSW in 2005, with a significant increase in biogas observed over the following years.The plant is almost energy neutral, producing approximately 80–90 percent of its electrical and heating needs. (Photo provided)

Sharon Thieszen, superintendent of the Sheboygan, Wis., Regional Wastewater Treatment Facility, believes in the merits of co-digestion, which in her words is “a process whereby energy-rich organic waste materials are added to wastewater or dairy anaerobic digesters with excess capacity. In addition to diverting food waste and fats, oils and grease from landfills and the public sewer lines, these high-energy materials have at least three times the methane production potential of biosolids and manure.”

But why target food waste specifically? Put simply, the problem is too large to be ignored. According to the EPA, “food waste is the second largest category of municipal solid waste sent to landfills in the United States, accounting for approximately 18 percent of the waste stream. That is over 30 million tons of food waste that the U.S. sends to the landfills each year. Of the less than 3 percent of waste currently being diverted from landfills, most of it is being composted to produce a fertilizer.”

Food that is disposed of in landfills decomposes to create methane, a potent greenhouse gas that contributes to climate change. The gas is shown to have a warming potential of 21 times that of carbon dioxide: reducing it can mean a healthier planet, and the process starts with converting food waste into energy. In a study done by East Bay Municipal Utility District, it was revealed that food waste has up to three times as much energy potential as biosolids.

This transformation could be a gamechanger. According to the EPA, if 50 percent of the food waste generated each year in the U.S. was anaerobically digested, enough electricity would be generated to power over 2.5 million homes for a year.

The facility first began to add large amounts of HSW in 2005, with a significant increase in biogas observed over the following years. The plant is almost an energy neutral facility, producing approximately 80–90 percent of its electrical and heating needs with savings of $270,000 annually in 2013.

Thieszen cited a fact that illustrates the capabilities of this process. In California alone there are almost 140 wastewater treatment facilities that utilize anaerobic digesters, she said, with an estimated excess capacity of 15–30 percent. Such a facility would be considered energy positive. Other benefits include greenhouse gas emission reductions, economic returns and diversion opportunities. 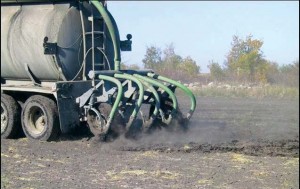 Food waste being applied as fertilizer after first being converted to a biosolid at a waste treatment plant capable of co-digestion. (Photo provided)

According to Thieszen, the California facilities are outliers, but that doesn’t mean it’s not feasible for other plants to become energy positive.

“Water Resource Recovery Facilities utilize 30.2 billion kWh per year, or 0.8 percent of the national electricity use,” she said. “As a result, WWRFs are always looking to be more energy efficient and maximize their resources.” She noted a few WRRFs have achieved energy neutrality or energy positive through a combination of energy efficiency measures and the addition of organic wastes.

The Sheboygan Regional Wastewater Treatment Plant was one of the “pioneers of high-strength waste addition for biogas production,” Thieszen noted. Th e facility first began to add large amounts of HSW in 2005, with a significant increase in biogas observed over the following years. The plant is almost an energy neutral facility by producing approximately 80–90 percent of its electrical and heating needs, with savings of $270,000 annually in 2013.

Thieszen is quick to point out this achievement did not happen overnight, nor was it painless or inexpensive. But the results speak for themselves.

“Sheboygan Regional Wastewater Treatment Plant has been able to achieve near energy neutrality due to a very skilled and dedicated staff. Energy is considered in every project and preventative maintenance is performed on off-peak demand time periods.”

But before there was preventative maintenance there had to be the infrastructure in place. According to Thieszen, the Sheboygan Regional Wastewater Treatment Plant started its co-digestion program by using existing excess tanks to receive and store the high-strength waste. Grant funding provided a significant portion of the capital funding for the combined heat and power equipment, she noted. Total costs for the capital investment was $2.77 million, with $1.1 million coming from a grant, which meant the city was responsible for $1.6 million.

Although the initial costs may be significant, the digestion of food waste can be quite lucrative and the payback period can be less than three years depending on the existing infrastructure at the wastewater plant, according to the EPA. Th e potential ROI may be an incentive for treatment facilities to invest in this technology, but that doesn’t necessarily mean that the up-front money is available.

Federal and state sources can provide financial assistance. Th e federal government provides grants, loans and rebates to municipalities. Such funding may be available to help fund the capital investments; however, Thieszen said “often the money saved by reducing the energy purchased justifies the capital investments provided there is excess infrastructure already in place.” 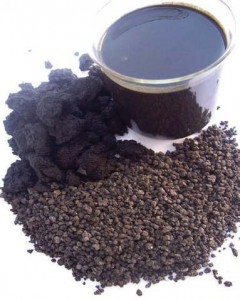 Treated biosolids can take the form of liquid, a cake or dried biosolid; each has three times the potential energy of the food waste in its original form. (Photo provided)

Additional revenue may be earned through tipping fees for the high-strength organic waste. The Sheboygan Regional Wastewater Treatment Plant was able to use its excess digester capacity and grant funding to start the co-digestion and combined heat and power program. The energy produced from the program provides enough financial savings to justify additional capital expenditure to rehabilitate the existing infrastructure and continue the program.

Savings may be part of the equation, but Thieszen cautions decision-makers they should take a big-picture approach to budgeting.

“While Sheboygan’s HSW receiving program has generated a significant amount of revenue from tipping fees while off setting more than 80–90 percent of the energy costs for the facility over the past 10 years, there are capital and operating costs associated with maintaining the receiving station and utilization equipment.” For example, she said the re-purposed tanks used for storage show significant signs of corrosion and require rehabilitation in the immediate future. The microturbines will require rehabilitation in the next 5 to 10 years, and a need for HSW diversification is arising due to the demand for the materials.