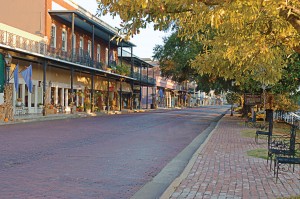 Oprah Winfrey put her seal of approval on Natchitoches Parish, La., once, tagging it “the best little town in the USA.”

Indeed, the area, established in 1714 and named for a Native American tribe, is a tourist attraction and much more. Historically, it’s the oldest permanent settlement in the Louisiana Purchase. In 2005 the National Trust for Historic Preservation honored Natchitoches as one of the 2005 “Dozen Distinctive Destinations” for Historic Preservation and presented it with a Great American Main Street Award.

With a population of 39,436 and 1,299 square miles, Natchitoches — pronounced NACK-a-tish — is a bustling melting pot of several influences. It’s the proud home of Northwestern State University and Louisiana Tech College, Natchitoches Campus, and also boasts of being the locale of the 1989 Dolly Parton box office hit movie “Steel Magnolias.”

According to Randy LaCaze, economic and community development director, the beauty of the town is kept up in large part by inmate crews from the Natchitoches Detention Center.

“Our sheriff has inmate crews that work directly under him picking up trash on the highways, but our detention workers come from the detention center and work under my department,” said LaCaze. “They assist with just about everything in maintaining our municipal buildings and also help with the landscaping and beautification efforts downtown, including setting up and tearing down equipment for our festivals that run throughout the year.”

The world-famous Natchitoches Christmas Festival is the area’s biggest festival.

“Yahoo Travel just issued a report that listed Natchitoches as one of the places to go to see Christmas lights,” LaCaze said. “Rockefeller was first on the list, Disney World was second and we were the third of the top seven places to see the lights of the season.”

Farrah Reyna, communications director of the Natchitoches Area Convention and Visitors Bureau, noted that the town is recognized as the bed and breakfast capital of Louisiana and is also home to the Cane River Creole National Historical Park at Oakland and Magnolia Plantations.
“We came into the United States in 1812, and to this day, the Native American, French, Creole, African-American and Anglo cultures blend their cultures, traditions and talents. Yet each remains distinct,” said Reyna.

“This was a $23 million facility and a cooperative endeavor with the city of Natchitoches, the state of Louisiana and the Hall of Fame Foundation. We beat New Orleans and Baton Rouge for this museum, which we consider a huge accomplishment,” said Reyna. The 27,500 square foot museum complex that was 10-plus years in the planning and funding. “Just last week a Toronto publication named our museum as having one of the best architectural structures in the world.”

Tony Davis, president and chief executive officer of the Natchitoches Area Chamber of Commerce, is pleased that in spite of past economic issues his culturally diverse city has persevered.

“Through conservative lending from local financial institutions, prudent financial planning from elected officials and a strong manufacturing, healthcare and educational economic ‘backbone,’ Natchitoches has done well handling the weak national economy and is moving forward optimistically for the future,” said Davis. “Collaborations between parish government, the city of Natchitoches, Natchitoches Parish Port and the Natchitoches Area Chamber of Commerce are producing greater efficiencies that are attracting businesses to our area to take advantage of the low cost of living, tremendous state incentives and local amenities such as Northwestern State University, the shallow-water port, interstate access, multiple rail lines and a vibrant Main Street and National Landmark Historic District.” 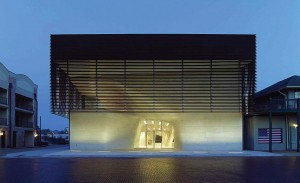 The exterior of the Louisiana Sports Hall of Fame and Northwest Louisiana History Museum in Natchitoches, La., features distinctive pleated copper panels which regulate light, views and aeration. It’s the only U.S. project on the prestigious Azure list of the top 10 projects in the world and beat out structures in London, Paris and Jordan for the honor. (Photo provided)

Another feather in the town’s cap is its airport, said Reyna. The Natchitoches Regional Airport was named Louisiana Airport of the Year by the Federal Aviation Administration in 2010. It offers two runways and has capacity for corporate jets.

The parish is also currently working with Cool Planet Energy Systems, which makes a carbon co-product called biochar and gasoline. The company will locate a $56 million modular bio-refinery operation at the Natchitoches Parish Port and will bring approximately 25 new jobs to the area.