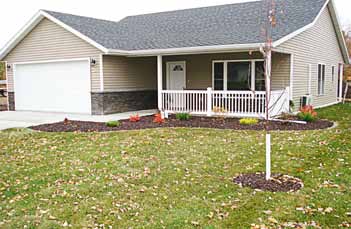 Using alternative energy and other energyefficient options, Parkside Development in Charles City, Iowa, will be net zero energy depending on homeowner’s energy usage. Pictured is a home prior to the placement of PV panels. (Photo provided)

A new development has garnered attention across the state of Iowa: Charles City, Iowa, is constructing a net zero energy subdivision. With its use of green technologies, according to Charles City Administrator Tom Brownlow, Parkside Development will produce as much energy as it consumes.

“It’s all the best practices all on one site,” he stated. “The state is looking at it as a good demonstration piece.”

The project came about after Jefferson School closed in 2005. “We, meaning myself and the others involved in the development, had a concept of doing a net zero development,” said developer and project manager Mark LaCroix KCL Engineering.

LaCroix and other developers were brought to Charles City with the thought of placing a water wheel in the Cedar River. That was when Brownlow took them out to the Jefferson School site. Parkside Development LLC then approached the Iowa Economic Development Authority about the potential development.

“Everyone wanted to move on (the project),” LaCroix said. “It was our first rodeo, we wanted a lot of support.” They got it from Jeff Geerts of the Iowa Department of Natural Resources, local banks and the school system.

The project consisted of the reuse and development of 6.7 acres of blighted land located in the middle of an existing residential area and Enterprise Tax Zone. Thirty affordable, high-performance homes would be constructed, plus infrastructure such as utilities and road.

Best practices were brought into the subdivision as part of an integrated and holistic approach. On the energy side, the subdivision utilizes geothermal and solar technology; each home also received high-efficiency heating and cooling systems, Energy Star appliances, net metering, heat pump water heaters and low-water consumption plumbing fixtures.

“We are putting kW solar panels on the homes,” LaCroix said, noting each home will have a minimum of 4 kW of photo voltaic. “(The homes) will be close to net zero depending on homeowners’ (energy use).” So far the hers ratings, which gauge energy efficiency, have been low — a good sign they are on track.

Beyond being net zero on energy, they also wanted the project to be net zero with water. Conservation Design Forum — the firm behind the Chicago City Hall green roof — brought storm water best practices into the project, including permeable streets and bioswales.

“The city really wanted to showcase (practices) they were already doing on their own,” Price stated. “Additionally, it addressed downstream and storm system issues they were experiencing.” Charles City is on the Cedar River, so in addition to its white water park, clean water was very important to the city.

It also shows how cities can slowly retrofit through redevelopment of existing sites while also avoiding sprawl. 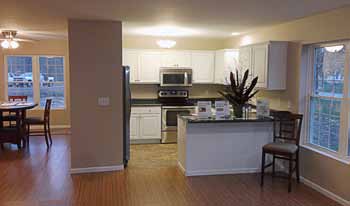 Geothermal energy was used for in-floor radiant heating in the homes. (Photo provided)

“We accessed a couple of different grants. One is a Sustainable Community Demonstration Grant that was made available through the Iowa Economic Development Authority; the intent of that grant is to demonstrate sustainable practices that can be replicated elsewhere,” Brownlow said.

“The city was the applicant on that grant. We received $500,000 to install the shared geothermal system and for bioswales and other storm water best management practices on the site.”

The second grant was to fund single family new constructions — also through ieda — and was only available in counties that were part of the presidential disaster declaration for the 2008 floods.

“The developer applied through the program for down payment assistance for up to 30 homes for qualified buyers,” Brownlow said.

“The amount of assistance is 25 percent of the sales price with the assistance being forgiven over five years for the qualified buyer.”

While reviewing the application for that grant, Brownlow added he noticed there was language about “infrastructure in support of the housing.”

“We were able to use that provision to apply for funding to extend the sewer and water utilities and to construct the permeable paved road into the subdivision.”

That, however, has provided a challenge during development, because the price of the homes was fixed at $150,000.

“Thirty of the 38 lots require homebuyers to meet and qualify for the LMI (low/moderate income) requirements,” LaCroix said.

To keep home prices down while still obtaining the NZE goal, developers turned to structural insulated panel construction and got the walls up in three days prior to constructing the roof. SIP comes with insulation, helping them meet not only their budget but also their time frame.

“It really was a collaborative effort,” LaCroix said. “Without the banks, city and school, I don’t think the project would have gone.”

Financing can be a big hurdle in getting a project like this going, and Brownlow said complying with grant requirements can also be a challenge — particularly for someone like their developer, who does not work with grants regularly.

So far, LaCroix stated they’ve received a good response from realtors, in addition to prospective buyers, with two homes sold. Others — both single and twin homes — continue to go up in the subdivision.

“It’s a great thing for the town. We are very excited about it,” LaCroix said of the project, adding they plan to replicate the project and are already talking with several municipalities about launching potential developments.

“We feel very fortunate to have had the opportunity to do a project like this,” Brownlow said. “I think perhaps the one thing that we did that I would suggest other cities do is to assist the developers as much as possible through the grant application and administration process. Also, we kept the project under wraps until we were ready to proceed and had answers to all the questions we expected. Behind the scenes we did a lot of prep work putting the developers together with realtors, bankers, etc., so they would have a good group of partners, familiar with our area, to assist them.”