The Association for Nonsmokers-Minnesota and Tobacco-Free Youth Recreation joined together in 2016 to produce a policymakers guide for tobacco-free parks, and they encourage parks to come up with a policy and offer signs to help.

The guide lists several reasons for taking action, stating that the purpose of park areas is to promote community wellness, which the development of tobacco-free policies align with.

These organizations claim that cigarette litter is not only visibly unappealing, it’s dangerous. “Discarded cigarettes pollute the land and water and may be ingested by toddlers, pets, birds and fish.” 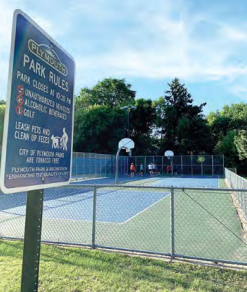 This sign at Bass Lake Park in Plymouth, Minn., lists the park rules, including that no smoking is allowed in the park. Diane Evans, director of parks and recreation, said the city’s policy is enforced through “peer pressure” – users reminding violators that the area is tobacco free. (Photo provided)

Having tobacco-free policies sends a message that this is not acceptable behavior for young people or adults. Secondhand smoke has proven to be unsafe, even outdoors. According to a 2007 study in the Journal of Air & Water Management Association, secondhand smoke levels in outdoor public places can reach levels as high as those found in indoor facilities where smoking is permitted.

According to a study conducted by the University of Minnesota in 2004, most Minnesotans supported tobacco-free parks and recreation areas—76% of Minnesota residents, 66% of golfers and 73% of families with children support these policies. Seventy-nine percent of survey respondents supported policies prohibiting all forms of use, including “spit tobacco” and 53% supported prohibiting tobacco use in parks at all times while 79% felt policies should be enforced by asking to leave the facility and 64% felt violators should be fined.

Park directors also support these policies with 90% of park directors in cities with policies reporting that they would recommend tobacco-free parks to other communities. Out of 257 park directors 96% responded that they wanted to provide a positive role model to youth, 92% wanted to reduce youth’s opportunities to smoke, 92% wanted to avoid litter from cigarette butts and 89% wanted to promote community well-being. Having these policies reduced litter and maintenance costs by 58%. As far as compliance, this study reported that 74% reported having no problems with users violating the policy.

Although tobacco-free parks seem to be a growing trend, several municipalities in Minnesota have had such policies for over a decade.

Plymouth, Minn., adopted its policy in October 2003. Plymouth has 66 developed parks—totaling 1,700 acres—including three public beaches, seven special use facilities, nine playing fields and 58 city and school parks plus the city maintains 170.5 miles of state and regional trails that connects most neighborhoods to parks.

Park Director Diane Evans said Plymouth’s is just a policy not an ordinance, and she anticipates it’ll remain that way.

“It’d be difficult for police to issue tickets in the parks—they’d always be policing them,” she said.

The only change the city has made over the years, according to Evans, is to include electronic cigarettes. The first few years the city handed out cards to people about the policy, and if they saw something, staff would remind people of the policy.

Enforcing the policy has been “like peer pressure — parents telling others, ‘please don’t use’” these products in the park Evans said.

Plymouth has had its policy in place so long it’s just accepted and there are no complaints.

“I wasn’t sure the council would support it at first, but they did pretty easily,” Evans said.

Plymouth isn’t enacting any fines, just a reminder that the parks are tobacco free and people have been compliant.

For those thinking of starting such a policy, her advice is to “make sure you give it a lot of PR in the community. Use your staff to help and advise the police department and employees about enforcement. Our park users help communicate it to other users.”

There are other cities and towns in Minnesota that do have penalties for violating the ordinance. Chatfield passed its ordinance in 2010 and has a $25 fine. Eden Prairie even prohibits tobacco use inside motor vehicles on park property, and violators have committed a petty misdemeanor with a $100 fine. Orono is very similar to Eden Prairie’s also prohibiting use in motor vehicles on park property and a $100 fine. Spring Park’s ordinance was passed in 2011 and doesn’t mention use in motor vehicles except for those that are city vehicles. Violators will be issued an administrative citation and would be fined an amount “determined by the city council from time to time.”

Most municipalities reported little to no complaints and much cleaner parks. That University of Minnesota study showed 81% of park directors reported no change in park usage, 71% less smoking and 58% cleaner parks.

Whether your city or town opts for a self-enforcing policy or a penalty-based ordinance, either route seems to have made a significant difference and healthier parks for all.

NEXT: ‘Cooking with Fire’ spotlights good food, life as firefighter