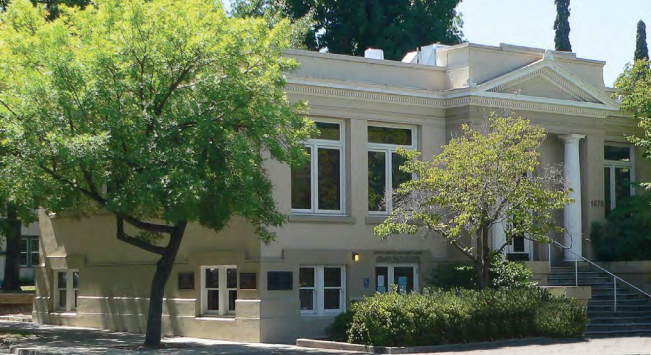 Though the time for “spring” cleaning is long past, there are still debris-littered hedgerows and various items of refuse and trash in municipalities that periodically will need to be cleaned up. Two cities featured here have taken the lead and passed the baton to their volunteers who keep their communities sparkling clean.

Give a shout-out to Krysi Riggs, longtime executive director of the Axiom, a popular youth center in historic Oroville, Calif.; a member of the Oroville Parks Commission; an enthusiastic cleanup volunteer; and the founder of Service Saturdays.

“I have found that our city parks and trees and public works departments are severely understaffed, and though I can’t fix a pothole or a street sign, I knew a good team of volunteers and I could make a big impact by taking on some of the lower-skill tasks, freeing up city staff to focus on the other more major items,” Riggs said.

Interested residents, including local business owners, all with a huge amount of civic pride, came together last April to meet on this year’s first Service Saturday where they experienced camaraderie as a gung-ho, can-do group.

Th ey were asked to bring work gloves and yard items such as rakes, brooms, hedge trimmers, leaf blowers and plastic yard bags, said Riggs, adding the Service Saturdays began about two years ago with one Saturday a month from April to October being designated as a Service Saturday from 8-11 a.m., weather permitting.

“Teens from Axiom are often there to help,” said Riggs. “Our students also regularly walk through downtown and do trash pickup (for a small bribe like a bag of chips or soda). Additionally, the YMCA kids and their families have been heavily involved in the Service Saturday activities — their whole karate class comes and does the cleanup before class.”

The group likes to accomplish its work before businesses open so the rest of the day off is free. People congregate in groups such as customers from participating businesses, high school students, families and Oroville Garden Club members who help with the city’s planters.

Some of the Service Saturday activities include raking out the debris from under hedges; weeding; filling the garbage and yard bags with trash; pulling old bulletins, notices and posters down; and more.

Even though the initial spring cleaning is over, Riggs said the town will continue to do these events monthly, weather permitting.

Wade Atteberry, public works manager of Oroville, had nothing but praise for Riggs and the monthly community cleanups.

“The Service Saturday group is a tremendous help to the city of Oroville,” Atteberry said. “Krysi has done a wonderful thing for the community. Like most cities, the city of Oroville ran into hard times when the redevelopment funding went away. We have seen major cutbacks and layoffs throughout the city. The parks and trees staff is responsible for keeping the downtown planters pruned and clear of trash. They are also responsible for the general cleaning of the parking lots and other responsibilities throughout the downtown area. With cutbacks the department was and is struggling to get to things in a timely manner.

“Krysi and her group, Service Saturday, stepped up in a big way and brought the downtown community together. They do a fantastic job cleaning and sprucing up the downtown. We have had other volunteer groups work in other areas. All the help is appreciated but most groups fizzle out after one or two cleanups. The Service Saturday group stands out because of its longevity and commitment to making the downtown a pleasant place to visit.” 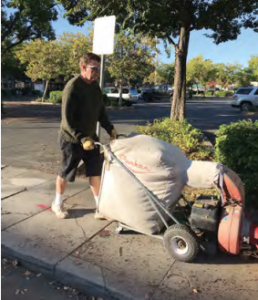 Andy Smith vacuums the sidewalk after raking on a Service Saturday in Oroville, Calif. (Photo provided by Krysi Riggs) 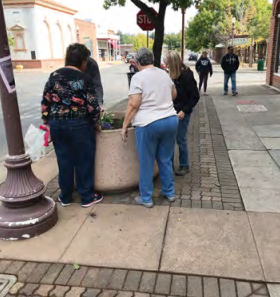 Members of the Garden Club of Oroville, Calif., clean out the sidewalk planters and add new flowering plants. (Photo provided by Krysi Riggs) 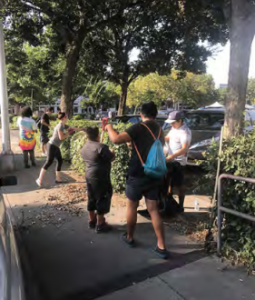 Axiom kids and volunteers in oroville, Calif., clean up leaves and touch up hedges. (Photo provided by Krysi Riggs)

Although Atteberry does not participate in the actual cleanup day, Riggs said, “Wade serves as our city partner and is an amazing example of how the city can effectively partner with service groups to accomplish goals.”

What was the catalyst for starting the whole cleanup?

“In February, our area was hit with heavy rains and flooding for an extended period of time,” said Groff. “Once the waters receded, there was a lot of litter and debris left behind. Add that to an accumulation of ‘intentional’ litter, and the result was a lot of trash in our beautiful community. City council knew this wouldn’t be solved by city employees alone—and they also knew our community would step up and help.”

According to Mayor Tom Taylor, “Sometimes you don’t see the problem until it is pointed out. Then, you see it everywhere. We wanted to bring awareness to the issue and create an avenue for citizens to help.”

In order to create interest and ownership in the effort, the council issued challenges to the business community as well as to individuals. The success of the event proved to be a direct correlation to the coordination efforts between the council and its community, Groff pointed out.

“It wasn’t always a tag in a post that was successful, but often was the follow-up with a personal call. This can be time-consuming, but rewarding since it provided an opportunity to connect with community members in a different way.

“Posting and tagging comes easily for some but not everyone. Some caught on quickly and posted right away but others struggled with the social media aspect of the challenge. Time was a big issue, too. April is a busy month for our community and finding a time to gather and clean up proved a challenge for several of our organizations. Having the event for the entire month of April helped, and many of the challenge posts came in after April. Another challenge that turned into opportunity was some citizens called in or posted areas that needed to be cleaned. While we originally thought those citizens would clean the areas they pointed out, it turned out to be a great way to give participants ideas of places to clean up.”

The concept was an easy one: take a photo of the debris before and again after cleanup and then post the photo on social media using the hashtag #TrashtagMaryville.

“This is how we would track participants, repost and keep the challenge going.” said Groff. “Many of our employees and citizens do not use social media, so this aspect of the effort either had to be done on their behalf or it wasn’t shared and maybe we missed some.” 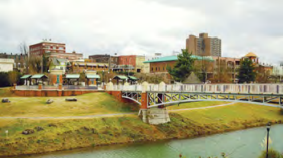 What was the cost to the city for supplies, PR and other efforts?

“We worked with our local beautification organization, ‘Keep Blount Beautiful,’ to make supplies available to those who needed them. Since KBB has supplies on hand as part of their mission, this took the burden off the city. The city did not purchase any additional supplies but used items on hand to assist some of the participants.

“We relied on social media — and organic shares to promote the event. We did not purchase any ads. Our local daily newspaper also helped promote the event with a couple of feature stories. Other than salaried staff time, no additional expense to the city was incurred. Bags of trash that were sent to the landfill would have an associated charge — but this is part of the city’s normal budget. Some organizations gathered truckloads of trash and absorbed the cost of disposal.”

Once the event ended, the staff posted some thank-you notes with the tagline, “Let’s keep it going.” Some posts were seen after April and the staff ’s intention is to do it again next year with more emphasis on the “Keep it going” aspect.

No prizes were given, just bragging rights, Groff said. Participants were recognized by the use of social media and by the city council at its monthly meeting.

Part of what made the event so much fun, according to Taylor, was that large numbers of community members participated.

“In fact, the public areas of the city were soon picked up so well that when I was doing a photo shoot for one of the Knoxville TV stations, I actually had to go to the site and ‘plant’ trash so I would have something to pick up while the cameras were rolling!

“Another fun event was when Jane asked (actually forced) all the city council to go out and do a roadside pickup as a group. She outfitted us with safety goggles, rubber gloves and pickup tools and sent us out to one of the most heavily traveled streets in town. Every car that went by recognized us and honked or yelled encouragement — I assume it was encouragement — out the window to us. A few even parked on side streets and came back to walk along with us and chat. Nobody helped pick up trash, but they did stop and visit.”

Since this was modeled after the ice bucket challenge, everyone understood the concept, so via the challenges, the project spread across the city very quickly.

“I think that it enjoyed heavy participation because it was centered around an intensive effort with a specific time window and had an entertaining, well-developed strategy,” said Taylor, adding this was probably a program that could easily be adapted to fit almost any community.

NEXT: Keeping parks cleaner and healthier with no-tobacco policies