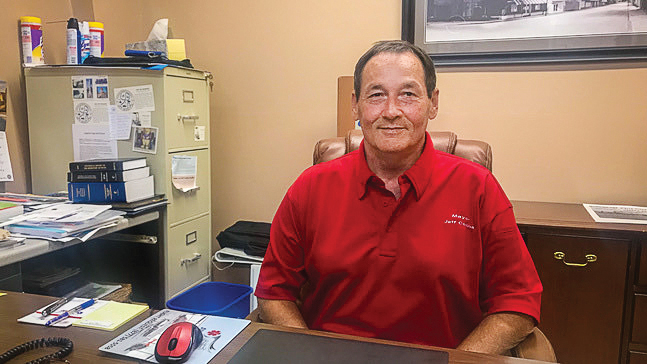 Jeff Collins sits at his mayoral desk. He was elected mayor in 2019 after serving on the city council. (Photo provided)

Not that long ago, Jeff Collins of Augusta, Arkansas, was the last person one would want to run their city or town.

As the one-time owner of a trucking business, he began to use methamphetamines as a means to stay awake on long road trips, but like most users of the highly addictive drug, it began to destroy him.

After 20 years, his heart gave out due to a completely blocked main artery. 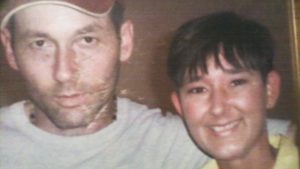 Collins struggled with substance abuse until his heart gave out due to a completely blocked main artery. After that, his addiction to methamphetamines and other substances vanished, allowing him to pull his life back together. (Photo provided)

Collins said a heart surgeon tried to revive him with a defibrillator four times over the course of several minutes. During that time, he was considered clinically dead. Collins would attest to that and said he nearly spent the rest of eternity damned.

“The night that I died and laid on the table, I was at the gates of hell in the out-of-body experience I had that night,” Collins said. “I’m a firm believer, with all my heart, that God himself took me to the gates of hell to show me exactly what real hell was.

“He wanted me to see firsthand what real hell was so that I could be able to tell my story because he knew that night that I would be making a choice, and he knew that I was a warrior.”

Collins said the surgeon attempted to revive him once more and miraculously, he woke up.

The doctors were shocked, according to Collins. They didn’t believe he could survive given the damage he had sustained to his heart.

Yet, when Collins went back to the surgeon two weeks later, his heart was fine and his addiction to methamphetamines and other substances was gone. He took it as a sign that he needed to significantly adjust the path he was on, and within 10 years, after serving on the city council as the alderman, the residents of Augusta trusted him enough to elect him mayor.

“Now here I am, the mayor,” Collins said. “It’s such an awesome feeling to know that I’m sitting in the mayor’s office of the town that I grew up in, where every single person knew that I was an addict and most of them knew I was strung out. They all said, ‘I told Jeff he ain’t never going to be worth a crap. He will never be worth a damn.’”

He uses his position and his story to hopefully turn the lives of others around as well while he manages a small municipality, with an economic outlook that’s changed significantly during his lifetime.

“We’re a small town. We’re 2,500 people in this town,” Collins said. “We don’t have any big industry left. At one time, we had four big factories in this community and we only have one left.”

Now he said most people commute out of town for work and he has trouble convincing young adult residents to stay. 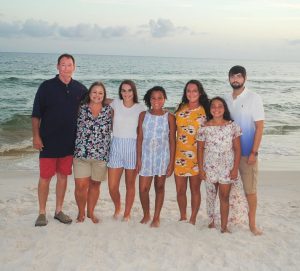 Collins is pictured with his family. (Photo provided) 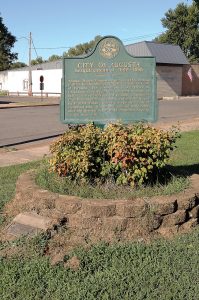 Pictured is a sesquicentennial sign placed in 1998 to honor the city of Augusta’s founding by Thomas Hough in 1848. Hough named the city after his favorite cousin, Miss Augusta Cald, of Virginia. (Photo by Brandonrush via Wikimedia; creativecommons.org/licenses/by-sa/4.0/) 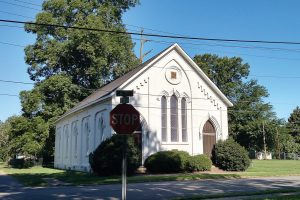 Mayor Jeff Collins hopes to tap into Augusta’s history during his tenure as mayor, with the desire to refurbish old churches and create walkthrough museums. Pictured is the Augusta Presbyterian Church that President Woodrow Wilson attended as a child. (Photo by Brandonrush via Wikimedia; creativecommons.org/licenses/by-sa/4.0/)

What Collins is now attempting to do is highlight what the town does have, which is an unassuming history and world-class duck hunting. He’s decided to refurbish old churches, including the one President Woodrow Wilson went to as a small child, and create several walkthrough museums, hoping to attract hunting tourists to other aspects of the town.

The biggest advantage that Collins said his town has is that it’s the only city in the state that owns and operates all of its utilities, including water, electricity, gas and garbage.

“We actually generate our own money,” he said. “So we’re very unique in that we’re able to tap into things that a lot of towns and cities can’t. And I think in the past, administrations haven’t tried to tap into those things. So that’s what I want to do. I want to bring a different look to our town.”

That doesn’t mean Collins has stopped giving back to the people he said he once did nothing but leech on.

“Here I am now, in this office, and the same people who I used to run around and get high with have to come in here and ask for help,” he said. “Because with us owning our own utilities, we’re able to help people. If an elderly person or somebody has trouble and says, ‘I can’t pay my bill this month,’ I am blessed because we own this electricity so I can give you a break.”

NEXT: Portsmouth moves toward becoming a gigabit community

They can also see firsthand the transformation he’s undergone and realize anyone can turn their life around.