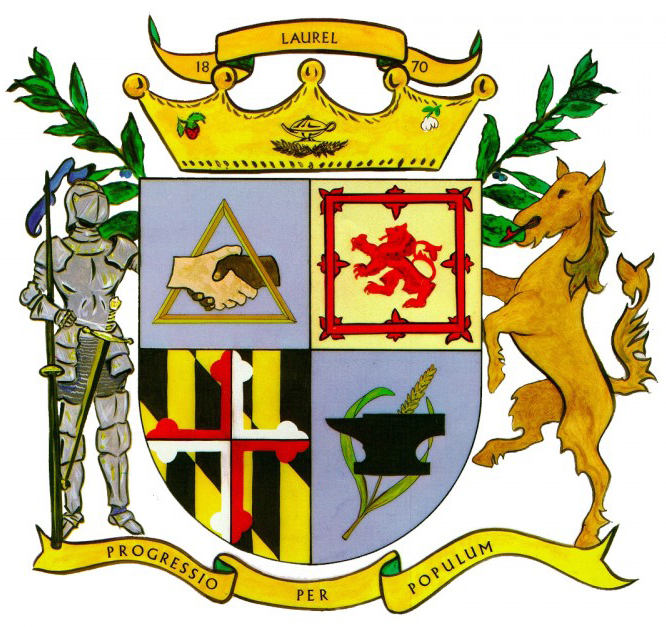 The city seal of Laurel, Md., has a lot going on.

The seal, adopted by the mayor and city council on the city’s centennial in 1970, combines elements of heraldry, royalty, agriculture, industry, community and geography.

“An examination of the emblem will reveal branches of a laurel bush on either side of a kingly crown that bespeaks the original British allegiance of the Calverts and other early settlers of Maryland,” according to www.cityoflaurel.org.

“The snowdrop and strawberry in the crown are pictorial representations of the interrelated Snowden and Capron names, the Snowdens needing no introduction and Horace Capron being the internationally famous resident who, while he lived here in the 1840s, shook us out of our lethargy and made Laurel Factory a well-known agricultural and commercial Maryland town.

“The clasped hands signify brotherhood, and the triangle reminds all that Laurel pinpoints the conjunction of Prince George’s, Anne Arundel and Howard counties.

“The silhouetted lion and its fleur-de-lis decorations are taken whole from the Prince George’s County seal and flag. The anvil proclaims the early Snowden preoccupation with mining and smelting iron, and the sheaf of wheat, the cog-wheeled gristmill that eventuated into a major commercial site.

“The horse and knight remind all that Laurel’s racetrack and nearby military and other governmental installations have given the town’s name new celebrity in modern times. The motto, ‘Progressio Per Populum,’ is the Latin way of saying ‘Progress Through People,’ rather than through luck or happenstance.”

Though the city of 25,723 is a relative newcomer as an official municipality, its history starts with an extremely early settlement.

Richard Snowden arrived in the area in 1658 and built a home near the Patuxent, a powerful river southeast of present-day Laurel. Several successive generations of Snowdens spearheaded the growth of the settlement, which was known as Laurel Factory until 1875. Iron, cotton, grist and saw mills were commercial mainstays during Laurel’s early history.

Horace Capron married into the family and established a cotton manufacturing company in 1835, employing approximately 500 townspeople until the facility burned down in 1855. It was immediately rebuilt and operated until “obsolescence necessitated its removal in the mid-1940s.”

During and after World War II, the local population burgeoned, courtesy of nearby Fort Meade and the government employees of the National Security Agency. Laurel serves as a bedroom community to Washington, D.C., 20 miles to the southwest.