While cities throughout the country typically celebrate the more traditional holidays such as Easter, Christmas and New Year’s, the residents may not celebrate these holidays in the same way. In fact, some cities and towns choose to make the holiday its own by creating unique traditions. These unique traditions tend to showcase the particular city’s heritage or industry. 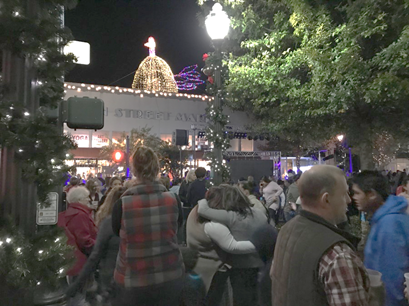 Known as the poultry capital, Gainesville, Ga., welcomes the Christmas season in style with a lighting ceremony, featuring a large chicken atop a local business. (Photo provided by the city of Gainesville, Ga.)

“Gainesville is known as the poultry capital of the world. As poultry is one of the largest industries in our community, we have come to embrace that title with fun events such as our Spring Chicken Festival and also our real chicken tourism ambassadors that ‘free range’ Gainesville and share stories about our attractions and events,” Regina Dyer, Gainesville Convention and Visitors’ Bureau manager, explained. What better way to celebrate Christmas then with an annual lighting of the chicken? The lighting of the chicken coincides with the annual Jingle Mingle event.

“Jingle Mingle was an event that signaled the start of the holiday season and when one of the downtown buildings placed a large metal chicken sculpture on the roof of its building in 2013, we thought what a better way to kick of the holidays then the lighting of the chicken,” Dyer commented.

In 2017, the tropical winds from Hurricane Irma took out the beloved chicken structure. A partnership between the building owner, the city, a local construction firm and a technical college brought the chicken back, bigger and better than ever. “The 25-foot chicken is a proud reminder of Gainesville’s resilience and a quirky event that each year brings thousands to the downtown square from all over the region,” Dyer affirmed. It has since grown to include a sound and light show along with a crowd countdown. 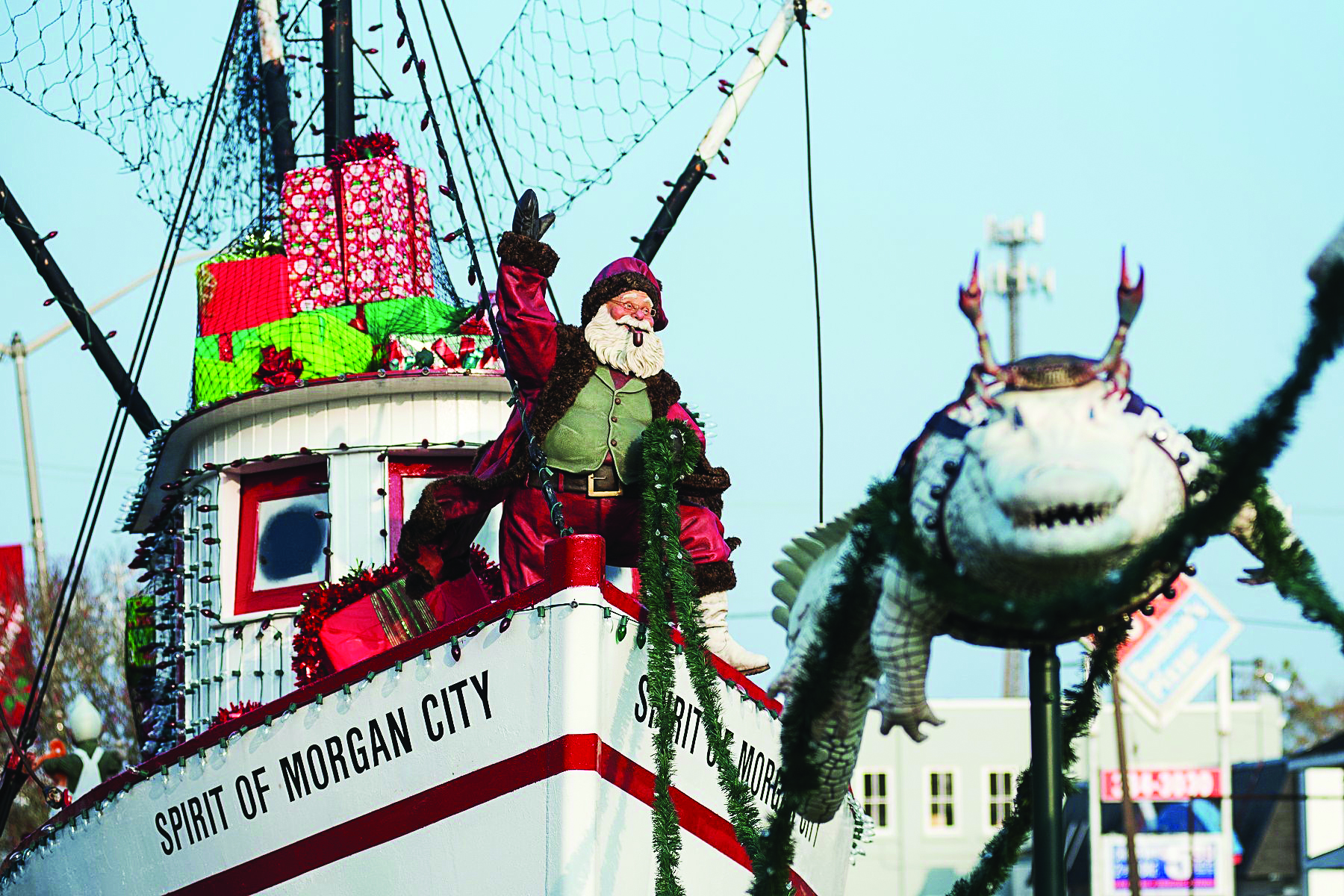 Since the city’s mayor was a former classmate, Romaire contacted him about creating something special for his hometown and donating an updated Christmas display. While he briefly considered a typical Santa and reindeer display, he ultimately chose to incorporate elements from the surrounding area instead. This idea made his display Cajun themed with a Santa wearing shrimper boots and muskrat fur on his jacket and white alligators leading the boat instead of reindeer.

Bringing this display to life took about a year with 12 to 15 artists working on the project. Romaire acted primarily as creative director while also sculpting a few of the pieces himself, including Santa’s face. The Santa was sculpted using traditional methods, with a 3D computer aiding in design and routing being used. For some of the alligator parts, 3D printing was also used.

Each year the city crews will be responsible for putting up and taking down the display. The plan is for the display to be put up before Thanksgiving each year with an annual lighting ceremony on Thanksgiving night. This Cajun Christmas display will remain up until around the second week in January. 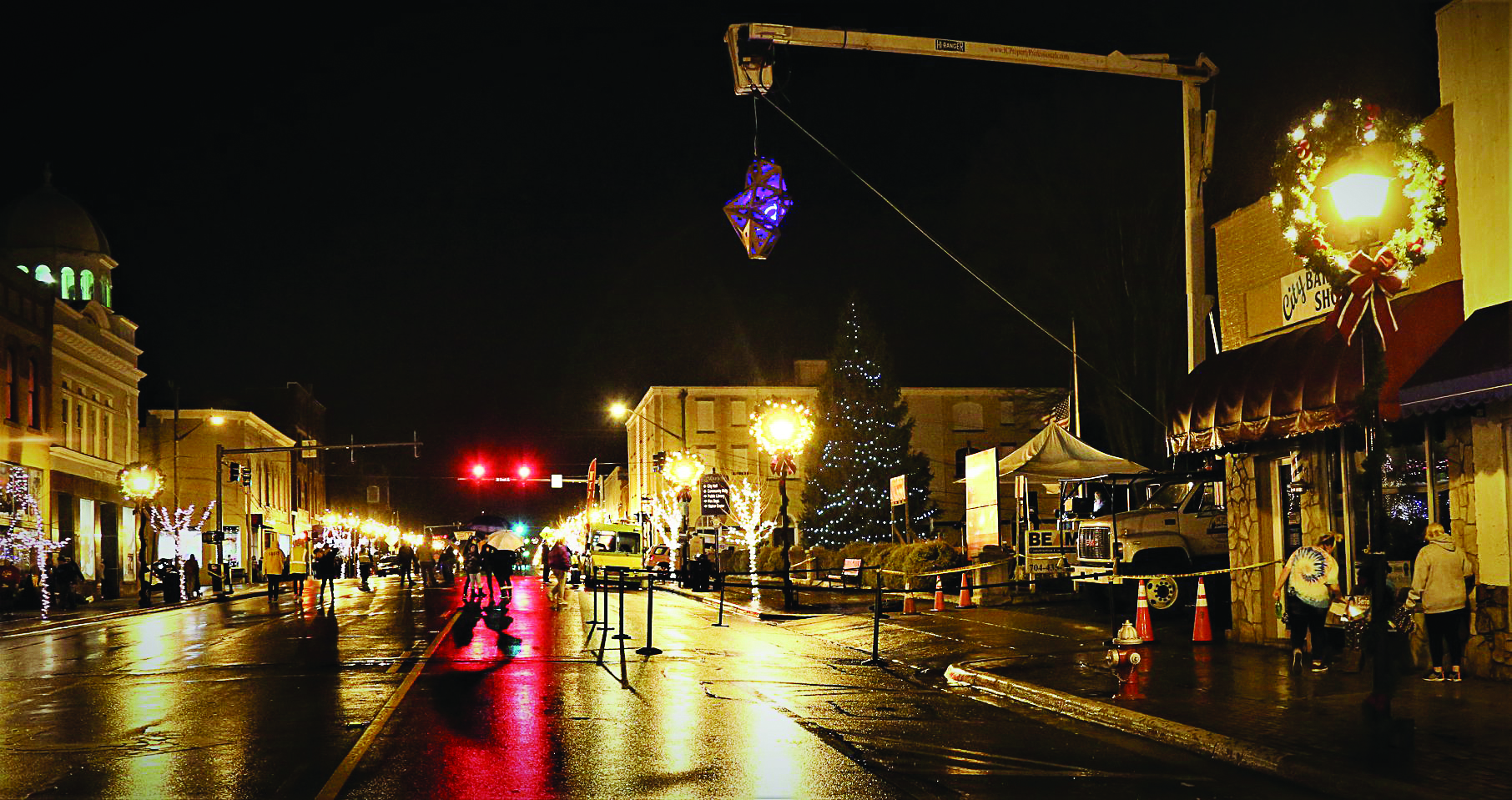 The city of Marion, N.C., chose to ring in the new year by combining two of its local industries. Originally the city would drop a gold nugget in honor of the early gold rush days and the local Gold Foundation. After a downtown doughnut shop won a prestigious award, the city chose to drop the gold nugget into a giant, edible doughnut each year. (Photo provided by the city of Marion, N.C.)

The famous gold nugget drop in Marion, N.C., has been a collaboration between the city, the Marion Rotary Club and various community organizations and businesses. The committee that plans the drop is made up of rotary members, city staff, chamber of commerce staff, emergency services personnel, members of the nonprofit community and local residents. The committee begins planning the event shortly after each celebration and meets regularly throughout the year.

According to Landdis Hollifield, executive assistant to the city manager and public information officer, “The city of Marion began its New Year’s Eve gold nugget drop in 2009 as a nod to McDowell County’s gold heritage. Many people do not realize it, but the gold rush in the U.S. actually started in western North Carolina. McDowell County, where the city of Marion and North Carolina Gold Foundation are located, played an integral part in that history.”

The first gold nugget was designed by the Gold Foundation and dropped every New Year’s Eve until 2016. After that it was replaced with a more modern gold nugget created by the local Turtle Laboratories. In 2015, a unique addition was made to the New Year’s tradition.

A local donut shop, Mr. Bob’s Do-Nuts, won first place in the Food Network Magazine’s Apple Ugly Contest in 2015. The city decided, in 2015, to include this honor as part of the celebration. Since then the city has dropped the gold nugget into a 10-foot doughnut made by Mr. Bob’s.

“Adding the giant doughnut to the nugget drop seemed like a sweet addition to the New Year’s Eve celebration,” Hollifield said. 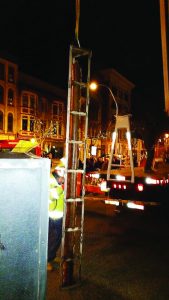 This year will mark the 24th year of Lebanon, Pa., teaming up with Godshall’s Quality Meats for a unique bologna drop. Each year Godshall’s donates a 12-foot, 200-pound bologna that is raised up and dropped at midnight. (Photo provided by the city of Lebanon, Pa.)

This year the event kicks off at 8:30 p.m. Tuesday, Dec. 31. It includes carriage rides, a costume contest, children’s story time, a historic ghost walk, music, vendors and a downtown scavenger hunt. At 11:59 p.m., the gold nugget will be raised and dropped at midnight using a cement truck from McDowell Cement Products. After the nugget is dropped, visitors are invited to take a piece of the doughnut to eat.

This year will mark the 24th annual bologna drop for Lebanon, Pa., as part of its New Year’s Eve celebration. This local tradition began in the early 1990s and was a collaboration between the city of Lebanon and Godshall’s Quality Meats.

Bologna was developed by the Pennsylvania Dutch in Lebanon County and became a common item by the early 1800s. Being produced in the county, it has become a staple of the community.

Each year Godshall’s Quality Meats donates a 12-foot, 200-pound bologna for the New Year’s Eve drop. On Eighth Street, between Chestnut and Cumberland streets, the bologna is raised and then dropped at midnight. The event also includes music, food and warm beverages.

The bologna drop is “reflecting the slow-cured and smoked sausage traditions of western Europe, specifically Germany,” Amy Kopecky, downtown Lebanon Main Street manager, explained. Once the bologna is dropped to the center of downtown, it is donated to the local food bank.

NEXT: A sign of the times for Charleston, W.Va.