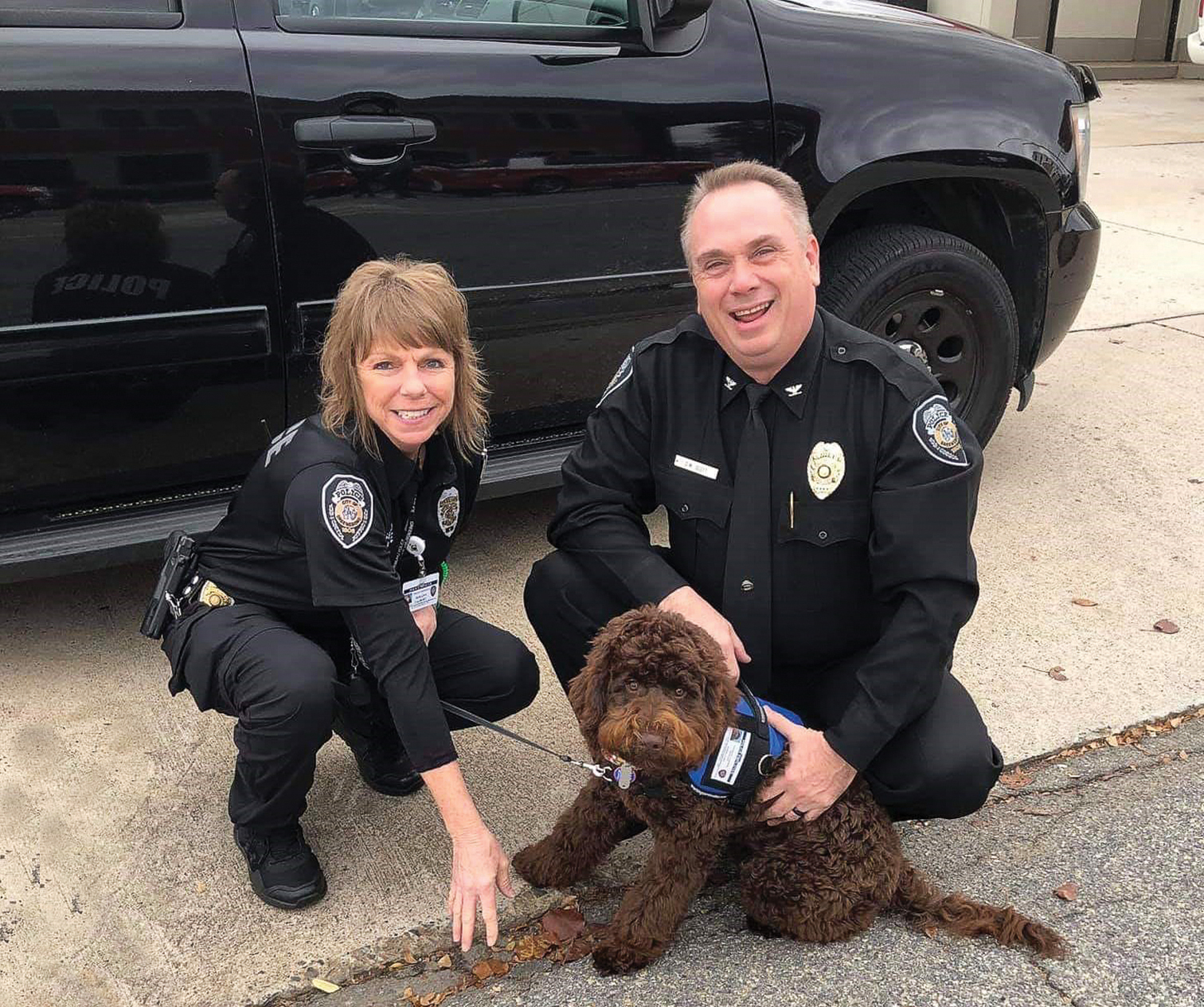 Ronald Glenn, public information officer of the Greensboro, N.C., Police Department, always experiences a thrill of happiness when he sees the reactions of the public when a comrade — Police Officer Porter — enters a room and happily interacts with the citizens.

Officer Porter is an honest-to-goodness uniformed police officer who is allowed to go anywhere he wants on the planet. The friendly, chocolate-colored 15-month-old Australian labradoodle K-9 officer came to the Greensboro Police Department in November 2018, according Officer Rosann Talbert, PO III, outreach officer and therapy dog handler assigned to the Office of Community Engagement.

“Porter is with me every day because he is officially part of my job as an outreach officer,” said Talbert, who began her police career in 1994 as an emergency 911 operator and dispatcher and as a sworn officer in 1999.

“Our purpose is directed at elementary school students. I have volunteer officers who assist me in the fifth grade classrooms who teach the ‘Students Overcoming Situations’ curriculum. Porter is the mascot for this program and is our gateway between the students and the officers. The kids are more relaxed and willing to interact with the officers who are in full uniform.” 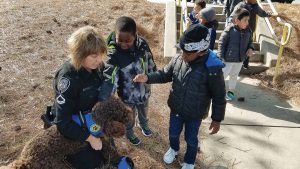 Porter receives constant requests to visit various places such as special education centers, city recreation facilities, funerals and public schools in addition to being the mascot for SOS, according to Talbert. Over the past nine months, he has been everywhere from daycare centers to retirement homes and was even in the Christmas parade.

“He has also joined Chief Wayne Scott as he threw the first pitch at one of our recent Greensboro Grasshoppers games,” said Talbert. “As you can see, this requires a lot of work for a 15-month old Australian labradoodle. Porter has joined me for personal eye exams and the like but isn’t quite ready to take on the trauma victims or medical facilities; he is doing quite well providing big smiles and a sense of well-being to our many citizens, departments and employees of the city of Greensboro and the Greensboro Police Department.”

Because Porter doesn’t shed, the type of hair he has does not cause allergic reactions in people with allergies. This makes him ideal for engaging with the public and lets him be the face of the police department.

“Technically an animal cannot be sworn in as there is no way to have it recite the necessary oath, but Porter is an official K-9 officer,” said Glenn. “There was not a ceremony, but we did issue Porter his own department-issued ID.”

Porter came to the GPD from Ausm Labradoodles in Sanford, N.C., said Glenn, where he had some basic obedience training.

“He was allowed to start visiting schools and community events as soon as he was a part of the department,” said Glenn. “His therapy training is ongoing as he had to wait until he was 1 year old to begin the advanced training and get advanced certification. He is in that process now.”

Given the bad publicity some police departments have had in the past few years, using Officer Porter as an approachable PR personality allows for positive interaction with the community. 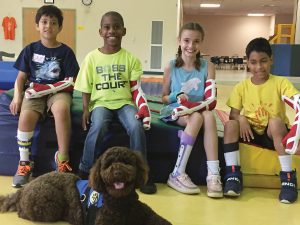 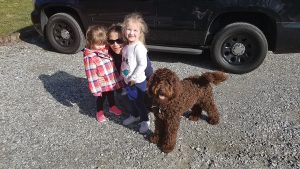 “Anywhere you take him, he is a conversation starter and of course people love to pet him,” said Glenn. “Most police K-9s are work dogs and are not allowed to be touched by the general public, but Porter gives them a way to interact with a police K-9 and learn about our department. The great thing about Porter is that he generates smiles wherever he goes. Even within our police department, the officers love to see Porter, and it is a great way to build relationships with our community.”

Talbert is the only officer who works with Porter. As with most police K-9s, the dog, as well as the handler, is trained to perform specific tasks. If the handler is not familiar with the dog and the training they will not be able to work with the K-9. Currently, the department has 15 working police K-9s that vary from patrol dogs to bloodhounds, but as of now, it has no other therapy dogs besides Porter who wears a vest with his ID attached to the top of it. Porter lives with Talbert at her residence and she is responsible for him 24/7.

“We have been together since November 2018 with the exception of an hour or two while I’m at church or shopping,” said Talbert. “Porter stays home in his kennel, or if I’m lucky, he spends some quality time with my mom. Porter has a professional trainer who has driven to Greensboro from the Lake Norman area to join Porter, and during a typical work day, visiting elementary schools and other various facilities so that she understands Porter’s role in the community, and Porter and I use this information to continue daily training.

Porter has not been used in the medical field but has been involved with various programs for children who suffer from physical disabilities. They walk him, feed him treats and rub his head and back.

“In the future, Porter will also work with trauma victims, although police officials say their newest recruit is in such demand that he is stretched thin already,” noted Talbert, adding that he needs some additional training for that role.

Other cities across the nation are already using empathetic therapy dogs in their police departments, including Pinole, Calif., and Independence, Mo. Some are going for poodles, retrievers, mixed breeds or Saint Bernards. Remember, too, when figuring in the cost of the dog, to include such essentials as top-quality food, veterinary care, home and department accommodations like dog crates, beds, toys and other items. Plan on spending anywhere from $3,000 to $4,000 for the dog upfront, plus annual animal maintenance fees of $2,000 to $4,000.

“Adding a therapy Ddog to your police departments is a major step toward building a relationship with the citizens,” said Talbert. “I like to take Porter for walks downtown and watch the reactions of these citizens that we encounter. People immediately stop for a few minutes to interact with Porter — this happy, fluffy K-9 — and are surprised that he is a police K-9. They pat him on the back or shake his paw.

“Finally, as a police officer, you are gratified to see the barrier begin to fall and be replaced with smiles and a new appreciation for the police therapy dog.”

NEXT: Get out: Managing evacuations in the event of an emergency