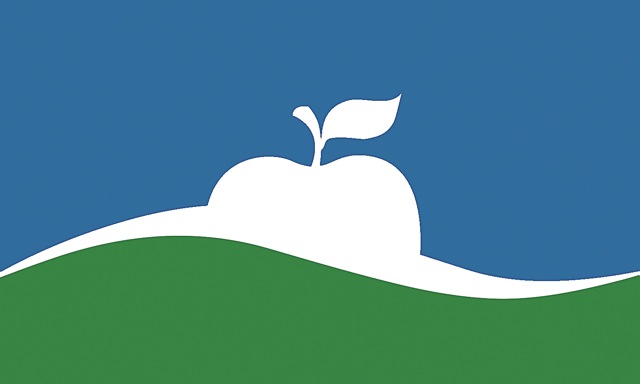 “Little Apple on the Prairie” was voted as Manhattan, Kan.’s, new city flag. Submitted by Kimberly Medvid of Pennsylvania, the flag is expected to be adopted during the cit commission’s August meeting. (Photo provided)

Affectionately dubbed the “Little Apple” over the years by its residents, the city of Manhattan, Kan., may not be on everyone’s radar. Vivienne Uccello, the city’s public information officer, explained that it is often confused with the well-known Manhattan, as in one of the boroughs of New York City. Hence, residents why refer to their city as the Little Apple as a play on New York City, the “Big Apple.”

Nevertheless, Manhattan, Kan., has gained a lot of attention recently due to a contest in search of a new city flag. The process has been over a year in the making, having started as a topic of interest in July 2018 after a Manhattan city commissioner listened to a “TED Talk” with Logan McDougall covering flag design. In his discussion, McDougall referenced the North American Vexillological Association’s five basic principles of flag design. According to vexillologists, or flag experts, the keys to good flag design, as taken directly from https://nava.org/good-flag-bad-flag/, are as follows:

“In order to run a flag contest, the city of Manhattan needed to rally the public to assess their interest,” stated Uccello. Utilizing polls on Twitter and Facebook, the public was asked a couple of important questions. They were first asked: “Are you aware the city has a flag?” This was followed by a second question: “Do we need a new flag?” The overwhelmingly positive response — 85% — alerted staff that it was the appropriate time to move forward and actually conduct the contest. 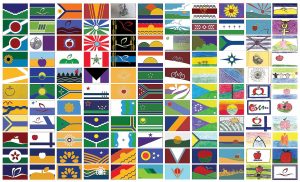 Manhattan, Kan., received 120 flag submissions during the month of March. Entries came from children, graphic designers, a local architecture firm and more. Entries were also not confined to the Kansas area, with some coming from as far away as Italy and Switzerland. (Photo provided)

Uccello further explained, “Before entries could be submitted, the city’s staff had to work out the logistics to ensure that they could legally use the artwork design of the winner without violating intellectual property rights.”

Once this matter had been handled, the contest was opened to the public. Contestants were provided access to the “TED Talk,” the five principles of flag design and the required dimensions for the flag. These were the basic requirements for entry into the contest. Participants were limited to three submissions and each one had to be accompanied by an explanation of the design.

The city’s staff received 120 submissions in total during the month of March, with some participants submitting more than one entry. The youngest contestant was eight years old while professional designers and a local architecture firm participated, too. The city’s staff was surprised to receive international entries from Italy and Switzerland, which reinforced the notion of a global community, as well as out-of-state submissions. Recurring themes among entries were obvious, including the theme of rivers, stars and rolling hills since — in contrast to Kansas’ generally flat topography — Manhattan boasts the Flint Hills.

Members of the local Arts and Humanities Advisory Board, a group of volunteers of different ages and from different professional backgrounds, were tasked with selecting the finalists using a scoring system based on the five principles of flag design. They individually reviewed the submissions, selecting their top three picks. Each member then presented the reasoning behind his or her choices. At that point, the group voted on the selections at hand, selecting 10 contenders.

The resulting 10 finalists were presented to the city staff, who then narrowed the number down to seven. Next, a graphic designer for the city met with staff and went to work polishing the rough designs, putting them into digital formats that would later be presented to the public.

In the first two weeks of July, the public — including children — was asked to cast a single vote via Survey Monkey or paper ballot located at city hall. Finalists were allowed to vote for their own design. The city received 3,021 votes in all, with the winner, Kimberly Medvid, receiving 29 percent of the votes for her design, “Little Apple on the Prairie.” 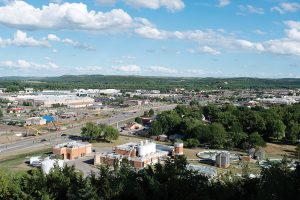 Pictured is an aerial shot of Manhattan, Kan. The city of more than 52,000 is often mistaken for New York City’s Manhattan borough, hence how the Kansas city acquired its nickname, the “Little Apple.” (Photo provided) 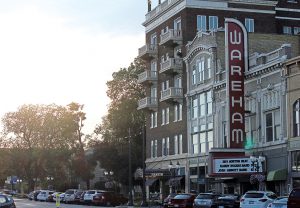 The Wareham Building is a landmark of downtown Manhattan, Kan. Its construction as a hotel began in 1925 before opening for business in 1927. Its ground-floor restaurant, Harry’s Restaurant, has been listed “Best in the Midwest” by Midwest Living, and its chef Cadell Bynum has earned three-time listing among “Best Chefs of America.” (Photo provided)

Interestingly, Medvid lives in Pennsylvania and has never actually visited Manhattan; however, she does know someone who hails from the area. Having learned of the contest, Medvid researched all there is to know of the city and its surrounding area before entering the contest. City staff switched out the original color scheme of predominantly red and green, substituting it for green, white, and blue before presenting it to the public for a vote. For a flag that would be featured year-round, they did not want it to suggest an overt Christmas theme.

The new color scheme was strategically chosen for its symbolism. The city is situated at the convergence of the Big Blue and Kansas rivers, as represented in the color blue, while the color green signifies opportunity and growth. White was chosen for the city’s unlimited future potential. 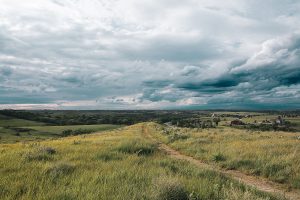 While Kansas is often depicted as being flat, Manhattan, Kan., is located in the Flint Hills area — a feature that was highlighted in many flag submissions. (Photo provided)

Consideration for adoption of the winning flag design will be an item on the agenda for the city commission’s meeting Aug. 20. A ceremony at city hall to raise the adopted flag will follow, likely taking place in September. While Medvid will be unable to attend, she will receive her very own flag and certificate of appreciation. The new flag design will also be displayed around the city, including at the local cemetery, parks and fire stations.

Now that the yearlong process has come to a close, Uccello offers some advice to other cities considering a similar undertaking. She recommends not rushing the process. There will be pitfalls and unexpected situations that arise. In fact, the process was delayed when efforts had to be diverted to controlling flooding in the area, which took precedence.

Equally relevant, Uccello was shocked by the strong reactions, both positive and negative, from the public. She stated, “Be sensitive to how people will react and be intentional and upfront in terms of the principles, concepts and the kinds of designs desired.” Most importantly, have fun with it.

Above all else, Uccello is so appreciative of the many artists and members of the advisory board who dedicated their time, talents and efforts to the creation of a new city flag image. Every individual played an invaluable part in such an important city matter.