One of the challenges with partnering with a company is that sometimes good employees do such great work the company hires them. (Photo provided)

When it comes to being a green, energy conservative city, success is split down the middle between choosing the right company to partner with and changing the behavior of city employees.

Thankfully Montgomery, Ala., has figured out a way to overcome those obstacles and come out on the high end of success.

A partnership with aligned priorities

In 2016, Montgomery partnered with Cenergistic to reduce the city’s annual utility spending, which had been totaling around $6 million. The energy conservation consulting company had been working with the school system, which led the school superintendent to suggest the idea to Mayor Todd Strange. 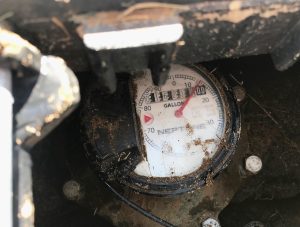 Due to discipline and supportive leadership, Montgomery saved more than expected — so much so that the original contract with Cenergistic was re-negotiated for an extension on top of splitting the savings 60/40 rather than 50/50. (Photo provided)

Montgomery had been approached by companies in the past, offering to implement new technology, but they could never explain their wares in a way that resonated with city leaders. Witnessing the positive impact Cenergistic had on the school system is what made the city consider the company on a larger level along with an educational approach.

To get the ball rolling, city hall completed a six-month trial that saved $52,000.

“The company wasn’t trying to get us to buy anything or sell anything other than their expertise. Cenergistic really went the educational route, and if there were no savings, there were no shares,” explained Strange. “We tried it to see what would happen and it worked. We’ve saved over $2 million, which put $1.2 million in our pocket, which could pay for more police officers, firefighters and public works employees. It’s been a win-win all around.”

Montgomery, known as a green and environmentally friendly city, has received awards for being a smart city. The partnership with Cenergistic is simply another part of the equation. Out of the hundreds of facilities, four have been given awards and are Energy Star certified.

Strange continued, “The big issue is that this speaks to millennials, who really care about the environment, and obviously having $1.2 million impacts our citizens positively. The fact that our city hall, where most of the power of government is, led the charge was important. It set a good example for others in our city to follow.”

After doing the math Strange added that $1.2 million in savings could mean the city could hire 24 additional employees at $50,000 salaries without raising department budgets. 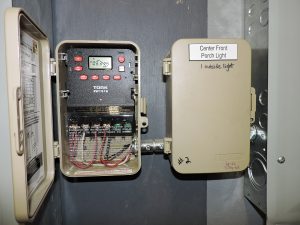 While there are hundreds of facilities, Montgomery focused specifically on 75 buildings that made up $3 million of the $6 million annual utility cost. (Photo provided)

Charlotte Prestridge, energy specialist at Cenergistic, acts as Montgomery’s “conscious,” according to Strange. She can be found personally checking facilities and reminding everyone to turn the lights off so all the energy that can be saved, will be saved.

“I evaluate the bills and usage. I’m focused on usage,” commented Prestridge. “Even if take-out prices have gone up with something like water, you can still track the usage to see if there are any leaks. We also have interval data in some buildings, which lets me see what time something came on when it shouldn’t have.”

Conveniently, Prestridge can monitor and set a variety of controls from a remote location. The system in place comes in handy for buildings that host events, allowing her to ensure everything is shut down when it needs to be.

“Do homework on the company you’re looking to do business with,” advised Tom Pierce, city director of general services. “The good thing about Cenergistic is they’re on the forefront of technology and savvy on getting those savings. In our agreement, we can do things like install LED lights or motion lighting to automatically save money and we’re not punished for upgrading to energy saving equipment.”

“Bringing in a third party into the city and giving them access to our buildings and controls was one obstacle we had to overcome,” stated Pierce. “It’s about becoming familiar and comfortable with the third party.”

Changing the behavioral habits of 2,700 city employees is no easy task

To make the program appealing, each department was given an incentive to participate. Whatever money the department saves, it keeps. Some departments allow their savings to rollback into general city funding.

Rather than having project budgets approved by the city leaders, the funds could be used for those projects, new equipment and other departmental necessities and improvements.

The idea of departments keeping their savings is what Strange considers to be the smartest action the city has taken. It also saves taxpayers money and overall perpetuates Montgomery’s initiative in being a smart city. 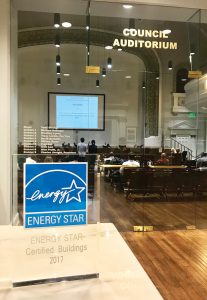 With building renovations, individual thermostats are placed in each room to control the temperature, which will lead to saving energy. (Photo provided)

“It’s changing the behavior that’s been ingrained for years. They’re thinking, ‘How dare a third-party outsider come in and tell me I can’t turn the heat up to 72’ or ‘Who says I can’t have a space heater at my feet?’” said Strange. “You have to have the discipline to say that this is the way it’s going to be, and the departments know they’re going to get some savings.”

The partnership also provided employees with knowledge that could be carried into their own homes. Pierce added that he’d personally applied what he’d learned to his home, addressing small things he wouldn’t have thought about beforehand and believes other employees are doing the same.

“I think people got on board pretty well,” said Prestridge. “When Mayor Strange got on board, everyone knew he supported this program. Tom shared emails to others I had sent to him about reports and cabinet members addressing issues. It wasn’t just me going around, but everyone teaming up.”

While there was skepticism that 24-hour buildings like fire and police stations could save money, those buildings accounted for 14-17 percent of savings. Even after the contract expires with Cenergistic, Montgomery hopes the educational understanding and energy-saving habits remain instilled in employees.

“We were one of the first governmental entities to do this kind of partnership,” Strange concluded. “You’ll always have risks in being the first to do something. My advice would be to try it. If you do and you’re serious about it, it’s not a losing scenario.”