Donations provide an often unexpected boost to municipal projects. While donations are largely positive, they can draw concerns from constituents of conflicts of interest, especially if being put toward projects that require bids. When the source of the donation is known, potential conflicts of interest can be addressed; however, when donations are received anonymously, it’s hard to gauge if any strings are attached. While the saying goes “don’t look a gift horse in the mouth,” city officials need to best represent the interests of their constituents and ensure that transparency is maintained.

“With any donation, anonymous or otherwise, there is always the concern that the donor may be expecting something in return,” Leslie Lenkowsky, professor emeritus of public affairs and philanthropy at Lilly Family School of Philanthropy at Indiana University, said. “This could be especially problematic in government, since we expect government to be impartial in awarding contracts, zoning and other things municipalities do, even to generous donors for municipal projects.” However, he noted, “Anonymity might make it more difficult to determine if a particular donor has obtained favorable treatment in return for the gift, but there are usually ways of penetrating the cloak of anonymity if, for example, a reporter or prosecutor was determined to do so.”

Fear of special treatment, particularly when awarding contracts related to projects receiving anonymous donations, have sparked community discussions in the past. In 2017, a Warsaw, Ind., resident alleged the city violated the Open Door Law after the board of works voted via email on measures related to an alleyway revitalization project; he further alleged the city violated the Access to Public Records Act after it didn’t release the names of anonymous donors to said project. Ultimately, Warsaw was found to have violated Open Door Law; however, it didn’t violate APRA as public agencies have the discretion to shield the identity of an anonymous donor if the donor requests it.

There are always bound to be complaints no matter what a city does when it comes to handling funds; however, in the department of donations, cities can honor donors wishes while also offering transparency to residents.

“The most important way municipalities can improve transparency is by reporting fully on what they do with the gift. That should not compromise a donor’s anonymity at all. But it should allay suspicions that the money was used for pet projects (including the donor’s) that are not desired by the municipality,” Lenkowsky said.

Looking to nonprofits is another great approach, as Lenkowsky noted, “Nonprofits, like colleges and universities, often receive anonymous gifts, sometimes very large ones. Usually they have some sort of committee that reviews such gifts before they are accepted. Municipalities can set up a similar mechanism, though they need to be sure it includes more than the mayor, say, and his friends or appointees.” Lenkowsky added, “In addition to seeing that the donor is not expecting any favors in return, the committee should ensure that if the identity of the donor became known, the municipality would not be embarrassed by any ‘skeletons’ the donor might have, e.g., be in the midst of an investigation of business practices. Again, this is a problem with any donation, though anonymity makes it more difficult to scrutinize.”

Whether a donation is anonymous or not, foundations have been put in place by many cities, predominately for parks and recreation departments. Kalamazoo, Mich., though, is taking the concept of foundations to a whole other level while involving the community as a whole. 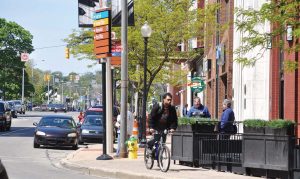 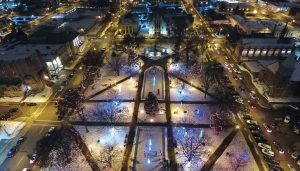 To bridge structural budget challenges felt by many Rust Belt cities, Kalamazoo, Mich., signed off on the Foundation for Excellence, which was made possible by local philanthropists who wanted to see the city and its residents thrive. (Shutterstock.com)

While Kalamazoo considered and structured FFE, a third party service surveyed residents to gauge their disposition toward the creation of a foundation and found that 80 percent of respondents were favorable to it. (Michigan Municipal League via Flicker; https://creativecommons.org/licenses/by-nd/2.0/

Like many Rust Belt cities, Kalamazoo was faced with structural budget challenges after the recession, which impeded its efforts to realize its vision for a vibrant, prosperous and equitable city. The only solution that could be found was raising a tax of some kind; however, such an approach would have been disadvantageous for businesses and residents alike. A second solution was found thanks to local philanthropists: namely, the creation of a foundation that would bridge the funding gap.

The foundation will provide $70.3 million to stabilize the city’s budget, lower its property tax rate while also allowing for $10 million of aspirational community projects per year through 2019. During this period, a community fundraising effort would be launched to create a fully endowed foundation that can sustain this funding in perpetuity. The foundation was approved by the city commission and mayor on Aug. 25, 2017.

Prior to that approval, Steven Brown, FFE coordinator/resource specialist, said there was a yearlong city discourse that included approaching members of the community. “A study was conducted (in 2016) by a third party service — a survey to gauge public disposition. It found that 80 percent of respondents favored the foundation.” Since things have gotten underway, he added, “The response overall has been positive.”

Emphasis was placed on doing the work right the first time. This included bringing in a consultant to establish best practices and choosing to prioritize transparency and accountability. Unlike private nonprofits, as a public foundation, the FFE’s meetings are open for everyone to attend.

“We go out of the way to have all resources available (to the public),” Brown said, adding there is a section on the website that contains agendas; meeting minutes; the bylaws; articles of incorporation; an annual newsletter that highlights projects, programs and initiatives; and more. “Money allocated to the city is approved by a city committee in the full light of day.”

Another step toward openness, Brown said, is the board is drawn from the community. Ten of its 15 members are stakeholder directors who represent important sectors like health care, education, business and faith. The remaining five are city directors and include the mayor, city manager, two city commissioners and an at-large director. The stakeholder and at-large terms rotate every three years while the city directors serve for the duration of their employment or elected service. The 2018 newsletter notes the push for inclusivity with the note that 40 percent of board members are female while an additional 40 percent are minorities.

“It’s an open application process,” Brown said of the community stakeholder directors, noting the applications are found on the website available to the entire public.

The foundation also provides a peace-of-mind buffer, with him noting, “Donors are very keen to ensure their investments are not plundered by the city commission.” On the other hand, the foundation limits wealthy donors’ ability to impact the governance of the city. The Foundation for Excellence’s bylaws and articles of incorporation further prevent any misuse of funds.

“It’s incredible for people to see what they are getting,” Brown said.

A major proponent of doing that is the annual newsletter. In the 2018 report, FFE shared its efforts to spur the expansions of successful youth programs while also supporting several park and neighborhood enhancement projects. Throughout the year, FFE supported many infrastructure projects in Kalamazoo, too, from walkability improvements and better lighting to tree care.

Lead pipes have been a nationwide concern, and the city of Kalamazoo has not sat on its laurels in addressing its lead water services. Thanks to the FFE and additional funding sources, the city’s lead service replacements are now funded at a rate to enable completion of system-wide replacements in 20 years. FFE alone has provided 23.7 percent of the founding while the rest comes from a grant awarded by the Michigan Department of Environmental Quality — 30.5 percent — and Kalamazoo’s water fund — 45.8 percent.

“It’s unique in structure and a very novel idea,” Brown said of the foundation, which is likely the only such foundation in the country. “It’s a model for other cities.”

For other cities, he noted, “You will need to have available donors. After that point to make it work, be clear, communicate well, create as much input as possible and encourage public discourse. Think structurally and long term. Founding documents offer checks and balances. You want to make sure they are structurally sound to move ahead on.”

For information about the Kalamazoo Foundation for Excellence, visit https://www.kalamazoocity.org/ffe.