↓
Home→Holidays→Cities tap into their presidential ties 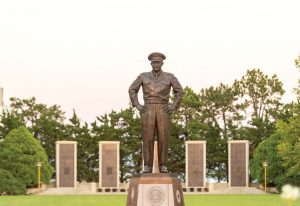 Pictured is an Eisenhower statue on the grounds of the Eisenhower Presidential Library, Museum and Boyhood Home. (Photo provided) 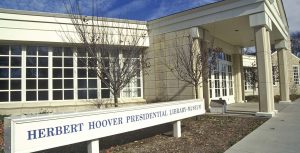 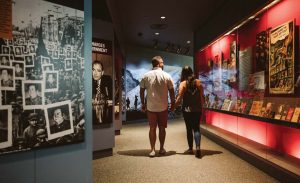 A couple browses the displays featured in the Truman Library and Museum. (Photo provided)

Some of these historic entities share partnerships with their cities and offer not only exhibitions but also online collections, a research room, student resources and archives; sometimes, the president’s former home, birthplace and/or gravesite are onsite as well.

The impact is more than just economic, said Wendy Shay, of the Historic Preservation Division in Independence, Mo., where the Harry S. Truman Library and Museum and gravesite are based. There’s a lot of goodwill, too.

“Our walking tours, workshops and lectures are always free,” said Shay, “and we have a concentration of them in May, celebrating Historic Preservation Month.”

Independence has a partnership with the Truman organizations, but it is mainly on public outreach activities, said Shay.

“The city doesn’t oversee any changes to those buildings or any kind of improvements because they are both federally owned and federally operated.”

Kristi Eckfeld, tourism manager of the city of Independence, provided a recent visitor impact study that listed the Harry S. Truman Historic Site as accounting for 49 percent of the total visitors to Independence.

“The Harry S. Truman Historic Site is the strongest functional driver of visitation for Independence at 36 percent,” said Eckfeld. “Most visitor parties are two to three people who spend just under $350 in the area — excluding transportation. While only 24 percent of those dollars are spent on entertainment — admission cost would be included in that number — the other 75 percent is spent on meals and lodging.

“While I don’t have specific dollar amounts for Truman library visitor spending, it stands to reason that the majority of our visitors are coming to Independence to experience the story of Harry S. Truman, our 33rd president. Last year, the site reported approximately 300,000 visitors. If the Truman sites account for 49 percent of the visitors to our sites (147,000) and the average visitor parties to Independence spend just under $350 (per the visitor impact study), it would be an economic impact of $51,450,000 (this does not include ticket revenues or sales in the gift shops).”

“But we do co-partner with the city of West Branch on two events — Hoover’s Hometown Days, which is always the first week of August, and Christmas Past, which is always the first weekend of December,”  said Schwartz. “We coordinate with the city with events and public offerings; we also partner in that way with the National Parks Service. We are located in the middle of a national park with the Herbert Hoover National Historic Site.”

The Herbert Hoover National Historic Site has an annual visitation between 140,000 to 150,000 visitors. In 2017, these visitors contributed an estimated $8.3 million to the local economy. The Herbert Hoover Presidential Library and Museum is one of 14 presidential libraries and museums operated by the National Archives and Records Administration and had a total visitation in fiscal year 2018 — Oct. 1, 2017, though Sept. 30, 2018 — of 56,590, which included visitors to the museum, library researchers and on-and off-site public programs. Unlike NPS, NARA does not calculate economic impact.

Some of those public programs include two concerts in the village green on Memorial Day and the Fourth of July, which are also crowd pleasers, said Schwartz, who added that the music events draw around 500 audience members.

“We also have an event called ‘Kites over Hoover Park,’ which is a family-friendly event where we provide free kites to use. People can bring their own kites and there is a kite vendor. The kite event draws roughly anywhere from 1,200 to 1,500 people,” Schwartz said. “Those occasions are free to the public and our support foundation helps us to defray the expenses. Porta-Potties are provided for both handicap- accessible and non-handicapped visitors and there is law enforcement 24/7.”

In September, around Constitution Day, a naturalization ceremony is held in partnership with the federal courts, typically bringing between 70-85 people.

Hoover’s birthplace home is also located within the park and so is the Quaker meeting house he attended. Both he and his wife are buried on-site.

“The city obtains revenues from these events through the purchase of restaurant meals and gas through the regular state and city tax structure associated with purchasing gas, so that is the revenue generator from what we do have for the city,” noted Schwartz. “The national park has no admission fee; the museum, operated by the National Archives and Records Administration, has a modest admission fee. All school groups, however, can visit free of charge.”

“Abilene is a tourist community,” said Jane Roller, director of Abilene Convention and Visitors Bureau, which is a department of the city, funded through a transient guest tax. “While our town is only 6,500 in population, the Eisenhower Presidential Library, Museum and Boyhood Home visitation creates opportunities for economic prosperity. Restaurants, hotels, gas stations and retail businesses benefit from additional customers and sales. Abilene, Dickinson County and the state of Kansas benefit from additional sales tax collections. Room sales alone totaled more than $2.5 million in 2018.”

Abilene is the cowtown that raised the 34th president. Located at the end of the Chisholm Trail, Abilene is proud of its cowtown history as well as being the hometown of a five-star general and president, Dwight D. Eisenhower.

“The city of Abilene’s municipal building is named after Eisenhower and downtown visitors will find Little Ike Park, which celebrates young Eisenhower,” said Roller. “Kansas Highway 15/Buckeye Avenue also celebrates Eisenhower through special sign toppers,  noting it as Eisenhower Memorial Highway. Nonprofits in the community work together to host the Eisenhower Marathon, a Boston Marathon-qualifying race. The site is also host to the yearly Symphony at Sunset D-Day Commemoration.”

The Eisenhower Presidential Library is not only the second most-researched presidential library, it is part of the city’s community. The library’s courtyard is the site of many community events, including the Eisenhower Legacy Gala, Abilene Chamber of Commerce annual banquet and other ceremonious events.

“Attendance at the Eisenhower Presidential Library, Museum and Boyhood Home is more than 200,000 each year,” said Roller. Across from his home is the Place of Meditation where President Eisenhower is buried.

Because of the Eisenhower Presidential Library and the community’s partnership, Abilene boasts several accolades, including:

Other businesses and attractions also capitalize on the Eisenhower connection. The Eisenhower Presidential Library is the hub of the “5-Star Museum District,” which is comprised of five museums all within walking distance of the library. Local restaurants also tap into the city’s presidential connection, with Mr. K’s Farmhouse — formerly Lena’s — attracting visitors to view its Ike memorabilia and check out Eisenhower’s favorite restaurant. There is also Ike’s Place, which features Eisenhower photos on the walls.

The Eisenhower Presidential Museum is undergoing a complete renovation, said Rolling, who added that other museums that have undergone renovations experienced a significant spike in attendance in the first 18-24 months post-renovation.

“This project uniquely positions Abilene businesses and other attractions to leverage the additional visitation in their own operations,” said Rolling. “After all, what business wouldn’t want access to additional customers?”

The favorable ties between cities and their famous presidential residents often go both ways. Eisenhower, on June 22, 1945, made a memorable declaration: “The proudest thing I can claim is that I am from Abilene.”