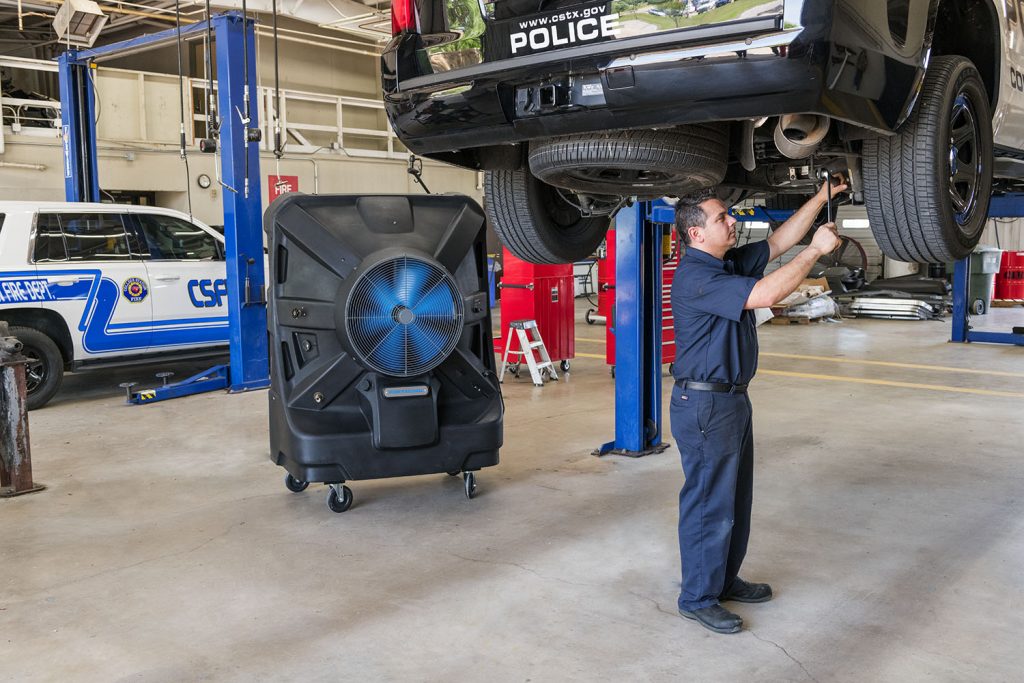 Despite the Texas heat, this College Station mechanic remains comfortable with the Portacool Jetstream. (Photo provided)

Located just under two hours northwest of Houston in the heart of the Brazos Valley is College Station, a college town with a population of 112,141. College Station is home to the main campus of Texas A&M University and is a good depiction of all things Texas — from trucks to tailgating to southern heat. Mechanics at the city of College Station Fleet Services consider themselves to be well acquainted with the extreme temperatures.

“When I feel a bead of sweat on my head, it’s time to turn the Portacool evaporative cooler on,” said Kirk Macik, truck technician and 16-year veteran of the College Station Fleet Services shop. At the shop, mechanics are tasked with servicing more than 400 pieces of the city’s equipment in their bays ranging from larger vehicles like fire engines and dump trucks to police cars and SUVs, all the way down to the city lawn mowers. Instead of specializing in one type of vehicle or machinery, each mechanic must work on every type of equipment.

Housed in a 10,000-plus-square-foot metal building with 14 bay doors that reach 20 feet high, the open environment of the Fleet Services shop makes cooling employees a challenge. While a breeze from the open doors can be nice, it’s very inconsistent thanks to an expansion on the complex that resulted in another large building right behind theirs that consequently blocked the air flow.

The veterans and newbies alike agree that working in the facility can be downright unbearable in the summer. Temperatures can often run 90° F to well over 100° for six months out of the year — a hot, uncomfortable environment that can make focusing very difficult. That is until they discovered Portacool portable evaporative coolers.

They “dipped their toes” in the portable evaporative cooler world by renting a couple of Portacool products from a distributor. After they actually felt how much they helped keep employees cool, they knew they had to buy a few for themselves. The shop’s two Portacool Jetstream 240s, which they’ve had for going on two years, are used to spot cool the mechanics as they work on the range of vehicles and equipment that come through the shop. This is important given that the large trucks — like the fire engines — almost function as walls since they stand 14 feet high and block any air flow, which adds to the heat impact. The mechanics note in the summer when it gets really hot, they put the evaporative coolers directly in their tight working spaces to get max cooling. In fact, Kirk adds they are thankful they don’t have to leave them hooked up to a hose because of the built-in reservoirs, as they move the coolers around quite a lot.

The mechanics have declared their Portacool Jetstreams are an everyday necessity for their work. Kirk said he typically notices cooler temperatures in the double digits. As a result, on top of keeping the employees safe, he’s even noticed an increase in productivity. After all, when the mechanics work in good conditions it’s easier for them to keep the city of College Station’s vehicles and equipment in good condition, too. 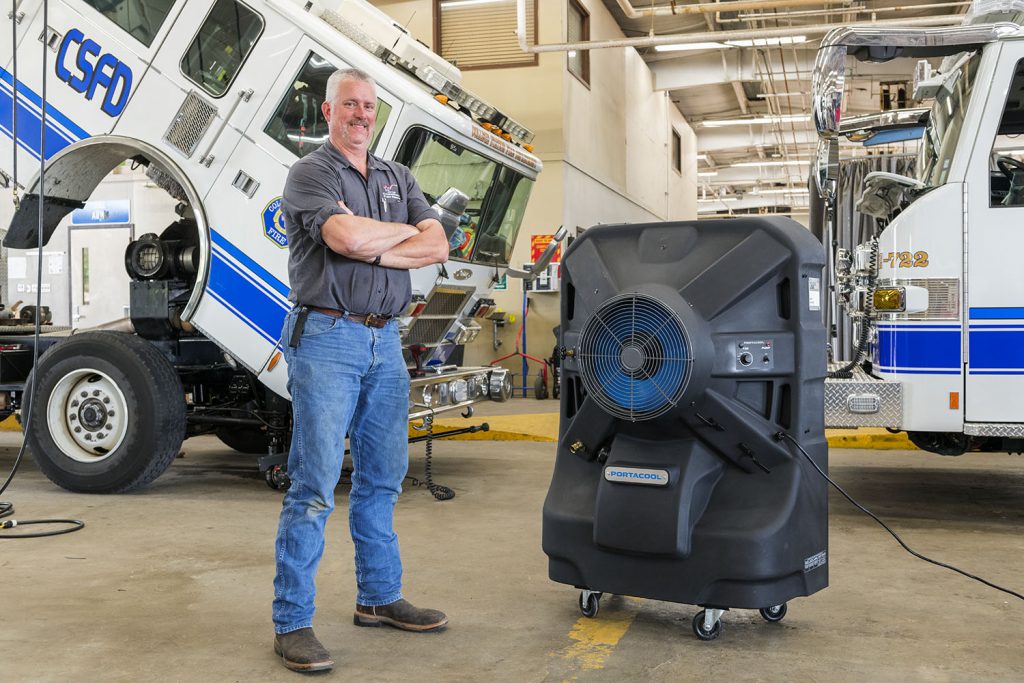