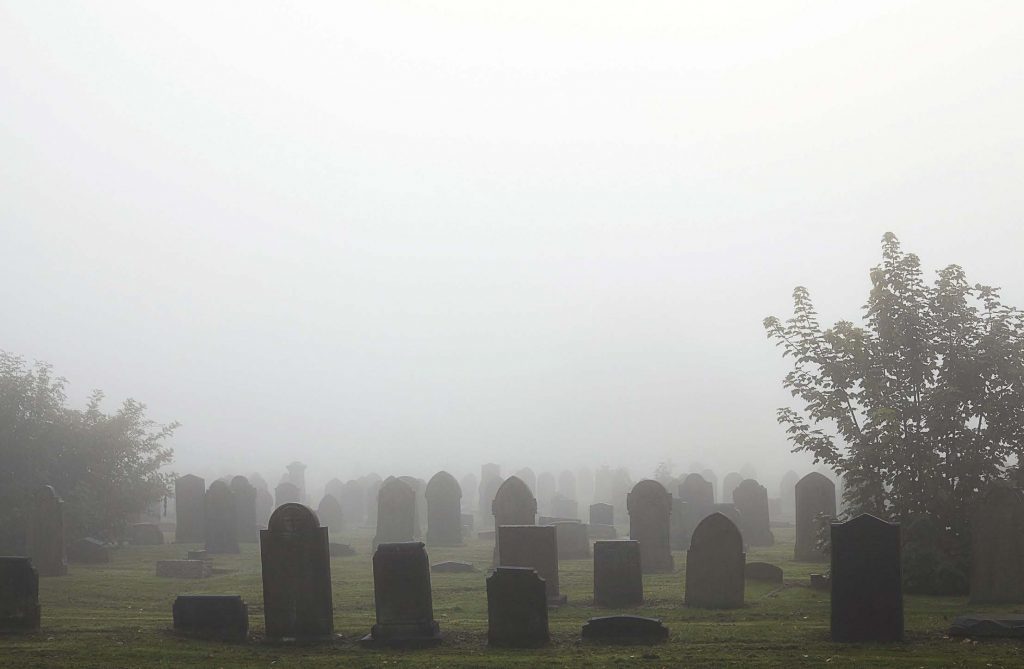 Most paranormal encounters appear to happen in old buildings, homes and locations like cemeteries. Of course, sometimes people are also “haunted.” Thankfully, access to holy water has become easier with online shopping. (Shutterstock.com)

Police officers already have it tough when handling high stress situations on a regular basis, but what about unexplainable situations they aren’t trained for? Are they really prepared for ghosts whose issues with authority run so deep that they’ll haunt the police station? There’s absolutely no way to be prepared to bust up a satanic ritual with a completed altar, deal with a whole town haunting or strange clown sightings.

Maybe these kinds of things get better with time.

It’s instinct to doubt a call about a haunting — in a professional manner, of course — but dispatched officers always approach the situation seriously. Officers realize that even if they don’t personally believe or haven’t experienced the paranormal firsthand, it doesn’t make the caller’s experience any less real — though every avenue should be considered, such as a history of mental illness and drug or alcohol usage. Of course, sometimes a “haunting” has turned out to be a stranger sneaking into the attic or living in the walls.

When it comes to ghosts and hauntings, everybody jumps on the bandwagon to debate whether it’s real or fake. Police officers, who are primarily pragmatic and rational individuals, have their share of unexplainable stories. Even those willing to tell their experiences still think of themselves as skeptics.

Shepherdstown, W.Va., is where everyone has a ghost story. Every day the policestation receives phone calls from residents and from places across the world seeking advice. Shepherdstown is considered the most haunted town of America — so much so that they have paranormal investigators’ numbers ready to give to those needing them.

“Anytime you get a 911 call for a ghost, that’s going to be kind of wacky. I’ve been doing this job for 37 years and I’ve gotten a great amount of wacky calls,” said Shepherdstown Police Chief Mike King. “A lot of people are looking for confirmation that there’s something that’s going on and that they’re not crazy. Unfortunately, officers are taught their whole career that it’s not what you believe, it’s what you can prove. 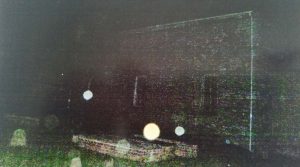 Shepherdstown, W.Va., has attracted many paranormal enthusiasts who, with permission from Chief of Police Mike King, have visited places around the town. After receiving photos of their findings, King has learned that while most orbs are brushed off as specks of dust, those that are golden colored and perfectly round are said to mean something by paranormal investigators. (Photo provided) 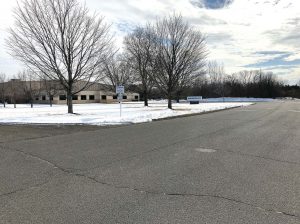 After the old Air Force base hospital in Chicopee, Mass., was torn down, three new businesses were built in its place. They have not seen any satanic rituals return to their properties. (Photo provided)

“Our whole purpose is that we’re public servants. Tell me what’s going on and I’ll try to find a reason. If you get repeated calls from the same place, there’s an issue.

Everybody’s going to say they don’t believe in that stuff but I ask, ‘Have you ever seen a million dollars?’ Probably not, but you know it exists. Just because you don’t believe it doesn’t mean it can’t be happening.”

They’ve received many phone calls from someone thinking their house was broken into. The caller would say they heard footsteps, saw lights turning on, could see shadows moving under the door and hear someone talking, but officers arriving at the house would find it to be locked tight with no evidence of forced entry.

Considering himself a skeptic, King has recalled his own encounters when working with the K-9 unit. A large old school building was being investigated, each floor having been covered when King heard the distinct sound of someone — or something — running on the second floor. Looking to his dog, which was also following the sound with perked ears, he realized it wasn’t in his head.

With the overwhelming unexplainable encounters and paranormal investigators coming in, Shepherdstown eventually had its own TV show to document ghostly reports.

The show opened the doorway for other departments seeking help. King received many thanks for bringing awareness to what so many officers face but don’t come forward to say.

Ghostly encounters don’t end with residents. The old police station in Homestead, Pa., experienced its own strange happenings for several years. Officers who had paranormal experiences — such as a typewriter typing by itself, doors opening and closing, footsteps when officers were alone and things locking and unlocking on their own — brought in a paranormal society to investigate. The chief of police did his own investigation, discovering consistency and similarities between everyone’s stories.

Eventually the department moved to a new police station where officers wouldn’t have to deal with feeling watched all the time, though the chief joked about spirits tagging along if they wanted since they weren’t hurting anyone. 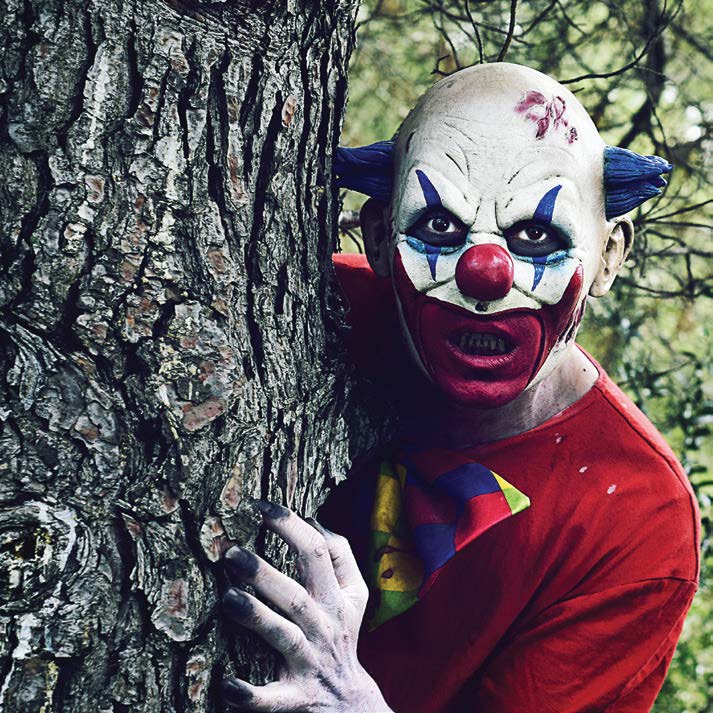 After the 2017, release of the movie “It,” there was concern that another clown epidemic would follow, but it has yet to happen. Hopefully, the creepy clown sightings will be a thing of the past. (Shutterstock.com)

Why do people do that?

Sometimes the most abnormal encounters aren’t with ghosts, but with other people just being weird. It can be laughed off with a cheeky comment at times, just as the Greenville Police Department in South Carolina did about not shooting bigfoot after a recent sighting as “you’ll most likely be wounding a fun-loving and well-intentioned person sweating in a gorilla costume.” Other times the situation becomes a little too weird to laugh at until years later.

About 30 years ago in Chicopee, Mass., an old condemned Air Force base hospital sat, minding its own business. Fresh on the job and a part-time officer at the time, CPD’s Public Information Officer Michael Wilk recalled visiting the abandoned site.

“It was the spookiest place, like a horror movie. You walk in, see the decrepit walls, old furniture and operating tables and immediately think, ‘I’m in a horror movie and I’m going to die.’” Wilk laughed. “The day I went in to check things out, there wasn’t much to see. We got called (again), but when we went back, we realized things had been rearranged and doors were shut that had been open before.

“There was an altar set up and cut off heads of pigeons lined the windows and room. There were satanic drawings. It was freaky. At the time, experts were brought in to look it over to see if it was just some kids messing around or if it was the real deal. They said it was legitimate satanic worship.”

Wilk commented that his senses had become more heightened, even though it wasn’t a particular situation he had been trained for. He reverted back to the basics of his training in maintaining awareness of his surroundings. Nobody was ever found. The city installed a fence and CPD heavily patrolled the area until it was demolished. Chicopee hasn’t run into any other satanic situations since.

Here are some examples towns and cities have found effective when handling the paranormal:

The clown epidemic in 2016, when there were calls of creepy clown lurking in woods, walking the streets late at night or sitting on other people’s front porches, was a nationwide issue and showcased a collection of individuals’ horrible senses of humor. It put multiple communities on edge, even causing an 11-year-old girl in Georgia to carry a knife out of fear of a petrifying clown chasing or screaming at her. Hardly any clowns were caught.

It was no laughing matter in Glasgow, Ky., where, like other police departments, its department was handling the complaints in accordance to city ordinances and states laws. Glasgow’s ordinances specifically prohibit people older than 12 from dressing in identity-concealing costumes, and those doing so could be fined $100. The clown sightings eventually stopped, but they are still remembered as a weird interlude of 2016.

When in doubt, refer to basic training and everything will work
out. Hopefully.

Urban Legends are common in local communities and often attract visitors to a physical infrastructure linked to the legend, especially during times like Halloween when people or paranormal enthusiasts want to visit haunted places the most. In Fairfax County, Va., the Bunny Man legend prevails and brings in a lot of pedestrian traffic to the Colchester Overpass, commonly referred to as “Bunny Man Bridge.” Local authorities have been controlling pedestrian traffic that increases around Halloween to avoid any accidents where non-locals can be unaware of the active railroad on the overpass.