Joe York, street department director of Franklin, Tenn., has seen the world, thanks to Uncle Sam.

While serving in the armed forces after high school graduation, York’s tour of duty was aboard the destroyer USS Sarsfield where he saw several countries in South America and the Middle East. His ship was also deployed to Vietnam in 1972, assisting in the war effort.

“When I got out of high school, I worked on the family farm until I joined the Navy in 1968,” said York, who received an honorable discharge as Navy seaman and boatswain mate third class.

“My duties included maintaining the decks, and I was responsible for bridge watch and lookout and often steering the ship. We were also in charge of replenishing, which included refueling, food, ammunition and supplies at sea. I spent four active and two reserve years with the Navy.”

After he left the armed forces, York worked for a construction company, which meant he worked many hours, days, nights and weekends.

“The city of Franklin posted a job for a road inspector,” said York, adding that his two children — Lindsey and Jason — were very young at the time.

“Obviously, I did not get to spend much time with them, and even though I loved construction work, I knew that I’d be able to spend more time with my family if I got accepted by the city. So I applied and was offered the job and came to work for the city as first road inspector in October 1994.”

In 1999 the former street director took an early retirement and York was placed in that position as interim for six months, and after that, he was offered the job permanently when it was approved by the Board of Mayor and Aldermen.

Some of the significant changes he has seen over the years in technology included various implementations in York’s department.

“In 1994 inspections were written in field books, our office had two computers and our former street director had the only cellphone in the department, and it was as big as a brick,” recalled York, adding that keeping up with new technology was the most challenging part of his job.

“Today, all of our inspectors and office staff have their own computers, and inspections are input into a computer program called INFOR so that every department in the city can access the information should they need it.”

By the same token, Franklin — which in 2016 had a population of 74,794 — has changed, mainly in population growth and more traffic, according to York.

What about winter — does Franklin get any snow?

Franklin, Tenn., has grown exponentially, and the street department plans to move from a reactive model of yearly maintenance to a completely pro-active model to better meet growing needs. (Photo provided) 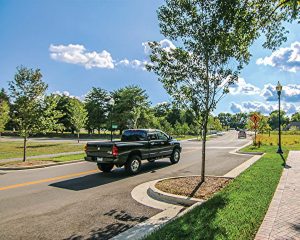 Vehicles travel down one of Franklin’s tree-lined streets. (Photo provided)

“We do occasionally encounter snow,” said York, “and we presently have the ability to place salt brine on the streets in advance of potential snow or ice conditions. We have seven salt trucks equipped with salt spreaders and plows to apply salt when necessary. Franklin also has two storage facilities on opposite sides of the city, which hold 2,200 tons of salt this winter.”

York, who belongs to the American Public Works Association, was born and raised on a Peytonsville, Tenn., farm and still lives there, renting the land to his neighbor who cuts hay for his cows. Years ago, Joe and his brother built a small two-bedroom log cabin home on the farm where he now lives.

“My son and daughter helped stain and seal all of the wood in the home,” said York.

When asked earlier if he had any grandchildren, York said none yet, but that he was the owner of many “grand-dogs” — Jax, Bruce, Lucy, Layla and King.

“Growing up on the farm we always had dogs,” said York. “The five dogs stay inside when I’m not home, but they love to go outside and run through the fields and chase squirrels and deer. They sleep inside with me, and I enjoy hanging out with my kids, walking with my five dogs and feeding corn to the deer.”

An especially tough challenge York has encountered on the job was when his department moved three years ago from the street department facility on Southeast Parkway to the new public works facility on Lumber Drive.

“There were a lot of adjustments that had to be made by both departments as we combined our workspaces,” said York. “We resolved the issues then by learning each other’s abilities and working together.

“Our city has grown exponentially in the last decade, and our department has at times struggled to keep up with the need for our services. I would like to see our department move from a reactive model of yearly maintenance to a completely pro-active model.”

It’s always nice when his team receives compliments from the community for the services they provide, said York, and that reassures him they are doing a good job.

Consequently, York expects challenges every day and is prepared to overcome them by always including his staff in the decision-making process.

“Joe is the consummate professional, and it permeates throughout his department from top to bottom accompanied by his constant smile,” said Ken Moore, mayor of Franklin. “There are a lot of Joe York stories, but one of my favorites had to do with some damage left by a contractor to a citizen’s mailbox. Getting the contractor to return would have taken weeks possibly. Instead of waiting, Joe’s team went out immediately and fixed the issue that day. Actions such as this reflect the positive leadership in his department and the can-do attitude.”

His assistant street director, who had been with the city for 21 years, had lost his beloved dog, a Labrador retriever, some years ago, recalled York.

“He was looking for another Lab to replace his pet and found a puppy he really liked but didn’t want to pay what they were asking,” said York.

“Our street department family found out and raised the money for the puppy and surprised him that Christmas with his puppy. This man, who is usually not very emotional, was overwhelmed with joy when he saw that puppy in his office when he came into work that morning. He named his new puppy Sadie and she is still one of his best buddies today!”

York, who lists the Bible as the book that has had the greatest impact on him, also named the two things he could not live without: “Friendships and love.”