Light pollution is a growing problem that not only impacts circadian rhythms of wildlife and humans, but also eats up energy and funds. It’s no secret that LED bulbs last longer, cut down energy costs and are overall more efficient, but more municipalities have waited to implement smart lighting on the streets — the biggest energy users in many towns and cities. 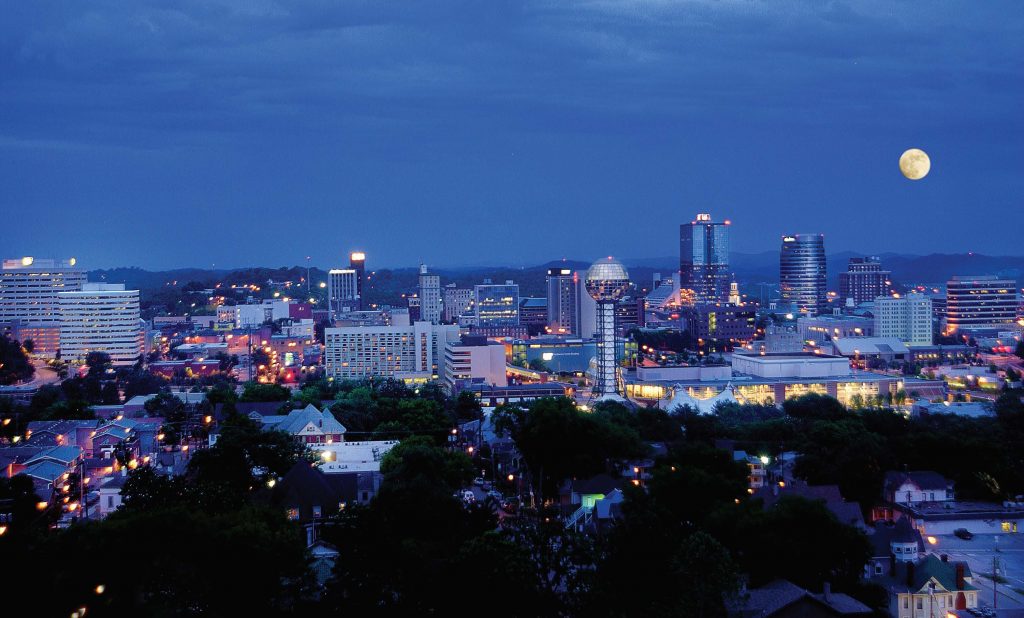 A night view of the city of Knoxville. Knoxville tries to closely follow the standards recommended by the International Dark-Sky Association. (Photo provided)

Dark skies aren’t a primary concern for cities, but some are striving to change that as a lack of darkness affects human and environmental wellness. Streetlights are the first to be demoed to see how it impacts residents, and if there are changes to be made, only a few being switched before a citywide installation. When LED bulbs first appeared, a harsh blue component was present in a 5,000-watt bulb, having a harsh impact on human eyes, melatonin levels and wildlife. Now that the industry has developed more, municipalities are making moves on softer LED bulbs from 2,700 to 3,000 watts.

In Knoxville, Tenn., the plan for retrofitted lights is just underway. Streetlights became a priority in the energy usage and sustainability plan a decade ago after the city realized they are the biggest energy consumer, taking about 40 percent of electricity consumption.

“The LED industry has really evolved. Costs dropped, technology improved and warranty periods were extended to 10 years,” explained Erin Gill, director of the office of sustainability in Knoxville. “We’re spending about $4 million on energy and operations. We expect to save $2 million. In terms of the environment, we have a city goal to reduce greenhouse gas emissions by 20 percent by 2020, and (it) is predicted to push us past that goal.”

Cutting down on the amount of streetlights has been deemed unnecessary by residents and a few government officials as they believe more lighting prevents crime. The International Dark-Sky Association, however, states on its website, “A dark sky does not necessarily mean a dark ground. Smart lighting that directs light where it is needed creates a balance between safety and starlight.”

According to various studies, streetlights don’t prevent the happenings of crimes and accidents but actually increase crimes as targeted people and properties are easier to see.

North Coventry Township, Pa., used a grant to upgrade streetlights — a project that’s been on its radar for some time. Under the guidance of Stan Stubbe, president of the Pennsylvania Outdoor Lighting Council and volunteered resident of the township, they waited out the LED industry for warmer colors despite complaints calling for replaced lights. Since the conversion, there have been no complaints from citizens.

“We wanted to change our lights from the original mercury vapor lights to LED for the savings when they first came out,” said Township Manager Kevin Hennessey. “In talking with Stan over the years, we decided not to. He said they’re a harsh bright blue and that we should wait to see how they develop in the industry. It has been well worth the wait for us.”

“The American Medical Association said that the blue light at night disrupts circadian rhythms and humans’ health,” added Stubbe. “We didn’t want to be in a position to encourage that sort of problem. By waiting sources became available and I felt more confident in converting to LED.”

The main benefits of the switch to smart lighting are the savings in energy consumption, both in rates and costs, as well as environmental impacts in terms of light pollution, resulting in a win-win situation. Planning the execution of the switch is more complex when it comes to deciding how and when to do it as well as who should be consulted.

“There are a couple different aspects on how to design to maximize the benefits,” said Gill. “We made sure this was a technology to implement in a city of our size, and there was quite a lot of work we did with our local utility provider. We talked to sustainability directors and other city staff across the nation to know the good, bad and ugly. We looked at what we could learn from them and build upon getting that institutional knowledge. We took every opportunity to hear from a city that had done this and looked at its challenges to try to get ahead of that.”

While side glow could pose as a problem for some places, it’s written within the township’s ordinances for all lights to be aimed downward and fully shielded.

“As far as power consumption, we’ll be applying to the Philadelphia Electric Company for additional rebates for fixtures since they’ll be reducing energy,” Hennessey said. “I’m extremely glad we have Stan and listened to his advice. I would strongly recommend any municipality that’s looking to make changes seek out an expert who has a dark-sky background. You need a lighting consultant who will steer you in the right direction.”

Fitting smart lights isn’t exactly a one-size-fits-all scenario as softer lights would line residential streets and slightly brighter lights would be place at intersections. Finding to proper wattage, tilt angle and color is what the township had to combine in order to reach the perfect lighting, which hasn’t faced any complaints. The future appears to be heading towards everyone eventually making the switch, but it’s important to pick the right fixtures for the city.

“Our roads are evenly lighted, we’ve had fewer outages than before and we’re saving money. That’s an unbeatable combination of advantages. We might consider including dim-ability in LEDs in the future,” reflected Stubbe. “Municipalities need to do their homework. You shouldn’t rush right into it but give consideration to the details of the impact on drivers, residents and the community’s budget.” 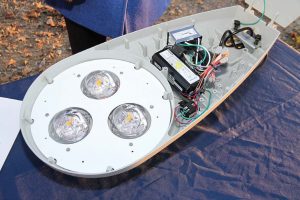 LED Cobra Heads were installed in Knoxville and use less energy to create a clean white light than the high-pressure sodium lights. (Photo provided) 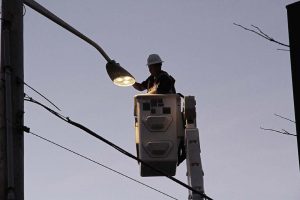 Various studies, from 1997 to 2015, with findings that well-lit places don’t prevent crime:
• The 1997 National Institute of Justice study concluded that it isn’t likely that improved lighting prevents crime. https://www.ncjrs.gov/works/
• A study in England and Wales, which was published in 2015, found that lighting had no effect on road traffic collisions and crime. http://jech.bmj.com/content/early/2015/07/08/jech-2015-206012
• The Chicago Alley Lighting Project found that brightly lit alleys experienced increased crime. http://www.darksky.org/wp-content/uploads/2014/09/Chicago-Alley-Lighting-Project.pdf