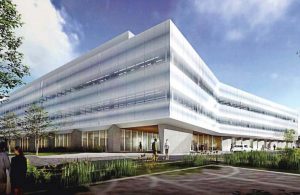 Pfizer and a development partner will construct a new $200 million research campus in Chesterfield Village at the corner of Olive and Chesterfield Parkway West, adding 80 jobs for a total of 625 employees. (Photo provided)

Top Golf announced its plans to take over the Hardee’s Iceplex in the spring of 2017 to construct their recreational golf facility. It is just one of the businesses Chesterfield has attracted with its well-planned community, skilled workforce and location. (Photo provided) 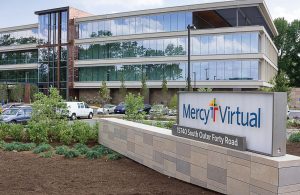 Mercy’s Virtual Care Center provides telehealth services and is a part of the Mercy Hospital network, which is a significant employer in Chesterfield, Mo. (Photo provided)

Chesterfield, Mo., may be a small city, but what it lacks for in population it makes up for in economic development and growth.

Chesterfield is located about 25 minutes west of downtown St. Louis, along the Interstate 64/U.S. Highway 40 corridor. Th e city was formed in 1988 and has grown to almost 48,000 residents today. With that population growth comes a need for facilities in which people can live, work and play.

Libbey Tucker, Chesterfield’s assistant city administrator, said the city has seen steady economic growth in the past three or four years. The retail sector, in particular, has ballooned. According to Tucker, the population’s high median income of $92,571 and average consumer spending of $1.1 million within a 3-mile radius of city-center make Chesterfield attractive for retailers.

If past success is indicative of future growth, retailers are in good shape. The Chesterfield Valley, located in the city’s western corridor, adjacent to I-64, is filled with retail, office, light industrial and warehouse facilities in addition to hotels. Businesses in the Valley comprise 44 percent of licensed businesses within Chesterfield, according to data supplied by the city. The Valley is home to Spirit of St. Louis Airport, located on 1,500 acres and home to 150 different businesses, employing an estimated 4,000 people. Chesterfield Commons, known as the longest retail center in the country, contains more than 2 million square feet of retail space.

With retail activity comes revenue in the form of sales tax. Businesses in the Valley generate $7.4 million in sales tax for the Parks Sales Tax Fund and Capital Improvement Fund for the city of Chesterfield and an estimated additional $2 million in utility taxes and associated fees, according to that same data. Additionally, the Valley generates $8 million in sales tax that goes in the county’s sales tax pool that is distributed to cities based on their population. Chesterfield received approximately 6.5 percent ($520,000) of that $8 million in 2016. Another $15.1 million and $33.8 million is generated and distributed directly to Saint Louis County and the state of Missouri, respectively.

Of course, this success is not in a vacuum. Chesterfield’s activity is due to a perfect storm of sorts.

“Our growth has a lot to do with location,” she said. “We are located along the highway, which means easy access for shoppers and workers to get on and off the highway,” she said.

Speaking of access, the city has also made a point to serve young families and older residents alike through its parks and recreation programming. For example, Chesterfield Amphitheater in Central Park holds 4,000 people. They host outdoor concerts throughout the summer, which Tucker said are consistently well attended. Another event, the annual Taste of St. Louis, draws a wide audience and has put them on the map. Known as “The Ultimate Food Experience,” it’s a three-day festival that offers foodies from around the region the opportunity to sample delicious food in a wide array of culinary delights from the region’s finest restaurants, along with live music.

Entertainment options are a proverbial feather in the city’s cap, but it’s the jobs that keep residents there. Fortunately for employers, Tucker said “it’s easy to find quality workers,” because the population tends to be highly educated. She added that Chesterfield is home to several tech firms, both emerging and established.

The healthcare business is exploding everywhere, and Chesterfield is no exception. St. Luke’s and Mercy Hospital are significant employers in the area. Mercy’s Virtual Care Center provides telehealth services. The VCC is the command center for the nation’s largest electronic intensive care unit and other telehealth services, including telestroke, Nurse OnCall and physician teleconsults. Other plans on this site include expansion and consolidation of Mercy’s office headquarters and an outpatient center.

The city is also bullish on a few projects in the works. Bunge, a food grain commodities trading company and ingredient maker, announced plans in March to construct a 145,000-square-foot North American headquarters facility along the I-64 corridor. This $48.5 million project will retain 550 jobs in the region and add over 200 jobs in the coming years.

Tucker said another win for the city was the announcement that Pfizer and a development partner will construct a new $200 million research campus in Chesterfield Village at the corner of Olive and Chesterfield Parkway West, adding 80 jobs for a total of 625 employees. Another high point for the city was when Top Golf announced its plans to take over the Hardee’s Iceplex in the spring of 2017 to construct their recreational golf facility.

Other companies have identified Chesterfield as an attractive city for relocation. Solid Gold Pet moved their headquarters from Greenville, S.C., into existing space. The holistic pet food company will have 25 jobs in Chesterfi eld and 50 company-wide, while making a $100,000 investment.

All of this would not be possible without forward-thinking governance. The city and private entities have been responsive in growing alongside the needs of its residents — an example other municipalities can follow.

“Having a well-planned community is important, as is leadership that can see beyond the now and (envision) what might be,” said Tucker.