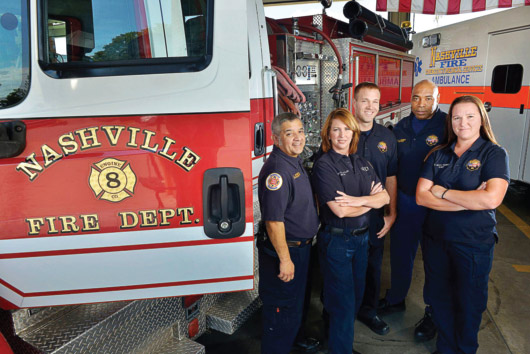 Nashville Fire Department reaches out to the public on various forms of social media including to publicize recruiting efforts. (www.facebook.com/ NashvilleFireDepartment)

Social media is a widely used platform among residents all over the country. Increasingly, businesses and nonprofits are adding to the list of big names who have a social media presence, and municipalities are no exception.

Fire departments and police are able to reach out on various platforms, such as Twitter, Facebook or even Periscope, to relay critical messages. Wildfires in California are breaking news items that travel quickly thanks to the help of social media. The recent flooding of South Carolina saw thousands of people take to social media to stay up-to-date on dangerous areas of the state. Major news stations like Fox, CNN and NBC have used social media to give short updates on these major world events. So how do municipalities rank on the social media chart?

Nashville, Tenn., has a large and prominent presence on social media, including YouTube, Facebook, Twitter and Instagram. Brian Haas, public information officer for the Nashville Fire Department, said he stepped up the social media game in 2014 when he started with the department.

“I quickly discovered that the department had had a Facebook page and a Twitter page since 2011; neither had been used,” wrote Haas. Haas has his own Twitter account, which is noted on the side of the department’s profile. “My first posts to both were on Oct. 8, 2014, and I’ve been trying to use them at least several times a week, if not daily.”

He uses the pages to communicate events, stories and photos that involve Nashville Fire Department. Simply put, he said, “I use Facebook to tell our department’s story.” He has, perhaps, hit the nail on the head with that simplistic idea. Like news, social media has become limited in words and unlimited in photos, implying a clear value for the importance of photographic stories.

He links the two accounts for the department, using one to refer back to the other and vice versa. “I’ll also use Twitter to interact with media and other folks and to tweet out updates on breaking news or ongoing news events,” said Haas. Haas said he is also testing his feet in the waters of Periscope, a live broadcasting channel. He was surprised to see dozens of people interacting with his first small broadcast of a charity event.

However, there must be limits in place on how the social media platforms can be used. “We have a department policy that says you’re only allowed to use social media in connection with the fire department with permission,” said Haas. “We discourage logos and such being used in conjunction with profiles, for example.”

Haas believes this is a policy that “is very much evolving” and notes that it is key in ensuring the department’s image and reputation remain intact. Both Twitter and Facebook pages get a steady flow of interaction from the general public and those working for the department.

Like the Nashville Fire Department, Michigan State police have also found social media to be useful. MSP is active on Facebook, Twitter, YouTube, LinkedIn and WordPress, all of which are managed by the department’s public affairs section. 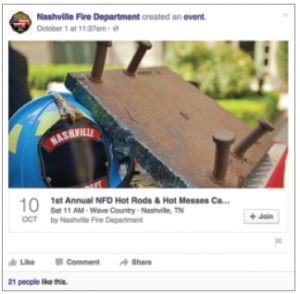 The department created a public event on its Facebook page that allows public members to add themselves to the event and even invite friends to join. (www.facebook.com/NashvilleFireDepartment)

MSP social media is monitored more closely than Nashville Fire Department’s page, and an official statement is shared on the website. “The department’s social media platforms are moderated channels, meaning all comments will be reviewed for appropriate content.” The statement continues, “Please show respect to those you are addressing when submitting comments. Comments that include abusive or vulgar language, spam, hate speech, personal attacks, or similar content will not be posted on this channel. Posts or comments that are political in nature or that advertise a product or service are subject to removal. We reserve the right to determine which comments are acceptable for our social media pages.  We will, however, post and attempt to comment on legitimate questions and concerns related to the mission of the Michigan State Police.”

Sierra Medrano, MSP Public Affairs Section, said the guidelines for social media work in conjunction with all other department rules and regulations.

The way social media has changed over the years is exponential, yet perhaps the most important change has come from the choices each individual makes who utilizes the Facebook, Twitter or Instagram pages.

The Nashville Fire Department posts weekly updates along with photos from around the community, including the occasional pet rescue. Local businesses from Nashville use their own Facebook pages to interact with the fire department and commend the great work. By interacting with other businesses, each community profile is effectively getting additional exposure and creating a sense of community.

The city of Charleston, S.C., is extremely active on several Instagram accounts. Aside from sharing photos from all over the city, the Instagram account also utilizes hashtags and keeps community members involved by asking them to share and tag their city photos.

Haas also finds it important to constantly engage the public. “I try my best to always respond to comments on Facebook or Twitter in some way. Sometimes it might just be a retweet or a favorite, other times I’ll make sure to tweet or post something in response,” said Haas. Haas believes it is wise to listen and respond to those public comments, questions and posts to the page.

“Responsiveness is important to me. Engagement is even more important. I don’t want folks to think that our social media platforms are the ‘Voice of God’ speaking to them. I want them to know that we’re speaking with them.”

For municipalities looking to reach out to their communities, members of the sector may need to look no further than a desktop computer or handheld device. The free subscriptions make social media sites an easy sell, but keeping the attention of those involved with the content is one additional challenge to be tackled in the municipal world.

The Municipal: How does the department respond to criticism or negative comments on social media? Are comments deleted or monitored?

Medrano: “Posts or comments that violate our posted social media policy are subject to removal. We reserve the right to determine which comments are acceptable for our social media pages; although it should be noted that very few comments are removed.”