The time involved in putting together an open house for public works or public safety departments can be daunting, not to mention that there are costs associated with such acts of public awareness and goodwill. Is the effort worth it? 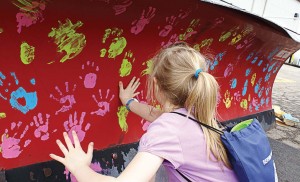 Many hands make light work of painting a snowplow in Lake in the Hills during a public open house last year. (Photo provided) 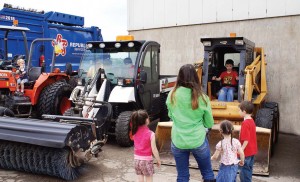 Everyone enjoys being able to get close to the equipment at a village of Lake in the Hills, Ill., open house. (Photo provided)

Some municipalities answer in the affirmative, citing the groundwork it lays for goodwill and understanding. Success depends on several factors, though, not the least of which is working with the resources already at your disposal.

The city of Bloomfield Hills, Mich., has been making a go of its Public Safety Open House for several years. This year it took place in August and brought out 500 of the 4,000 local residents, who were encouraged by fortuitous weather.

The community involvement was the high point for Lt. Jeff Gormley, one of the main planners.

“After 15 minutes there were about 100 people there, and after an hour, over 200. From then on people kept coming and every event was full. Everyone was having a great time and we received praise from many people about the event,” said Gormley.

This year the open house was totally reinvented. Organizers changed the time of year it was held and the direction that it took. In addition to the recreational and educational events, they added a public charity dunk tank that raised $2,074 for Children’s Hospital Foundation of Michigan and included popular personalities like the police chief, police officers, City Manager Jay Cravens and Public Safety Director David Hendrickson. Other activities included cupcake decorating, face painting, balloons, Stan the Magical Fireman, a clown doing washable tattoos, and fire truck and police car displays.

Lt. Gormley headed up the planning for the police department, along with Public Safety Officer Chris Furlong and Hendrickson. The city’s municipal service departments all participated, as did some restaurants and private clubs in a “Taste of Bloomfield.”

Beside the fun activities for families and children there were public education events. A smoke house taught children what to do if their home filled with smoke, and the Law Enforcement Education Program digitally fingerprinted and photographed them.

“We have a new citywide garbage service, and representatives were present at the event, showing off their trucks and explaining their handling of recycling,” said Gormley. City Clerk Amy Burton registered voters, and the local library sponsored activities for children while signing people up for library cards.

It took Gormley and Hendrickson six months to prepare, but Lt. Gormley felt the effort was worthwhile. At future open houses, though, he wants to work out better traffic movement plans and move some events around so they’re easier to find.

“We had a lot of support, from the city manager to the police chief,” he acknowledged. “We kept them posted all along as we made plans, and they let us run with it. The city hall staff was very helpful along the way as well.”

Lake in the Hills, Ill. 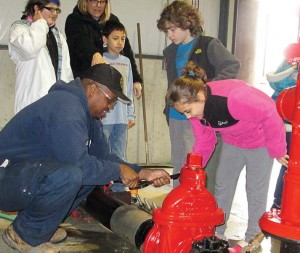 Children seemed to think that the Lake in the Hills, Ill., Public Works Open House was a bucket of fun. (Photo provided)

The namesake department takes the lead in planning for the Lake in the Hills, Ill., Public Works Open House each May, It has been held the week prior to National Public Works Week for more than 14 years and has been expanded over time, but organizers try to keep it an interactive event.

In the village of just over 29,000 residents, about 300 attended this year, climbing in and out of vehicles that were on display so they could see the equipment and discover how it was used. Staff took pictures of visitors inside the vehicles.

“We want people to touch, see and get inside some of the equipment. It’s a hands-on event to help people become more aware of some of the issues we’re facing,” said Director Fred Mullard.

One issue addressed was the emerald ash borer: Staff members explained that it’s not a good idea to move firewood from one region to another. They showed what the insect looked like and the signs that a tree has become infested.

Another event featured a snowplow and a line of various types of mailboxes. A demonstration showed how snowplows are bound to hit mailboxes that hang over into the street.

Other departments had displays, including the police department, community development department and parks and recreation. The fire protection district sometimes brings over equipment as well, said Mullard.

“As another part of the event, the water division had a fire hydrant and section of a main to show what the main and hydrant look like underground. They filled the pipe with water from a garden hose and then cut a slot in it to demonstrate a damaged main. Children could then tighten up a repair clamp to simulate repairing the water main.”

Public works staff walked around during the event and answered questions. The water treatment plant happens to be right next to the public work facility, so tours were conducted that demonstrated how water is produced.

For Mullard the high point of the open houses is “the interest young people take in understanding what we’re doing and getting close to equipment in a safe environment, rather than asking questions when we’re working in the field. Every year we get thanks and congratulations from residents who come, both young and old, and say they learned something new. They appreciate that we make it available for them to see what is going on in their municipal government.”

Lake in the Hills starts working on the open house several months beforehand to get information straightened out. Then staff members go into high gear the week of the event to clean up the equipment and facility. Each year they try to put a new twist on something: This year they added having visitors put painted handprints on a snowplow. Who knows what will come next? 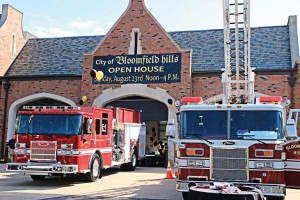 The preschool/youth programming team at Dublin Community Recreation Center, Dublin, Ohio, plans a yearly Touch a Truck event that serves as a convenient way for the city’s public works department to interact with the people it serves. Residents and nonresidents alike have enjoyed the event since 2005.

Currently, it takes place in the back parking lot location of the Dublin South Pool, where there’s enough parking for the large vehicles. While the Recreation Center staff members do the main planning, they always reach out to city departments for participation and support.

“We also reach out to area businesses and central Ohio companies that may have an interesting car or truck that would be fun to include,” she said.

Planning starts three to four months prior; five to six months with a few groups that require more advanced notice. Said Weisenauer, “We communicate a few months prior to the event to secure their support, then follow up on communication a couple times, including email and a confirmation letter.” Touch a Truck is offered in coordination with pool programs so that parking and rest room facilities are available.

“Families can view up close the variety of cars/trucks we have on site. They take photos, sit inside vehicles, honk horns and visit with the people representing the car or truck that was brought. This year the streets department also brought a snowplow that could be painted by those attending. That was a big hit,” she added. Another high point this year was finding something new to bring in, in addition to the all-time-favorite police cars and fire trucks.

“A National Guard Humvee and a DeLorean were two big hits,” said Weisenauer. “Kids love mini-cars from Arrow Radiator because they can climb inside and fit well. Mascots from Chick-fil-A and Sports Ohio were also walking around, and the kids loved engaging with them, too.”

The major change Weisenauer will be looking to next year is the possibility of getting local trolley service to help transport people from the additional parking area, which is at a bit of a distance. The current trolley service is in high demand, but organizers hope to be able to schedule Touch a Truck in such a way as to have it be available to help. 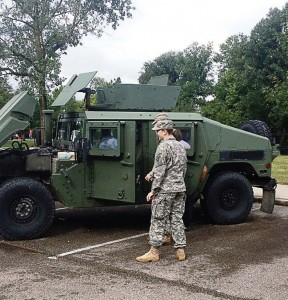 A National Guard Humvee and a DeLorean were new additions to the 2015 Touch a Truck event in Dublin, Ohio, that included public works and public safety vehicles. (Photo provided) 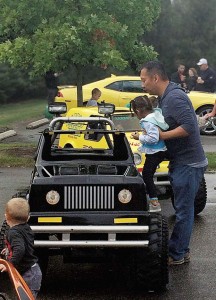 A yearly Touch a Truck event organized by the preschool/youth programming team at Dublin Community Recreation Center in Dublin, Ohio, is as a convenient way for the public works department to educate and interact with local residents. (Photo provided)