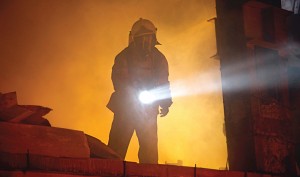 Usually understaffed departments don’t have enough firefighters to form a second, replacement RIT right away when a firefighter goes down, so they should start searching as close as possible to their current location. The faster he is located, the more air supply the team will have to remove him. (Shutterstock photo)

Size ups are used to gather information before a mayday occurs, to help us stay ahead of the game. Conducting a good size up is critical for an understaffed rapid intervention team. Based on the size up, the RIT will chose which tools and equipment to stage and carry. Since a firefighter can only carry so much equipment, the understaffed RIT will be limited in the amount of tools it will be able carry and stage. A good size up will help them select the tools that are most likely to be needed.

The size up also lets us get an idea for the building layout. How many floors are there in the front and rear? What type of construction is the building? What are the common fire spread and collapse concerns with the construction type? This information helps the RIT predict where and what problems they might face and prepare to deal with them. A general layout can be determined so if a mayday is called in the kitchen, the RIT will have an idea of where the kitchen is located and can start their search there, saving time, energy and air.

During the size up consider where you can set up egress. Find ways to get into the building and out of the building on each side. Is anything blocking the opening? Can it be made larger if needed? What tools would be needed to make it larger?

Typically, a fully staffed RIT will split up and multitask when doing the size up. However, this isn’t possible for a short-staffed RIT. They need to accomplish as many tasks as they can at once. One or two firefighters can easily multitask by taking an extension ladder, the irons or a hook, a TIC and, if needed, a saw with them while doing the 360 walk around. Now the crew of one or two can place egress at the rear or on a side of the building, scan the building with the TIC to find possible areas of fire spread, turn off the gas service and other utilities, force and control heavily secured doors on the sides and rear, remove security bars or other obstructions and clear debris from around doors and windows to allow for escape and easier access later on.

Note that forcing and controlling doors does not mean leaving them wide open. It means that if you expect a door is strongly secured that you “soften” it up so if it’s needed later during a mayday, it is much easier to force open with a shoulder or a shove.

Right tools for the job

The size up lets the teams determine what tools will be needed if a mayday occurs. Some tools, like a set of irons, ground ladders, TIC, radios and RIT packs are always needed.

There seems to be a tendency to “overstock” the staging area with tools “just in case,” though. This practice may be okay when there are five or six RIT firefighters. Since two can gather tools while others are doing a size up. But when a RIT is understaffed this presents a problem. The longer the crew is at the street getting additional tools “just in case” and the more trips they make to and from the apparatus is time they are away from the fire and not paying attention to the scene and conditions.

There is only so much equipment that a person is able to carry into the building with him to make a rescue. Use the information collected during the size up to choose the tools that are most likely to be needed for that building and which ones to leave behind. Take saws for example. How many are really needed? What type of saw is really needed? Have you ever seen an RIT firefighter running back and forth to the apparatus with saws in both hands, while he leaves behind other critical tools like the search rope or hooks? If it’s a residential fire, he probably would have been set if the first saw he grabbed was a K-12 or Partner saw that has a multipurpose blade on it, or a chainsaw. Does the RIT really need a chainsaw, vent saw, metal blade saw and concrete saw at a two-story house fire? The multi-purpose blade on a K-12 saw may not cut everything as quick as a dedicated wood or metal blade, but it does cuts both metal and wood. A short-staffed RIT can stage the K-12 or Partner saw with a multipurpose blade that will cut a pad lock on the gate or window bars then turn a window into a door, and then go get other important tools like hooks or search ropes and still be prepared if a mayday is called. Don’t forget about saw-zalls either. They are lightweight, battery-operated and work in smoke conditions. The saw-zall can greatly help an understaffed RIT get started if a mayday is called early on in the operation before all the tools are collected.

Responding to a mayday

First, confirm the mayday. What is the emergency? What trouble are they in? What information does the IC have? Remember, a lost firefighter is someone who does not know where they are, but whom the RIT or IC has communication with and can give information and assist with a rescue. A missing firefighter is just that, a firefighter who’s location and conditions are unknown.

Use an acronym like LUNAR to determine what trouble the firefighter is in and to get an idea of what might be needed to affect the rescue.

L — Last known location. Where do they last remember being, or where does the IC have them assigned as operating last? What’s around them? Can they feel anything that identifies where they are? Is the floor tile or carpet? Tile floors are usually kitchens or bathrooms and carpets are usually living areas.

U — Unit (company). Who are you looking for? If you’re looking for John Smith from Engine10 and you find James Doe from Ladder 12, that means Smith is still missing.

A — Assignment/air. What and where was their assignment? If a firefighter is reported missing and he was assigned to fire attack in the basement, then start by following the hose line into the basement. If the firefighter is lost, how much air does he have left? Do you need an air cart or the RIT pack?

R — Resources/radio. What’s needed for the situation? Was it an interior collapse? Are they reporting they are trapped in a partial collapse and stabilization is needed. Is a hose line needed for protection? Can the down firefighter tell you what is needed to rescue him? The RIT can stage every tool on the apparatus but can still only carry so much with them. Take what you need to make the rescue.

Regarding the radio, are they radio equipped? If the firefighter has a radio, try keying the microphone and listening as you search. If you are close to the firefighter, you may hear feedback on your radio or when calling him on the radio.

Finding the down firefighter

This means the best way into the structure isn’t always going to be the front door. It might be a second floor window or rear door. It depends on factors such as the fire conditions, the location, collapses, last known location of the firefighter and secondary means of egress identified during the size up. Paying attention to radio traffic from the time you are dispatched will help you decide which locations are best to start your search. An understaffed RIT typically does not split into separate teams to search, like a fully staffed RIT. However, by splitting up any RIT can cover a lot more area.

While a fully staffed RIT typically splits into two or three search teams to search different areas at once, an understaffed RIT has to be a little more creative.

If the RIT has four firefighters, they can split into two teams with each team searching from different points towards each other. This is pretty standard and might be good if you have to search the entire basement, but if you are short staffed and are operating for a while on your own, there are other ways to search in teams that might extend your operations.

One option is for an RIT of three or four firefighters to split into two teams, like before, and perform a “leap frog search.” Leap frog searching gets the most out of the time and energy out of the small teams performing the search. When leap frogging the crew splits into two teams. One team starts the search, taking a search rope or tag line with them. The other team of two hold ready to go at the entrance point. The team at the entrance is there and ready to help the first team that’s searching. Th ey might be called to rescue the first crew if they get into trouble, or bring in additional tools or immediately replace the first team if they need to change out SCBA cylinders.

In the last scenario, the first team needs to exit before completing the search and finding the firefighter. They can leave the rope end where they last searched, and exit. The second team follows rope in and begins searching right where the first team ended, not wasting air or energy re-searching an area already covered.

It’s important to point out that the first team’s job isn’t over once they are replaced by the second. The first team replaces their SCBA cylinders and gathers tools then stages, ready to go at the entrance ready to replace the second team when needed. “Leap frog” searches allow for a team of one or two firefighters to be ready to enter and keep rescue efforts going when you do not have the staffing to place a second RIT in service immediately.

Another search option is vent-enter-isolate- search, or VEIS, which is a good search for a two-or three-member RIT to use. Two firefighters begin the search on the lower floor and the single firefighter can perform VEIS on the upper floor. This allows the smaller team to cover both floors simultaneously. VEIS is not something to try without proper training and experience, though, and further training should be conducted if any RIT plan on using VEIS in their operations.