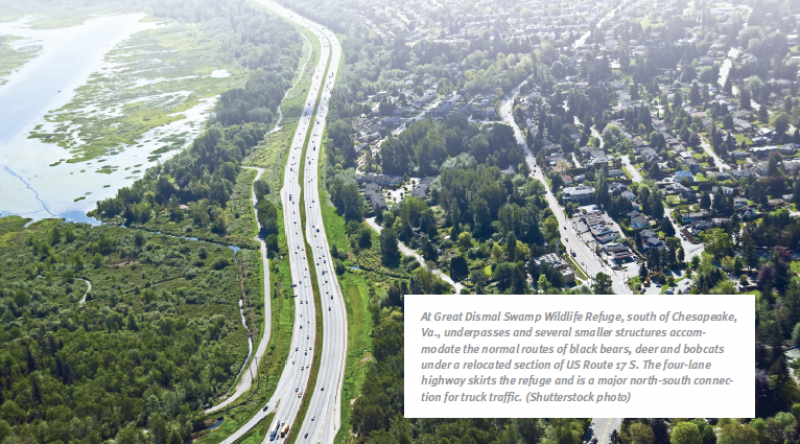 At Great Dismal Swamp Wildlife Refuge, south of Chesapeake, Va., underpasses and several smaller structures accommodate the normal routes of black bears, deer and bobcats under a relocated section of US Route 17 S. The four-lane highway skirts the refuge and is a major north-south connection for truck traffic. (Shutterstock photo)

What makes partnerships work, when they are for improvements in a local area but require the help of different levels of government and different organizations to pull them off ?

This question arose in an article that Jeff Mast, of the U.S. Fish and Wildlife Service, wrote in the National Wildlife Refuge System’s “Refuge Update” in 2013. “Road Culverts Improve Safety and Habitat Connectivity” laid out one particular regional collaboration in the following manner.

“At Great Dismal Swamp National Wildlife Refuge on the Virginia–North Carolina border, in 2005 a multi–agency partnership resulted in two large wildlife underpasses, as well as several small structures, to accommodate the passage of black bears, deer, and bobcats under US Route 17 S., in the City of Chesapeake, Va. Th e four-lane highway skirts the refuge and is a major north-south connection for truck traffic to the ports and commuters. These wildlife thruways are especially important because the refuge is at its biological carrying capacity for bears, and juveniles are likely to establish territory beyond the refuge’s boundary. ‘With a four–lane, divided highway that receives a lot of traffic, it is essential to have safe crossings for the bears to move east from the swamp,’ says Refuge Manager Chris Lowie.”

According to the article, Steve Suder, U.S. Fish and Wildlife Service national transportation program manager, the key is federal, state and local cooperation from the start.

“As we look forward at mitigating the impact of wildlife–vehicle collisions in the vicinity of national wildlife refuges, we must be proactive and collaborate with our partner agencies to achieve the many mutual benefits that result,” it said.

The wildlife corridors, bridging routes wildlife were used to traveling across US Route 17 in Virginia, opened in 2005 after a nearly 12-mile long section of the highway was relocated a short distance west of it’s old path. In the decade before the section’s completion, it had seen 256 crashes and 30 fatalities between wildlife and vehicles. Mary Ann Saunders, assistant to the city manager of the city of Chesapeake, mentioned that she thought it was one of the top ten most dangerous roads in the U.S. Before she came to work in Chesapeake in 1987, she knew that people in the city were working toward a new highway.

“Highlighting safety issues that exist for the local cities helps get these large, important projects underway,” she said.

Congress members and legislators from both states, citizen grassroots groups in the community and members of the business community were all vocal in favor of a new section of road. A turning point may have come in 1999 when back-to-back hurricanes flooded the existing road and closed it for about fi ve days.

The interest of Chesapeake and its city council was in getting the bigger road built, so the key strategic role of the city was to highlight the current problems and bring a sense of urgency toward resolution. However, debate lingered over whether to widen the existing roadway or relocate the alignment on a new location.

In this situation, Virginia Department of Transportation had a major stake in the project and was working on design to widen the existing roadway for many years since it was a state highway. Chesapeake’s involvement began with advocating for both a decision on the roadway’s location and funding. It was the only city involved, along with the county of Camden and elected leaders in northeastern North Carolina. Money for the project came from VDOT.

Chesapeake city represents a very large land area, more than 353 miles square, with US Route 17 being one of two highways linking North Carolina to the region’s job centers. One of Chesapeake’s bigger issues in the replacement of the highway had to do with trying to resolve conflicts between environmental agencies, such as the Army Corps of Engineers, which do permits for wetlands and speak on behalf of wetlands and wildlife, and the North Carolina Department of Transportation that was responsible for planning and construction.

Since 2005, Mary Ann noted, “The relocation of the highway has created an eco-tourism corridor for that part of the city. The primary benefit from the project is motorist safety for those on the road and wildlife around it, and a secondary benefit is the former roadway converted to a multi-purpose trail for people interested in recreation, wildlife and the rich history of the wildlife refuge.” 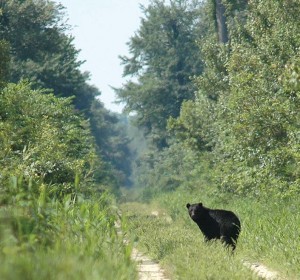 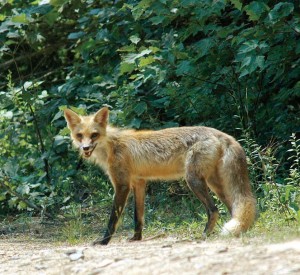 ‘They support us and we support them’

Cindy Lane, deputy wildlife refuge manager for the Great Dismal Swamp National Wildlife Refuge, had the following to say about Chesapeake as a planning partner:

“As far as working with the city of Chesapeake, they’re a dream to work with. We have never had anything but good cooperation and positive relations with them. They support us and we support them. Today, we provided a boat and an operator to conduct a tour at their request. They help us with our events, and we help them with theirs. They take our mission into consideration when they are making plans for development of the US Route 17 corridor. They used us as a selling point of sorts to create their fabulous Dismal Swamp Canal Trail that accommodates horses and bikes and has a canoe/kayak launch. The trail runs along the eastern border of the refuge.”

Lane added some words for local governments interested in partnering with regional organizations on projects. Cities are easier for organizations of broad scope to work with, she said, when they understand the mission of larger agencies and can keep in mind common goals they might share.

When a large project is needed and a city is involved, the city can be most helpful by appointing a consistent contact person — someone who’s accessible, dedicated and sharp; by always thinking of the agency when a project would involve it, and keeping members in the loop; and by inviting the agency’s participation from the early planning stages on.

Final words about the wildlife impact on the partnership came from “Research Report: An Evaluation of the US Route 17 Underpass, in Chesapeake, Va., as a Wildlife Crossing,” available at www.virginiadot.org/vtrc/main/online_reports/pdf/10-r10.pdf and written by Bridget Donaldson and Maynard Schaus. Research from before construction of the bridges identified areas along US Route 17 that were main bear and other wildlife crossings, determined from hair samplings taken from barbed wire in single strings along the highway. Studies of underpasses in Florida showed how too narrow spaces limited wildlife crossings. Another study by Matthew McCollister and Frank Van Manen in 2008 found that in Washington County, N.C., “the three wildlife underpasses that were constructed in 2005 beneath a new section of I-64 monitoring for a year documented 17 black bear crossings and more than 3,000 deer crossings through the three underpasses.”

From the evaluation of the US Route 17 underpass, “A total of 550 crossings were documented over the 29-month monitoring period. [November 2005 to March 2008] This number may be conservative, given the large expanse of wetland and small portion of the southern dry area that could not be captured by the camera range. At least 12 species were photographed in the underpass, some of which are shown [left]. Thirteen black bear crossings were documented, all during the second year following underpass construction. Deer used the underpass the most (representing 30 percent of all crossings), followed by raccoons [left]. A large portion of the photographs were categorized as ‘unknown’; the images in these photographs were recognized as wildlife but the species could not be identified [left]. The great blue heron, great egret, and Canada goose were grouped into a ‘wetland birds’ category; of this grouping, great blue herons were documented the most (8 times), followed by great egrets (5 times) and the Canada goose (1 time). The fox was also grouped into a larger category because it could not always be identified with regard to the species level (i.e., red or gray). Except for black bears, passage frequency for any species did not significantly increase or decrease over the monitoring period.”

The story of the partnership that created the new US Route 17 is one of a local increasing sense of importance being communicated to and shared by the larger wildlife communities and the state transportation agency.