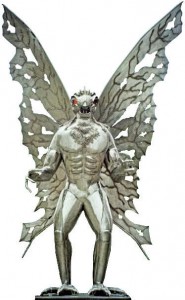 The Mothman creature is described as man-like, with a seven- to 10-foot wingspan and glowing red eyes. A statue in the town depicts him and attendees at the annual Mothman Festival often come dressed as the local legend. (John M Perine / wikimedia.org)

He has been described compositely as a manlike creature with a seven-to-10-foot wingspan and glowing red eyes. The entity later called Mothman supposedly flew low over the treetops and swooped down to attack the roofs of cars inhabited by amorous teenagers.

To the skeptical, the creature was most likely a shitepoke, a large member of the heron family.

In any event, a small cadre of local Mothman devotees, determined to “never let a good legend go to waste,” organized the first Mothman Festival in November 2002. The event took place on Main Street in downtown Point Pleasant and drew a modest crowd of 500. Annual attendance at the growing multi-day festival now tops 4,000 curiosity seekers.

The visitors aren’t just local repeat customers, either, according to Mayor Brian Billings, who cited a litany of out-of-state license plates he has seen during the third weekend in September: Alabama, New York, New Jersey and South Carolina “just for starters.”

Nor is the crowd restricted demographically.

“You’d think it’s the younger ages, but we have more older folks who visit,” said Billings, who served as city council member and clerk-treasurer before becoming mayor in 2009.

Restaurants and stores in Point Pleasant plan their year around the three-day September event, which draws about 4,000 people to the small western West Virginia town. (Photo provided)

Two “Men in Black” visitors to the Mothman Festival in Point Pleasant, W.Va., last year came prepared to eradicate the fictional threat celebrated by the town each September. (Photo provided)

He noted that the town of 4,300 reaps both short- and long-term benefits from the festival.

“While we’re not overflowing with restaurants, the festival is a big time for the food chains.” The local variety, curio and souvenir shop owners “look forward to it. It’s like the Christmas season to them.”

Mothman weekend also brings people to the Battle of Point Pleasant historical site, downtown murals depicting the war scenes, statues of war heroes, and other museums and “other attractions we point them to.”

The city pays for water, trash and police protection during the festival, but “it’s a good investment, as long as we are bringing folks to our community,” said Billings. “We are a proud yet humble historical community, and it’s worth every penny we spend. It is a win-win situation.”