As the old joke goes, some cıtıes have two seasons: winter and pothole repair. 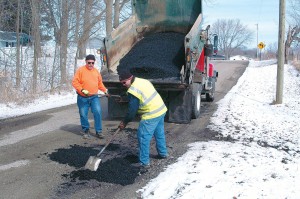 Turning the discovery phase over to the public via pothole reporting systems allows more time for crews to concentrate on repair. (Photo by Keith Knepp)

Each spring, keeping up with the dozens, hundreds or even thousands of miles of asphalt that need repair begins by identifying and prioritizing the potholes. This can be done by “hitting the pavement” in a vehicle and mapping and grading the severity of each one, but that can be a time-consuming and expensive effort — not to mention that new potholes appear seemingly overnight as the spring progresses.

Many counties and municipalities have turned to the people on the front lines of the problem — the residents and drivers who use the roads every day — to help them keep up. While most drivers consider potholes a part of life, some more proactive citizens take it upon themselves to contact someone to let them know the particulars of the problem.

“Pothole hotlines” traditionally take one of two forms: online or telephone. In some cases, both notification systems have been utilized. However, with changing technology has come new ways to report a problem. Some places, such as the city of Portland, Ore., have begun to offer the option of using a smartphone app. The application asks users to take a photograph of the off ending pothole and include contact information for the reporter. Th e app uses GPS technology to pinpoint the location of the problem, which is bundled with the photograph and sent to the Portland Bureau of Transportation.

Taking the reporting a step further, the city of Boston has partnered to develop a smartphone app called Street Bump, which can be set up to automatically sense and report a problem to the city using the phone’s motion detector as soon as a road disturbance is sensed. Using a system of algorithms, the phone’s GPS takes into account and filters out known road hazards, such as manhole covers and speed bumps, before reporting an unknown issue to a central server.

“What this technology allows us to do … creates a new way for people to donate their data in solving public-good challenges,” said Nigel Jacob, co-chairman of the Boston mayor’s Office of New Urban Mechanics, which manages the project.

Other places have partnered with broader websites, such as SeeClickFix.com, to allow their residents to pinpoint problems within the city limits. Some locales have utilized Facebook, Twitter and other social media sites to allow people to notify them of streets in need of repair by posting photos or locations. The same social media platforms can be used to notify motorists of particularly bad problems or ongoing pothole repair areas that drivers should avoid.

Th e most typical way of reporting potholes is still the telephone or a form filled out on the Internet, usually found on the website of the county, city or town that governs the repair of the street or roadway in question. The report asks for a specific location of the problem plus the contact information of the person asking for assistance. In some instances, users are asked to attach a digital photograph to the report to document the problem.

“We ask people for a description of the pothole, including a description of how big it is, such as ‘as big as a hubcap’ or another good indicator,” said Ed Pickens, street superintendent with the city of Sioux Falls, Iowa, which offers an online form for reporting. “We also want to know how deep it is, whether it’s two inches, four inches or whatever the case may be. Th ey also can add landmarks, such as ‘it’s near a fire hydrant,’ to give us a better idea of its location.”

Pickens added that his department still learns of many of the problems through phone calls or word of mouth. They utilize the reports to most efficiently manage their time in manpower. For example, his crews check each morning to determine if complaints have been reported for the particular part of the city they are working in that day.

“Th e website works well,” he said. “ It’s often our front line for learning about problems. It helps us to know where the trouble spots are so we can take care of them when we’re in that area of the city.”

Whatever the means of reporting, having the ability to pinpoint particular pothole problems through citizen reports has become an important tool that allows for better efficiency and cost savings in this age of ever-tightening budgets.

Until road engineers come up with a pothole-proof road, allowing people to assist by utilizing the technological resources at their disposal will, for the time-being, remain an important asset for highway departments in the annual battle against Mother Nature.