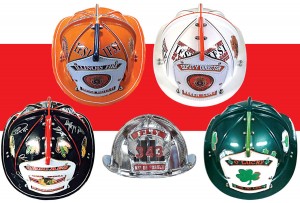 Firefighter Adam Culbertson of Tinley Park, Ill., has decorated more than 200 commemorative helmets from his home workshop. He began the hobby with a St. Patrick’s Day design for his son Troy, whose favorite color is green. The bronzed helmet commemorates 9/11 and now resides in the FDNY Fire Museum in New York. (Photo provided)

Like most Americans, Adam Culbertson remembers exactly where he was on Sept. 11, 2001, when he heard that planes had crashed into the World Trade Center. Unlike all of them, Culbertson has crafted a stunningly poignant and beautiful firefighter’s helmet to help his fellow citizens “reflect, remember, respect.”

He recalls an unfurling reaction he shared with multitudes around the country when he heard the news.

“I was at work at that time. I was not yet a firefighter, I was working for State Farm Insurance in Bloomington, Ill., when it came over the radio. Something was going down and we weren’t sure what was going on.”

At first he thought — or rather hoped — that the first collision might have been an accident, however unlikely. “Then we heard about the second target,” and he knew. Reluctantly, he forced himself to admit the undeniable.

“I didn’t see it until later, on television. You will never forget. Everybody changed that day. I think we were stunned.”

He recalls the frenzy of acquaintances trying to contact their families in New York, desperately seeking to verify they were okay. “It was an unreal, crazy day.”

The tragedy didn’t entirely prompt his desire to become a firefighter, but it certainly helped cement some yet ungrounded aspirations. Culbertson’s love for the fire service took root in a memorable incident in his youth.

“When I was in junior high school, my uncle was on a small volunteer department in southern Illinois. I was at their house on the Fourth of July. The fire department always rode the parade.

“My uncle told me, ‘Jump in the first rig and wave and throw candy’ along the 1½ miles route. But a funny thing happened on the way to the racetrack (where the parade ended). They got a call about a pregnant lady with breathing difficulties.” They peeled off from the parade assembly without stopping to let Culbertson out of the truck.

When they arrived Culbertson was instructed, “Grab that red bag and don’t let anyone else come up here without a badge.”

The responders got her in the ambulance and to the hospital, where she gave birth to a healthy baby.

They returned to his uncle’s house, but his adventure wasn’t over. “Hours later, there’s a knock on the door. It was the mayor, and he gave me a key to the city and a plaque for being the first on the scene.”

That was in the early 1990s. Fast forward to 2004: Culbertson, a lifelong native of Illinois, and his wife, Casie, moved to Tinley Park, where he became a firefighter on Aug. 5.

Life on the inside gave him a new perspective about the largest tragedy this nation’s firefighters have ever endured.

After a few years, “it was like the significance of 9/11 was getting pushed to the background. Everybody was like, ‘it’s just another day.’ But for some people it was a day you will never forget.”

When the 10th anniversary of 9/11 rolled around, Culbertson was firmly committed to do something to bring back the memory of what happened.

“Nobody had done a chrome helmet,” which he felt would be significant to the service and to the firefighters who lost their lives. He contracted to have two helmets chromed and decorated them identically with the names of the 343 firefighters who died in the line of duty that day. The helmet is chrome so that it mirrors the face of the onlooker, reflects the reflector and indelibly marks the unspoken kinship of the survivor with those who bravely gave their last full measure in that smoldering war zone.

One helmet traveled the nation in mobile tribute and now rests in the FDNY Fire Museum in New York. The other, once Culbertson’s own headgear, is on solemn display at the Illinois Fire Service Institute in Champaign.

The commemorative helmets constitute the magnum opus of a vocation Culbertson has plied for seven years. He has decorated more than 200 helmets in the workshop at his home. He began the hobby when he made one for St. Patrick’s Day for his son, Troy, whose favorite color is green.

“When I got out of the academy, I had some extra helmets and I had some metallic green paint for to paint a shelf. Everybody loved it.”

His next venture was a Chicago Bears helmet, which he created and then promptly stored in the garage for two years. At Casie’s suggestion he put it up for sale on the internet. “A cop in New Jersey, who was from Chicago, bought it for $510, plus $98 to overnight it to him for a game. That’s kind of how it got started.”

About 75 percent of his helmets are team or theme related. The others consist of custom-made mementos for retirements and company promotions.

Each helmet takes Culbertson about a month to complete.