↓
Home→City / Town Management→Civility: the good, the bad and the costly 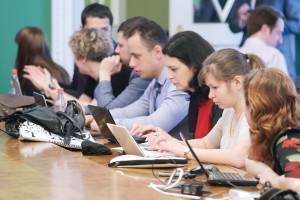 In some cases extreme levels of frustrations have first triggered inappropriate language, shouting and sometimes harassment, and then escalated to a violent response. Such an incident occurred in January during a New Eden, Minn., council meeting. (Pavel L Photo and Video / Shutterstock.com)

Your mother always told you: If you can’t say something nice about someone, don’t say anything at all.

It turns out that cities and towns could use some of Mom’s wisdom, at least where being considerate of others is concerned. That’s one of the messages shared at the 100th annual conference of the International City/County Management Association in Charlotte, N.C., in September.

Francine Ramaglia, assistant city manager of Delray Beach, Fla., focused on the topic “Civility: Heart of Community.” As an example of incivility, she compared the city she lives in and the city she works in, with the latter being “uncivil.”

“I used examples from news coverage — I saw a committee member using a Nazi gesture and talking about how they shut down a community website whose members commented about and argued at a public meeting. They paid elected officials (who behaved) that way and allow residents to behave that way.

“The city I live in, however, has a civility pledge. They often disagree, but are courteous while meetings go late. People treat each other with respect, so where I live versus where I work are two different communities.”

Ramaglia added that she likes to give examples of the way other cities have developed models that mandate civility, because there are some beautiful models out there.

The fourth annual nationwide study “Civility in America 2013” shows that incivility has reached crisis levels. Below are just a few of the many examples listed in the survey:

• 50 percent of respondents had ended a friendship because another person was uncivil
• 48 percent had de-friended, blocked or hidden someone online because of uncivil behavior
• The majority of Americans consider rude cellphone behavior uncivil
• Cyberbullying, road rage and an uncivil workplace can all lead to violence

ICMA conference attendees hear suggestions about how to maintain a civil atmosphere in the municipal setting.

According to Ramaglia, incivility happens due to egotism, a sense of entitlement, greed, a lack of self-esteem, mean-spiritedness, mental health issues, isolation, a lack of restraint, a lack of social and economic equity and a lack of fairness.

The effects of these traits include delayed decisions, inefficient use of resources, longer hours, greater absenteeism, deteriorating relationships, disheartened residents and a lack of trust.
Ray Gosack, city administrator of Fort Smith, Ark., lists coping mechanisms as ways of dealing with incivility, such as going to lunch with those who disagree, choosing one’s battles wisely and using empathy.

William Johnson III, city manager of Petersburg, Va., and a member of ICMA, took away from the conference the assurance that a lot of small cities are facing the same issues as dealing with social media comments about their city.

“I also learned how very important it is to keep the citizens advised of what it going on in the city. It’s important to have a system that tracks the citizen concerns and keep a record of what has been completed. We have implemented a government outreach process here in Petersburg.”

People’s feelings regarding the federal or state government translate to the local level, which can also create an anti-government sentiment, said Jennifer Maltas, deputy village manager of Buffalo Grove, Ill.

“Even my friends and family who are not in the field truly do not know what I do for a living or how easy it is to contact the municipality you live in and get answers to your questions. In Buffalo Grove, a community of over 40,000, staff and elected officials are extremely accessible. Once people get more involved in local government they see how easy it is to have an impact,” said Maltas.