↓
Home→Energy→Invest in Your Community’s Future — Invest in Solar 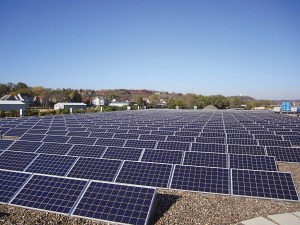 Solar PV (photovoltaics) is now an economically viable carbon-free energy source for municipalities to power a portion of their city’s electrical load. The economic viability of solar is a recent phenomenon in most places attributable to the downward trajectory of solar hardware costs and the upward trajectory of grid power. Many municipal leaders are focused on making their communities as sustainable as possible by implementing sustainability strategies wherever possible. Those strategies include installing energy efficiency technologies, reducing waste and resource consumption through management techniques and changing attitudes.

The arsenal of sustainability initiatives now includes energy generation from renewable resources, solar in particular. Solar PV converts energy from the sun, collected through solar panels into usable AC energy offsetting what would otherwise be procured from the municipality’s utility. In the past three years the installed price of solar PV has been cut in half. The trend for continued reduction in installed solar PV cost has slowed and begun to level out. The cost of utility grid power will continue to rise and that trend is expected to
continue indefinitely.

This is an area where great opportunities exist. All municipalities have significant underutilized and available economic potential; roof tops. Many building roof tops have abundant open space that can be utilized to capture emission-free, carbon-free, energy from the sun. The electricity generated from the sun on these rooftops offsets grid power purchases in a manner that demonstrates the municipality’s commitment to sustainability. 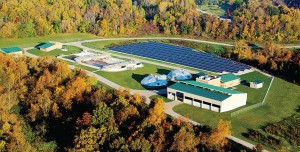 The obstacles for municipal solar have and continue to be economic in nature. There are two primary economic challenges to the wide adoption of clean energy for municipalities. The first challenge is the cost of the solar hardware and how it’s paid for. In the US, the economics that pay for solar come from tax credits and avoided utility cost. Utilizing tax credits associated with solar to reduce the capital cost of these projects requires a taxable entity that can monetize the available tax attributes. Without a taxable third party to accomplish this, a municipality pays significantly more for their solar installation. The primary economic incentives for taxable entities with respect to a solar array are the 30% investment tax credit and five year depreciation schedule on the capital cost of the solar array.

The second economic challenge deals with rate structures and tariffs that utilities employ to charge their municipal customers. In performing the economic analysis to justify these projects, city managers and administrators need to be cognizant of their utility rate structures. Utilizing the blended utility rates, which include both energy and demand charges, can be fraught with inaccuracy. While a municipal building may have an average blended electrical cost of $.10 per kilowatt hour, this will likely not be the economic impact of substituting solar power for grid power.

Depending upon the utility rate code a particular facility falls into, there will likely be a “demand” charge. This charge is normally based upon the highest 15 minutes of electrical consumption within a specified period, usually a month. Solar developers are unable to represent that solar power alone will impact the demand component of a facility’s utility bill because this demand peak may occur when the sun isn’t shining. There is a trade-off between “demand” and “energy” charges that can severely impact the economics of solar for a specific facility. Generally, the larger the electrical use of the facility, the more demand-centric a facility’s electric rate structure will be. Municipal leaders must be cognizant of how utility rate structures will be impacted by solar to truly reflect the economics of these investments.

Many utilities, both large and small, are reticent to allow third-party ownership of solar arrays because third-party ownership structures make solar economically viable for nontaxable entities, municipalities in particular. On July 11, 2014, the Iowa Supreme Court ruled in favor of Eagle Point Solar, allowing the Dubuque-based company to sell solar energy “output” to the City of Dubuque from a panel array located on a municipal building. This ruling allowed Eagle Point Solar and other providers of alternative energy to sell energy from solar arrays placed on the user’s property. This case was followed closely in many other states with similar regulatory structures. With third-party ownership of solar energy generation assets, municipalities in Iowa can now monetize the aforementioned tax incentives that make this technology feasible. While a taxable third party owns the solar array initially, the municipality enjoys the economic, environmental, and intrinsic benefits of clean energy by purchasing the energy through a Power Purchase Agreement.

Eagle Point Solar is one of many forward-thinking companies looking to make clean, renewable energy a practical, affordable and integral part of our nation’s energy portfolio. No one argues the many benefits that clean energy inherently brings from an economic and environmental standpoint. But it will take leadership to realize solar’s full potential – the kind of leadership we’re seeing from municipalities here and across the nation.

About the Author
Barry Shear, President of Eagle Point Solar, is committed to the wide spread implementation of solar power and the legislative policies that promote the growth of renewable energy systems. Barry founded Eagle Point Solar and has built it into one of the larger solar developers in the State of Iowa.