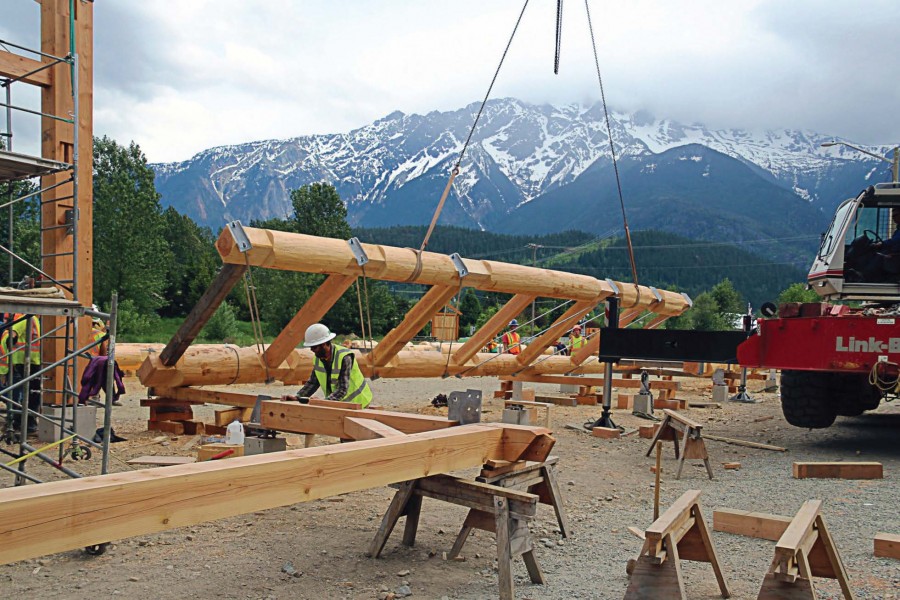 Portion of the barn is moved into place in May after being hand-hewn by members of the Timber Framers Guild, local craftsmen and apprentices. The nontraditional building method saved the town thousands in construction costs and gave residents a large measure of pride in the structure. (Photo provided)

There is nothing like a good old-fashioned barn raising to bring the community together.

When the village of Pemberton, British Columbia, developed its downtown enhancement strategy in 2010, residents knew they wanted an open-air venue to be the centerpiece of the revitalization plan.

A barn was a natural choice for the village, as opposed to a standard building. It was the kind of structure thats design embodied the area’s spirit. However, at an estimated cost of $1 million, the community barn idea seemed out of reach.

Then the cavalry arrived. Thanks to the financial support of the Whistler Blackcomb Foundation, private donations and a partnership with the Timber Framers Guild, Pemberton not only got its barn at a third of the price, but also initiated a true community project that will promote economic activity, village vitality and civic spirit for years to come.

“Everyone was really engaged and committed to this project,” said Mack McGee with the Timber Framers Guild. “It was great to have such a wide contingency of people working together. We had seasoned professionals as well as novices who had never done anything like this before.”
Inexperience was no problem. Newbies made up a portion of the 100-person, all-volunteer crew. One of the reasons that the Timber Framers Guild gets involved in community projects like Pemberton’s is to provide education to those who want to learn more about the time-honored timber framing process and participate in the construction of a local landmark.

“We had a 16-year-old who joined in for two weeks in order to earn school credit. We taught him how to cut mortises over the first couple of days, and before long, he was cutting right along with the crew,” McGee said.

The village was most appreciative of the guild members, who came from all over North America to donate their time and effort to cut, raise and finish out the 50-by-150 structure that sits between Main Street and the railroad tracks that run through the center of the village. Residents opened their homes and shared their food with the strangers; officials opened the village park as a campground for crew members; and community organizations and auxiliaries provided meals at the job site.

In choosing a style of construction, the village felt it landed on a design that both suited the environment and would serve the functionality planned for it. 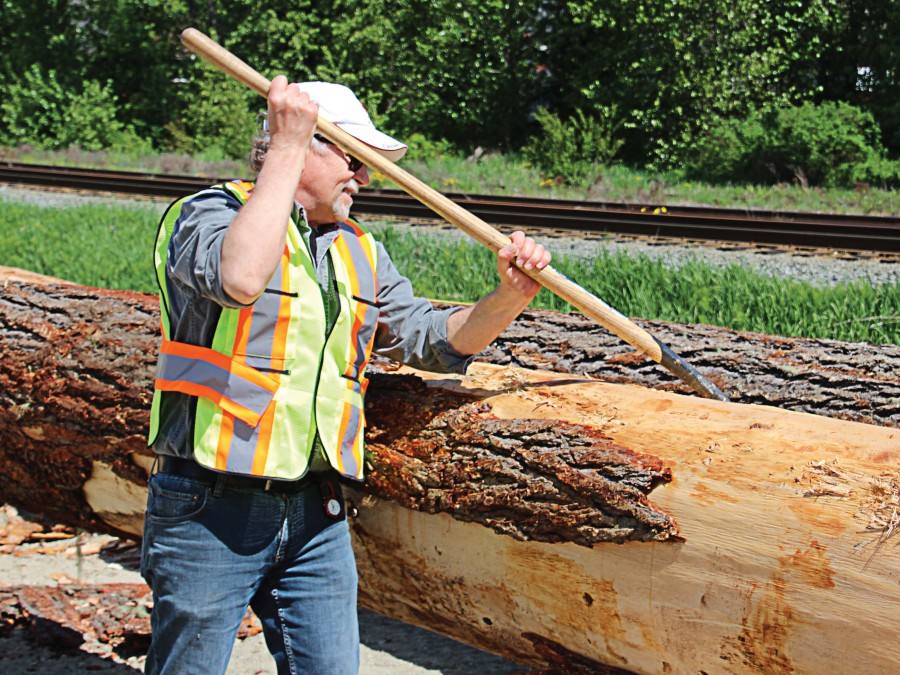 A volunteer scrapes bark from what will become a support beam for an open-walled timber frame barn in Pemberton, British Columbia. The 50-foot-wide and 150-foot-long structure, made of completely sustainable materials, sits downtown between the main street and railroad tracks that run through the village. (Photo provided)

“This dynamic open-air structure creates a sense of arrival to our downtown core, while providing a gathering space for a wide range of community activities ranging from the farmer’s market, art shows, outdoor movies and farm to feast dinners to kids camps, picnics and meetings. Our next component is how to best utilize the venue. The opportunities are vast,” said Pemberton acting Mayor James Linklater.

McGee said that a project such as the Pemberton barn is unique because even though the structure is built at a lower cost, the process is harder. There aren’t a lot of contractors and subcontractors helping the job go smoothly every step of the way; however, by engaging the community in the project, it inspires people to get involved. 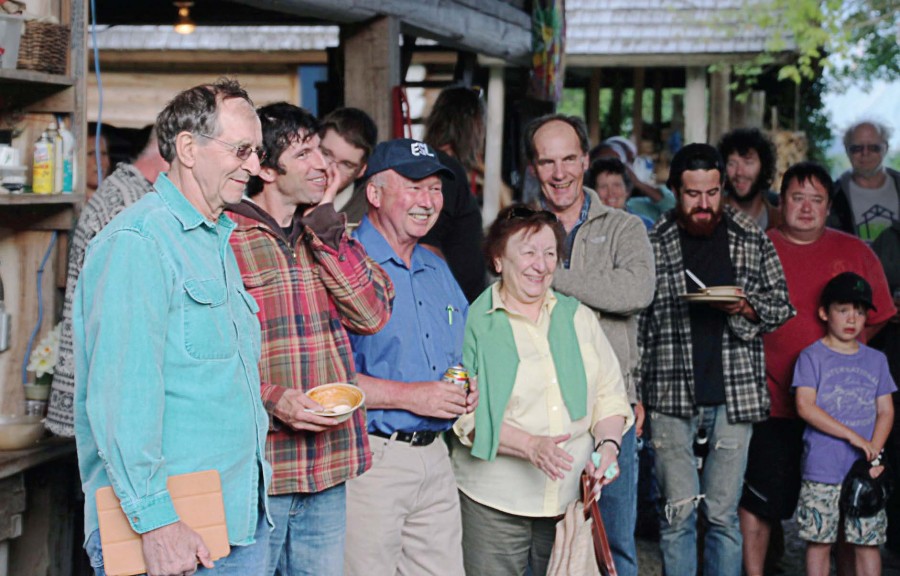 “There were a number of ways that this job could have gone easier, but then you miss out on the community involvement, which is vital to the overall project,” said McGee. “It’s a prideful thing for residents to feel like they have a stake in the barn because they had a hand in building it.”
Over the years the Timber Framers Guild has partnered with a number of agencies to build worthwhile structures that are built by volunteers for use by the public or nonprofit groups. Some of those structures include Habitat homes; battered women’s shelters; ecotourism centers; bridges and open-air pavilions in Vicksburg, Mich.; Frankfort, Ky.; and Duluth, Minn.; and an east Texas park.

“We do not work with private entities, but prefer to work on community or municipal projects that everyone can enjoy. Right now we are considering several projects for the future, including announcer platforms for the Mineral County Fairgrounds in Creede, Colo.; a visitors center in Charlottesville, N.Y.; and a bridge in Montpelier, Vt.,” said McGee. 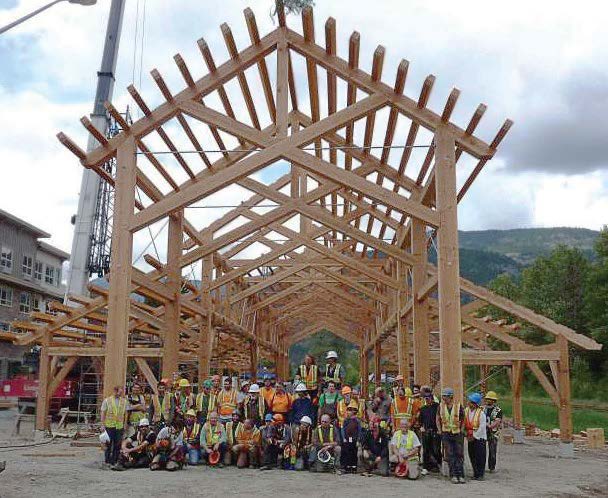 A group photo takes place following completion of the frame of a Pemberton, British Columbia. The open-air venue made entirely from locally harvested timber and constructed by the Timber Framers Guild, in conjunction with local volunteers. (Photo provided)

Brenda Baker, executive director of the Timber Framers Guild, said that the guild was thrilled by the collaboration they received in Pemberton. “These projects bring people together in ways you can’t even begin to imagine.”

Linklater agreed: “The downtown community barn assembled over 18 community groups, 57 international timber framers, over 65 local businesses and hundreds of local volunteers. The barn is a tangible, extraordinary reminder of what collaboration and extensive volunteerism can achieve.”