Introducing a casino to a community can elicit conflicting concerns and aspirations. Will it bring an increase in crime, or be a boon to the local economy? How can city officials best preempt the first and encourage the second?

When casinos are proposed, the perennial fear is that crime levels will rise: but research conducted across the country since the 1970s has shown mixed results. The link between casinos and crime differs from community to community and depends in part on the public’s attitude toward casinos.
In a 2003 article published in the journal “Crime and Delinquency,” authors B. Grant Stitt, Mark Nichols and David Giacopassi write that in communities supportive of gambling, “the casinos are viewed as significant entertainment and tourist attractions whose success is important to the community’s economic well-being … it is likely that greater protection of the community from increased criminal activities is provided by private casino security and public law enforcement agencies.”

This certainly appears to be the case in Cape Girardeau, Mo., and Des Plaines, Ill. Neither city has seen discernible changes in the level or type of crime due to the presence of a casino. This speaks a great deal to the cooperation between the cities and casinos, given the yearly volume of visitors coming to each establishment. The Isle of Capri in Cape Girardeau brings nearly a million visitors per year, and the Rivers Casino in Des Plaines attracted 4 million in its first year. Relatively minor issues, such as additional police and ambulance runs, have increased, but only as expected with any major tourist attraction.

Gambling proponents often promise that introducing casinos will create jobs, attract tourists and generate revenue for cities to use on infrastructure and other improvements. Several issues must be carefully considered when anticipating these prospective gains, though, including where the casino’s workforce lives, where patrons will come from and what businesses will be displaced.
A casino needs skilled personnel to provide security, accounting and other professional and vendor services. If the local workforce cannot readily supply these services, the casino will hire people from outside the community — meaning that even though the casino creates jobs, it will not significantly increase employment for the host city. On the other hand, a casino will directly boost employment if it hires mainly from the local workforce and will indirectly improve the economy through the multiplier effect when casino employees shop at area businesses.

This scenario also pertains to visitors. If the casino’s patrons are mainly local, it will merely mean a shift in spending from other nearby venues to the casino, resulting in no net gain to the economy. But if the casino can draw visitors from a wider region, money will transfer from the visitor’s community to the casino’s host city.

Each of the two cities experienced increased employment and tourism when its casino opened, although not without some consequences. Restaurants in downtown Cape Girardeau were displaced when they could not compete with the Isle of Capri, but the casino also initially offered 700 jobs and still employs more than 500 people, mostly from the community. Michael Bartholomew, city manager of Des Plaines, shared that the Rivers Casino also gave a great boost to its employment, originally adding 1,000 jobs and offering hotel accommodations in the city when there previously were none.

Along with job creation, gaming revenues present another potential benefit for cities. Revenue is collected through admittance fees and various forms of gaming taxes. The state and city divide a portion of the gaming taxes, with percentages varying widely state by state; however, it is typically the case that the majority of gaming tax proceeds stay at the state level. For example, in Missouri, 90 percent of the gaming tax goes to the state’s education fund, while the remaining 10 percent goes to the host community. Missouri also has an admittance fee for riverboat casinos, which is evenly split between the home dock community and the state.

“We have a four-point plan for the use of casino revenue,” said Cape Girardeau Mayor Harry Rediger. “We share with the county and two adjoining cities, set aside a legacy fund of one year’s revenue; we have a renovation fund, and half goes toward the capital improvements budget.”
After weighing the potential costs and benefits of a casino, how should a city draft its proposal when seeking a license from the state? What is a state looking for in the development plan? 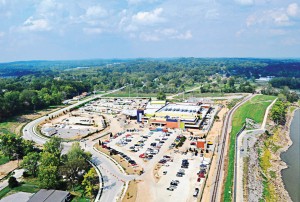 Proposals for casino development typically polarize communities. Since a casino was built in Cape Giradeau, Mo., in 2012, the city has seen minimal displacement of local business and an uptick in emergency response only on par with the average tourism destination occurred. (Photo courtesy City of Cape Girardeau)

When the Missouri Gaming Commission was considering where to grant the state’s 13th casino license, it conducted a comparative study among three prospective cities. The report anticipated how a casino in each location would affect gaming tax revenue, employment and state gross domestic product. The commission was particularly focused on “sales cannibalization,” referring to the profits that a new casino would take by competing with existing casinos. The state derives the greatest benefit from an additional casino when its territory overlaps the least with existing establishments.

Des Plaines’ development plan had to compete against five cities. Des Plaines offered $10 million a year for 30 years to the state of Illinois; of the remaining revenue from gaming taxes, 40 percent is distributed among the 10 most economically distressed cities in the state.

Overall, the city officials interviewed felt that their casinos have been great civic partners and contribute positively to the city’s image.

“They [Isle of Capri] have been a great partner by sponsoring and hosting events and by being involved in community activities,” said Rediger. “We talked to a lot of other mayors and vetted companies for this specific aspect.”

Bartholomew expressed similar sentiments and added that, “Whenever the casino advertises abroad, the city name follows it, marketing the city as well.”