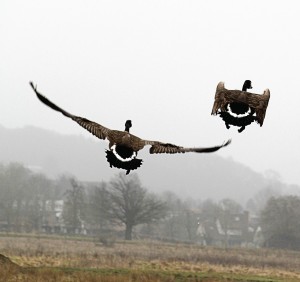 You build pavilions, groom beaches and employ lifeguards only to watch fowl intruders chase residents out of their own lakeside park?

It was 2012 when employees of Howell Area Parks and Recreation Authority, north of Detroit, Mich., decided to put down the rakes and escalate efforts to clear the beach at Howell City Park of Canada geese. In August of that year, city officials had been forced to close the beach, which is on Thompson Lake, because the animals’ droppings had raised the E. coli in the water to an unsafe level.

Even before the level became elevated, geese droppings had fouled the beach and picnic area. Occasionally, the confrontational birds would also threaten to tangle with park users.

Determined to give humane solutions a try first, the staff opted to purchase several life-like coyote statues in hopes of preventing the birds from landing in the area.

“We started out using the coyotes. But if you don’t move them every day, then the birds get wise and start ignoring them,” said HAPR Assistant Director Beth Schrader.

For a while employees did just that, moving the coyotes to different locations even on days that the beach was closed. “We were really famous for it for a while, but it did get tiring, all the moving. So we started looking for more of a long-term solution.”

The authority’s follow-up strike consisted of a goose round-up. At the beginning of the 2013 swim season, a company called Gooseworks used a combination of snow fencing — which the geese won’t fly over — and dogs to round up the birds for transport to another location, where their flight feathers were clipped to prevent them from returning to the beach. It did some immediate good: Schrader saw a surge of people enjoying the lakeside facilities, purchasing passes and boating last summer.

“We never thought it would work so well. We had the best numbers ever last season,” she said. “I think, too, it has to do with the economy and people staying closer to home on vacation. We had to address the problem anyway, but we’re particularly glad that we’ve done it now.” While HAPR can’t be sure until the weather warms up this year if that procedure further reduced the number of return geese, it has one more “trick” up its sleeve; the department purchased tall feather flags emblazoned with the town logo — that will be installed on the perimeter of the swimming area.

“They hate the sounds of the flags flapping in the breeze, we’re told. So we’ll see what happens.”

Hoping for the best, staffers have put the first Howell sand sculpting competition and treasure hunt on the schedule for August. Plans also call for an annual favorite, the Howell Lake Aquathlon, to take place in July.