“It’s something that people have on their bucket lists,” said Superintendent James Pynn. “It has become the chic thing to do, spending Valentine’s Day getting to know the New York City sewer system.”

Located in Brooklyn’s Greenpoint community, Newtown Creek is the largest of New York City’s wastewater treatment plants. It serves 1.1 million residents and 1 million commuters over 25 square miles, processing 310 million gallons of water per day. The facility has unique architectural features, landscape and environmental sculptures, and offers stunning views of the city along with educational opportunities.

Becoming the butt of a joke 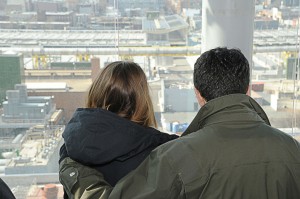 Pynn said that the Newtown Creek facility has offered tours on the second Tuesday of every month for quite some time. Three years ago Valentine’s Day coincided with the tour date, and he received a call asking if there would be something different about that day’s event.

“I told the person that I would give out a Hershey’s Kiss to everyone who showed up, and somehow the news went viral,” he said. “Within two days I was giving interviews locally, nationally and internationally about why ‘love stinks.’ We were even the butt of jokes on Jimmy Kimmel and Jay Leno.” 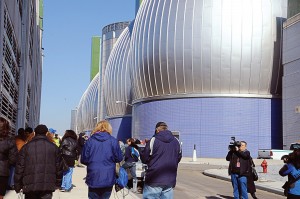 All kidding aside, folks who came out for the free chocolate were impressed with the Newtown Creek facility and how it meets the community’s environmental and aesthetic concerns.

“It’s a great way to give positive education about the facility and what we do here,” Pynn said. “Wastewater treatment facilities are one of those invisible services. Most people do not think about what happens when they flush the toilet or unplug a bathroom drain. Even though the Valentine’s Day tour started out as a joke, we welcomed the opportunity to share what we do with the public who really appreciate seeing it first hand.”

In addition to its monthly tours and special Valentine’s Day event, the Newtown Creek facility has been one of the stops available on the Open House New York weekend, which includes more than 400 destinations throughout the city. Pynn said Open House New York offers residents and visitors the chance to go behind the scenes and have free access to some of the city’s most notable landmarks, including the tunnels below Grand Central Station, the lights of the Empire State Building, Grant’s Tomb and the World Trade Center.

“We’ve been part of the Open House New York event for eight years now, and we’ve had 700 people filter through here to see the place. The interest has been just amazing.”

Pynn has worked as a manager at the plant for 21 years, but he really enjoys his “second career” as a tour guide. Not only does he guide couples through the giant “eggs” on Valentine’s Day and visitors during monthly events, but he has played host to delegates from the U.N. in addition to school children who tour the plant as part of their curriculum.

“A lot of cities offer tours similar to ours, but not everybody hears about it,” he noted. “They need to do more to promote it, and if they don’t have a program in place, they need to embrace one. It’s a great way to engage the community about wastewater treatment, show what happens to the water and sewage in their community and educate kids about the importance of stem (science, technology, engineering and mathematics) in their academic and vocational careers.”