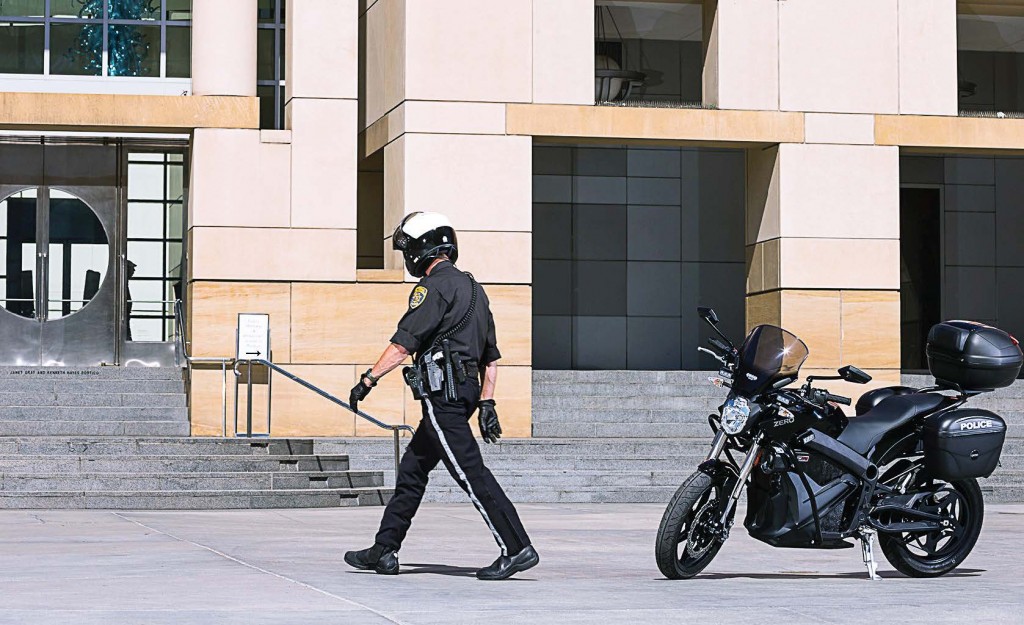 While electric motorcycles tend to have a charge range of 100 miles or so, that’s double the average mileage covered during a patrol officer’s shift. The vehicle’s top speed is around 100 mph. (Photo provided)

Police officers across the country are getting a new, nearly silent partner: electric motorcycles. While the bike’s stealth is a factor in their growing popularity, other features also make the motorcycles an attractive choice.

Officers cite the maneuverability of the bike, making it particularly suited for use in parks, on trails and on college campuses. The light weight allows for travel on more challenging terrain than conventional bikes could handle, and electric models are less tiring to ride than traditional motorcycles. Officers can even ride indoors, said Kevin Hartman, sales director for Zero, a manufacturer of electric motorcycles.

“Basically, there isn’t any beyond tire changes and chain wear. No oil changes, no carburetor, no tune ups, no warm-up needed, no valve jobs, no muffler problems, basically nothing. When the bike comes in after patrol, you just connect it to the ‘smart’charger and walk away,” said Mike Arman of Germany’s Muench electric motorcycles.

Top speed is usually around 100 mph, and fully charged range is about 100 miles for a model made by Brammo Inc., 132 for the Zero. But Hartman disputes that these constitute limitations because most motor officers average about 50 miles of riding per shift. “Our customers are reporting having no problem getting through a full shift on a charge. The battery can be charged or “topped off” any time the officer has the opportunity. Charging can be done from a standard 110 volt outlet, and we also offer options for quick charging and adapters for public charging stations.” Much of the California-based company’s sales have been made to northern cities, but Georgia and Virginia are warming up to the idea.

Due to the layout of the campus, for example, it’s often difficult to reach some parts of the University of South Carolina effectively with the limited mobility of division patrol cars. Many areas on campus are blocked off or often congested with pedestrian traffic. Motorcycles allows officers to maneuver in and out of tight locations and increases the mobility of patrol units.

“The Division of Law Enforcement now uses electric motorcycles, which require no gasoline and even the battery is 100 percent recyclable. Remarkably, the cost of operation is approximately $1 every 100 miles,” said Harris Pastides, president of the university.

Although the bikes weren’t originally designed with police work in mind, manufacturers are now working closely with police officials to meet their requirements.

“…California has been very proactive in clean air legislation and providing grants and funding assistance to municipal fleets for alternative fuel vehicles,” said Hartman. “We expect to see more states follow suit as interest continues to grow in our motorcycles and more departments add them to their fleet.” 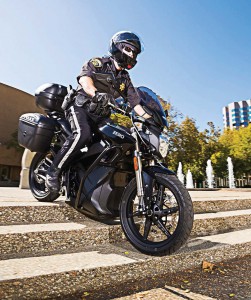 Electric motorcycles can handle terrain that’s awkward for conventional cycles, and they are generally easier to handle. (Photo provided)

The electric bikes are environmentally friendly, a positive for many departments. That also translates into money saved. They are also, of course, emission free. Police models for electric bikes cost between $17–$20,000.

But one area to be overcome before electric motorcycles are fully embraced, Arman said, is the bias some officers accustomed to riding traditional, gas-powered motorcycles might have against electric motorcycles. “Until they ride one — then they change their minds instantly; the performance is so superior that riding anything else is like riding a boat anchor.”

Police departments in California, Oregon and Kansas City, and at Colorado State University, Harvard and other universities are experimenting with the idea. Annual fuel costs of motorcycles can be slashed by between 80–90 percent and maintenance costs cut between 75–95 percent by making the switch to electric bikes, Zero reported.