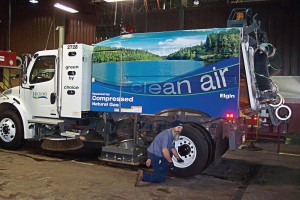 Hickory, N.C., was the first East Coast city to purchase a CNG street sweeper. On its CNG vehicles, the city completes what repairs it is able to and then must call in outside technicians to do the rest.
(Photo provided)

New technologies and alternative fuels provide cost savings in certain scenarios, in addition to showing citizens their municipalities are environmentally minded. As fleets across the country integrate these technologies — whether they are natural gas, propane, biodiesel, or another alternative — they are facing challenges. Budgets often limit what managers can bring into the fleet. They are also in some instances undercutting municipalities’ abilities to attract qualified technicians who can work on these cutting-edge technologies.

Hickory, N.C., with a population of approximately 40,093, is one city that has found a balance when it comes to integrating new technologies into the fleet.
“We’ve been in Compressed Natural gas since 2000,” Fleet Manager Doug Ingle said. It has eight CNG pickup trucks and was the first East Coast city to purchase a natural gas street sweeper. The city also maintains a natural gas station, which it received grant money to install.

Beyond CNG technology, some of Hickory’s fleet is running on B5 biodiesel.
These alternatives have their benefits, according to Ingle, but they can provide challenges. He noted, “It’s cheaper to run fuel itself but the drawback to CNG is when you have to replace parts. The parts are very expensive. Not a lot of people can work on them.” Ingle added, “We have to call someone to work on them. We don’t have a lot of the diagnostic. We do some of what we can, but most of the time we call to have someone to come in.”

“I think it will get better as more infrastructure comes into place,” Ingle said, noting CNG is starting to take off in the garbage industry, which will drive down prices. But at the same time, it will create more demand for technicians. 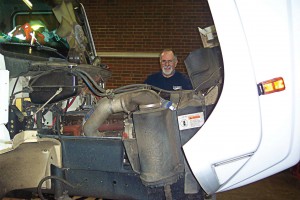 “Since 2008 — since things got tight — it’s been hard to send people for a week,” Ingle said, noting the city has needed everyone on board in the garage. Understanding these municipal needs, sgfma and other organizations have begun to implement one-day courses rather than the week-long ones. Hickory takes advantage of such opportunities when they become available.

Beyond further training existing employees, finding qualified workers can be particularly challenging. “People are not going into this industry like they used to,” he said. He noted small- to medium-sized cities tend to look for their employees more locally, making it hard to draw quality technicians. Tight budgets also play a major factor. “You can’t get experienced people for the amount municipalities can pay.”

It is a trend when job hunting people look largely at the paycheck sizes, rather than the good benefits many municipalities often provide to their workers.

Since 2008 Hickory has been in a holding pattern when it comes to hiring with all appointments being approved through the city council; however, the last three hired in have been exceptional, according to Ingle. 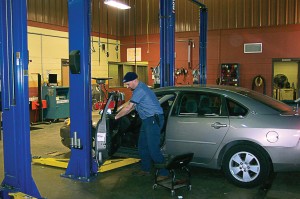 When seeking employees, Hickory looks for candidates with good attitudes and morals who are willing to work. (Photo provided)

“We look for good people willing to work and who have good morals and attitudes,” Ingle said. If they have those, they can be trained to do what a city needs them to be trained to do. Occasionally, Hickory also looks at area colleges to see if there are good candidates.

“It’s kinda worked for us,” Ingle said. “We don’t have a lot of turnover in the garage. One or two retire or one moves across the country. Other than that, they pretty much stay.”

Ingle said it’s important to find candidates who are willing to do what the city wants them to do, and then to treat employees fairly and honestly. “They’ll reciprocate those behaviors.”