For several years, the U.S. Environmental Protection Agency has been hashing out changes to the Clean Water Act stormwater regulations. A final version is expected this year.

The renewed focus on water quality is warranted by the fact that stormwater is the leading cause of water quality impairment — and the problem is growing, according to studies performed by the EPA and the states of New Hampshire and New York, among others. But as of September, expectations of how the proposed stormwater rule will affect municipalities were still not entirely clear. 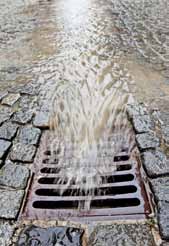 Impervious cover is concentrated in urbanized areas that constitute only 2 percent of the land area but that contain much of the country’s population. With the EPA’s updated stormwater rule, the agency hopes to change the way people think about stormwater issues resulting from development.

At the American Public Works Stormwater Summit in August, Connie Bosma, municipal branch chief of the National Pollutant Discharge Elimination System, discussed the proposed changes with an audience of professionals who will be responsible for implementing the rule.

“We hope to change the way people think about stormwater; we’d like to have people view stormwater as a resource, not a waste. Capture it, slow it down, infiltrate it — that’s the ideal.” Currently, she told participants, impervious cover is concentrated in urbanized areas that constitute only 2 percent of the land area but contain much of the country’s population.

The agency is looking at establishing performance standards and discharges that would apply to newly developed and redeveloped sites in Municipal Separate Storm Sewer areas. In order to encourage systems in the same watershed to work together and prevent the downstream flow of pollutants, the options being considered include expanding MS4s into smaller cities or incentivizing voluntary cooperation with the same. “If you’re in the population of an upstream watershed and you’re in an MS4, our hope is to bring you in,” she said.

The threshold for an urban area to be brought in to the stormwater-regulated universe is currently 250,000. According to Bosma, a geographic expansion of existing MS4s is no longer being considered.

The U.S. Environmental Protection Agency is looking at establishing new Clean Water Act performance standards that would apply to newly developed and redeveloped sites in Municipal Separate Storm Sewer areas. The rule is expected to come out this year. (Shutterstock photo)

A new approach to the performance standard would include a retention component and require that sustainable stormwater controls be incorporated into sites as they are developed; however, according to the EPA, a range of options is being consider that would allow site owners and communities to comply in alternative ways if the site has constraints or if an alternative local program would provide an equal or greater level of protection.

“It’s a little bit of an off-the-shelf approach, but if you have an alternate idea of what we can do, we’d like to hear it,” Bosma said.

Approximately one-third of states already have a comparable program to manage stormwater runoff. To encourage redevelopment, a relaxation of standards for redeveloped sites is also being discussed. Additionally, consideration will be given to developers according to site-specific hydrological issues and how those issues will be affected by the intended use. Recreational aesthetic uses have far less impact on human health than, for example, farming.

Pervious pavements and vegetated curb bumps are two of the easiest ways of encouraging absorption. But as Julie Ufner, associate legislative director for the National Association of Counties pointed out, there is not a one-size-fits-all model for green infrastructure.

During the session’s question and answer period, moderator Paul Hindman voiced a common concern of water treatment professionals who were present.

“We heard a rumor that we were going to have to retrofit,” he said. “So you’re telling me that’s not going to be the case?”

Originally, Bosma said, that the plan was to require cities to develop retrofit plans that would be implemented over a long period of time. “That’s no longer on the table.” However, even though retrofitting with green infrastructure isn’t feasible in every situation, as new development occurs it’s the most effective way to reduce water pollution. “If the country doesn’t take steps in this new direction, then fixing the problem will cost much more down the road.”

Ufner reiterated that the changes would potentially encompass new development, possibly redeveloped sites and those that discharge to regulated MS4s.

“I’m glad to learn that the EPA is considering building flexibility into the program. But the devil’s in the details,” she said. “You’re proposing standards that will possibly increase the geographic areas of MS4s. NaCo is concerned that if you expand the program, costs will fall disproportionately on smaller communities.”