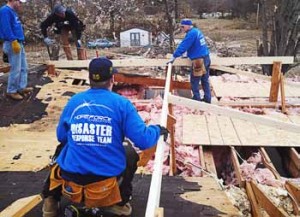 On Nov. 17, 2013, tornados left eight dead and a trail of damage in the Midwest. From Brookport, Ill., to Kokomo, Ind., the events of the stormy weekend also destroyed the homes of dozens of families and left over 100 wounded.

Brenda Warren and her family of Washington, Ill., were packing to move from their rented townhouse to a new home they had just closed on a week earlier when she received a warning on her phone to take shelter. Her husband was out so she and the children quickly drove to the new house — which had a basement — and rushed inside.

“The sound of the wind was incredible. The massive roaring sent me running faster than I ever had in my life. I grabbed the boys, huddled into the closet and started to pray. In seconds we heard pops, crashes, rips and glass being shattered. Our roof was gone, the walls were cracked, windows blown out and the garage obliterated with my car underneath it.”

Volunteers were instrumental in helping the affected cities get back to something approaching normalcy. The mayor of Kokomo, Greg Goodnight, wrote an open letter thanking those who gave assistance to the city after it fell victim to two tornados that night.

“Our city has been touched by the thousands of volunteers from across the Midwest who have extended their services to offer help in our time of need,” he wrote.

He also noted “more than 15 mayors from around the state reached out to provide assistance to our community … providing dump trucks, pay loaders and backhoes along with the crews required to operate this equipment.” Others sent food, water and toiletry items. The state’s governor, Indiana State Police and Department of Homeland Security also assisted during relief efforts.

One of the agencies that stepped in to help the wrecked cities was Hope Force International, a nonprofit organization dedicated to disaster response. According to Joey Stoltzfus, team leader for the Brookport, Ill., deployment, its volunteers quickly helped 20 residents tarp their roofs and clear debris in a community of about 1,000 people.

“Our focus with our reservists during a tornado response is to help mitigate homes from water penetration by applying blue tarps in a fema approved manner to damaged roofs,” said Stoltzfus.

It takes not only local authorities and agencies, but others to bring back together a community in crisis. Hope Force assists with such relief.

“When we enter a disaster situation we come to serve, assist and partner with local authorities and other agencies as much as possible,” he added.

Warren waited impatiently for word of her husband, but he was busy rescuing a man from a pile of rubble and giving him medical treatment until an ambulance could reach him. When he was able to contact her, he told her that their townhouse was also destroyed. The family had lost not one but two homes in a single day.

First-time Hope Force reservist Barb Eddy felt she received as much as she gave during her time in Brookport. “Our house busted,” four-year-old Amber told her. Then the little girl with the owl hat said a phrase Eddy heard repeatedly from those who had lost everything: “It’s just stuff.”

Despite losing the homes, Warren did not focus on what her family lost. Instead, she noticed the hundreds of people helping one another that day.

“Whether it was the volunteers passing out hot soup, masks and gloves, lending out their trucks so people could gather what was left from the wreckage, or strangers offering to help search for lost pets, this was … a very humbling experience. The kindness and compassion I have witnessed from the community and even strangers from afar is absolutely amazing.”

While Eddy helped many displaced families pick through the rubble of their things to see if anything could be saved, what she most often did was listen — something she and the others in Hope Force are trained in. They call it “ministry of presence.”

“It’s okay to not say anything,” she learned. “The more they told it, the easier the burden became.”

Kokomo’s mayor spoke of the coming weeks for the ravaged city and said that the aid they received is something he is more than willing to provide should such disaster befall other towns.

“I can only hope that no one will endure the devastation that Kokomo has, but if they do, I am confident that our citizens and our city will be the first in line to ask, ‘How can we help?’”

Goodnight added, “The support from these cities, elected officials, organizations and individual volunteers have provided relief to many of our citizens as they begin the process of rebuilding.” 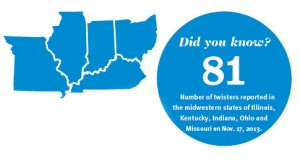