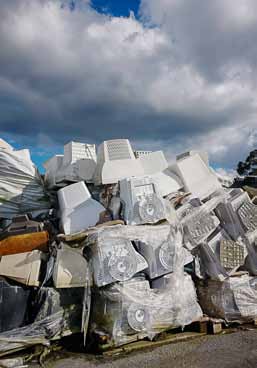 Computers, televisions, tablets, cell phones, game consoles and iPods: They’re the gadgets and gizmos that revolutionized the world and have changed how we live and work. But the same devices have also given rise to the latest threat to our environment: electronic waste.

Each year when the “next big thing” is announced, consumers toss their old devices — lining landfills with a variety of toxic materials that pose a threat to the public health. The EPA says e-waste is an epidemic that’s growing at three times the rate of other municipal waste, and it’s a concern that has communities and companies rethinking their recycling and recovery processes.

CRTs are the glass video display component of electronic devices such as a televisions or computer monitors. They contain enough lead to render them hazardous when disposed of. Once upon a time, these tubes were recycled profitably for use in new products, but as advancements in technology have replaced CRTs with fluorescent lights, there is less need for the recycled material, resulting in huge stockpiles of the hazardous tubes throughout the country.

Kuusakoski Recycling US said cathode ray tube glass comprises the largest portion of the e-waste stream. End-use markets for CRT glass recycling are limited, and as a result many recycling processors have little choice but to stockpile CRTs.

“The lead is still used in products such as car batteries, but there is a diminished need for recycled CRT material,” said Jason Linnell, executive director for the Electronics Recycling Coordination Clearinghouse. “There are still some factories in India where it is being accepted and some smelters are taking it from select clients, but it is very expensive to ship and not as profitable as it once was. As a result, smaller recyclers have gone belly up and have left the material behind.”

News reports highlight discoveries of warehouses full of old computer monitors and television sets that create a toxic problem when the owners of these operations disappear without a trace. With approximately 660 million pounds of glass stored throughout the U.S., it could cost as much as $85 million to $360 million to recycle it. The problem is a serious one that requires thoughtful processes that are environmentally responsible as they create opportunity for communities.

“Luckily there are new technologies being developed that should help us manage CRT recycling and recovery effectively domestically,” he said.

In July, Nulife Glass of Manchester, England, announced the launch of a $3.7 million facility in Chautauqua County, N.Y., with a recycling furnace technology that will process up to 10 tons of funnel glass per day. Nulife’s process extracts the toxic lead from the glass in a safe and environmentally sustainable way without waste or exporting hazardous material around the globe.

While the facility is still in the planning stages, it will have the capacity to accommodate more than 200 million pounds of CRT glass.

“We are very pleased to locate our first North American expansion in New York state, the Buffalo Niagara region, and specifically Chautauqua County and the town of Sheridan,” said Nulife owner Simon Greer. “The welcoming business environment that Buffalo Niagara Enterprise introduced us to and the reception we received from our state, regional and local partners was tremendous. Everybody we talked to did what they said they were going to do and now here we are,” Greer added.

In addition, ECS Refining of California offers one of the few complete domestic solutions for CRT devices and boasts the most sophisticated, full-circle recycling process in the world. Its three-step process removes the CRT from its enclosure, sorts through recyclable elements, such as plastic, copper and steel, and then prepares the tube for lead smelting.

Closed Loop Recycling and Recovery Inc. of Arizona has established plants throughout the country to extract lead from funnel glass through an EPA compliant proprietary technology designed to meet today’s challenges and tomorrow’s opportunities. Closed Loop says recycled CRT glass has a number of possible applications including its addition to substrates used in concrete building blocks. Based on historical data, this addition appears to increase the strength of the block by 30 to 35 percent. It lasts longer and is perfect for bridges since it doesn’t break down like concrete,” the company said. 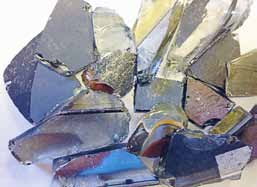 CRT glass prior to recycling. End-use markets for CRT glass recycling have become limited, and as a result many recycling processors have little choice but to stockpile it. (Photo provided)

Kuusakoski partnered with Peoria Disposal Company to offer a recycling process to collect, sort and crush CRTs, in addition to treating the crushed glass with a proprietary chemical that stabilizes the lead to prevent leaching lead from the glass. The treated material is then beneficially used as alternative daily cover to support operation of a municipal waste landfill.

“The treatment and beneficial use of CRT glass by PDC provides access to an additional, domestic CRT glass processing facility and end-use market.” Bowers said.

Beneficial use of treated CRT glass, in conjunction with other existing and proposed processing facilities, will help to address the immediate and long-term demand for CRT glass processing. Using treated CRT glass as ADC provides an environmentally and socially sound option that offers an additional end-use market that provides a dual purpose: preserving virgin soil while also creating an answer to the CRT glass recycling problem.