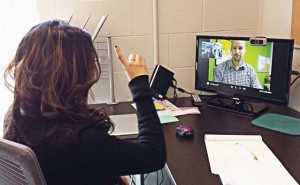 Dhrupal Patel, left, signs on the VRS screen with Mike Helms, director of Programs and Outreach at Bridges, a hearing-impaired assistance organization in Tennessee. (Photo provided)

A phone call through a relay operator to the mayor’s office gets hung up on without a deaf citizen even being able to identify himself. He calls back four times with the same result. Frustrated, he gets in his car and makes the 12-mile round-trip to the mayor’s office to get his issue taken care of.

For each person who takes it upon themselves to show up and explain what a relay call is, there are hundreds of others, nationally, whose third-party calls continue to get hung up on — even when those calls are to city government officials or police, fire and communications departments.
In the past, circa 1974, if a deaf person wanted to communicate with city officials or police and fire personnel, he had to drive to the appropriate office or station. 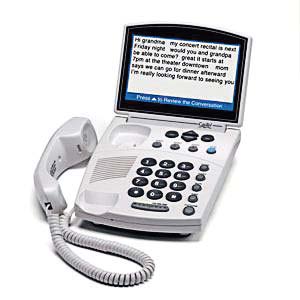 A CapTel, or captioned telephone, which utilizes the latest telephone technology and allows people to receive word-for-word captions of their phone conversations. Spoken words appear as written text, much like TV closed-captioning.
(Photo provided)

Since then the Telecommunications Relay Service has proven to be a godsend to the deaf community. But it has also opened the door for telemarketers and scammers, leaving hearing people reluctant to accept such calls.

A relay call is a 24/7 free service that provides phone service to people who are deaf, hearing-impaired, deaf/blind or speech-disabled. It allows text telephone or computer and mobile users to communicate with standard phone users via trained relay operators. These operators are middlemen who use both keyboard and voice to convey messages back and forth. A transcript of the conversation can be printed out or saved on either the TT or computer for later reference. Spanish relay is also available.

A hearing person who wishes to communicate with a deaf person may dial 711, the national relay system number, and ask the relay operator to call the number of the TT user he wishes to reach, and vice versa.

Relay operators are bound by a code of ethics regarding consumer rights to privacy. Certain offices are reluctant to convey confidential information via the third-party relay system, but once they understand the necessity of it, they will usually cooperate. 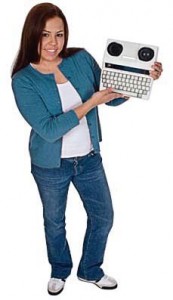 A text telephone: The two rubber cups at the top are what the phone receiver is placed in. (Photo provided)

Relay operators are required to report every sound heard over the phone to the TT user. This includes not only such mundane events as “dog barking in background,” “TV blaring,” “children crying and fighting,” but also intensely personal information such as “caller burped loudly,” “smacking lips and swallowing sounds,” “toilet flushing,” etc.

According to Donice Kaufman, case management specialist for Bridges — formerly the League for the Deaf and Hard of Hearing and the EAR Foundation — in Nashville, Tenn., there are many deaf people in her home county.

“Based on the 2011 Census Bureau Community Survey, there are 16,475 people living in Davidson County who have a form of hearing difficulty,” she said. “But since the census asks folks to self-select, it’s highly likely these numbers are low … when I’m speaking in public, I usually round and say, ‘In Nashville and Davidson County, we have approximately 2,000 deaf individuals and more than 16,000 hearing-impaired.

“If you move it out to middle Tennessee, over 65,000 have some form of hearing loss. In fact, one in three adults over 65 has a hearing loss of some form.’”

The teletypewriter used to be the only way to communicate with someone who has hearing loss. It’s nearly obsolete today, however, due to video relay services technology and mobile devices that are used — via relay — to bridge the gap between deaf and hearing conversations. Still, hang-ups persist.

“Probably 99.9 percent of my clients have been hung up on when making a call,” said Kaufman. Her job is to educate, advocate, support and provide referral services to her clients.

Because of so many hang-ups, Kaufman, who is hearing, has had to act as a go-between by calling the hearing person to explain the relay service and request that the callee not hang up when the deaf caller calls back.

Hang-ups aren’t the only challenge the hard-of-hearing face when trying to contact municipal office or first-responders.

The friend in Knoxville contacted another person in Nashville, who then called the local 911 and gave them the address. But precious minutes were lost and the man died two days later. Tennessee has since pursued the idea of starting Text 911 services. Another initiative, Emergency Awareness and Readiness Services, is addressing all of this issue; first in middle Tennessee, with the goal of engaging the whole state.

“One thing I have learned about first responders is that because of turnover, they forget or they don’t know about the invisible disability of deaf people. That’s where they get into trouble.”
Relay scams still exist today, but are less frequent. More scams occur via email or text. Emailing and texting have also proven to be a great blessing to the deaf community. But for most cold calls and business calls to hearing parties, relay is still the most practical solution. 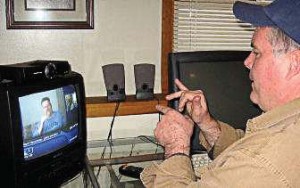 “The national relay call number is 711. We try to emphasize that it is not an emergency number, but merely a number to the relay operator to place the call, while 911 is the national emergency number,” said Marsha Moore, director of public relations/development for the center. “The 711 relay number is dialed by either a hearing person calling a deaf person, or vice versa.”

It’s helpful when city and county departments update their relay/TT call training. Previously trained people leave jobs and new employees are hired. If few relay calls come in, then hang-ups usually begin again, resulting in bad feelings between citizens and government employees. First responders’ offices should absolutely have a TT for residents who still make their calls directly by TT rather than through relay, especially during emergencies.