How many times have we heard of a fire apparatus crash that occurred while a vehicle was rounding a curve? There are many reasons for this, most of which revolve around speed.

Critical speed is determined based on how sharp the curve is, how much bank is in the roadway and the road surface’s “stickiness,” or coefficient of friction. By measuring these three factors and plugging them into a formula, the critical speed of a curve can be calculated.

Let’s examine a curve in the road that has a radius of 200 feet, a curve not uncommon to most districts. On a sunny day with dry asphalt, the critical speed of this curve would be approximately 51 mph. A driver traversing this curve at 40 mph would safely navigate the curve and not think twice.

Imagine that the next day it rained. This change in weather conditions would lower the critical speed of the curve to approximately 34 mph. If the same driver, who previously drove through this curve at 40 mph on a sunny day, attempted to do the same thing on a rainy day, he would find himself spinning off the roadway. This is because the rain caused the critical speed of the curve to drop to from 40 mph to 34 mph. By driving faster than 34 mph, the vehicle lost traction with the road surface and the driver lost control. 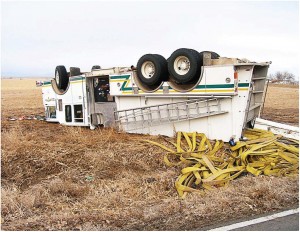 Curve-related crashes are a common cause of firefighter injuries and fatalities. Drivers must recognize the hazards of driving a vehicle through a curve, and be mindful that critical speed is reduced under wet and icy conditions. (Shutterstock photo)

Overcorrection is also a common cause of curve-related crashes. How many times have we heard of a fire apparatus crash that was caused when the driver drifted off the right side of the road, attempted to bring the vehicle back onto the road, overcorrected and then caused the vehicle to roll over?

Curve-related crashes are a common cause of firefighter injuries and fatalities. Drivers must recognize the hazards of driving a vehicle through a curve, especially during inclement weather conditions or while operating a vehicle with a high center of gravity. Drivers must be thoroughly familiar with their districts so they are able to recognize that a curve is approaching and slow down well in advance of entering it. Realizing that you are going too fast when you are midway through the curve is too late. You’re probably going to go for a terrible ride.

Daly has been a contributing author to Fire Engineering Magazine, Pennsylvania Fireman and Firerescue1.com. He has a master’s degree in safety from Johns Hopkins University. He can be contacted at
station56@aol.com.