During 1993 Mankato, Minn., experienced a flood. A big one. It was discovered during the event that that River Front Drive’s storm sewer lines, which run under the street, were compromised. Among the sites threatened by this instability was a historic railroad depot. 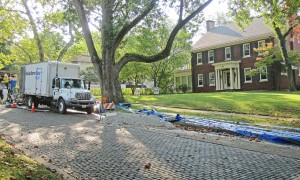 First used in the 1970s, CIPP is suitable for most municipal pipe repairs and is ideally suited to preserving or restoring historic buildings and sites like this one in Decatur, Ill. (Photo provided by Insituform)

The city turned to cure-in-place pipe technology, performed by Insituform, to preserve not only that site but the whole recently renovated riverfront development.

Relocation or demolition of a historic building is undesirable; additionally, digging or excavating are impractical and inconvenient because they halt traffic flow and impede business. As a result, municipalities sometimes turn to CIPP — a trenchless rehabilitation method used to repair existing pipelines without digging or excavation. CIPP may be used for water, sewer, gas and chemical pipelines.

With CIPP a damaged pipe is typically covered or filled by a felt pipe containing resin. The liner is then inverted using water or air pressure, before the resin is cured using hot water, UV light or steam. Closed-circuit TV is used to inspect the pipe to insure the job has been successful.

According to Lynn Osborn, Insituform application and support manager, CIPP is an ideal method for rehabilitating pipelines without disturbing historical sites.

“Many small and medium diameter lines can be repaired with little or no excavation. Although this concept of minimal disruption is important to cities and towns, no matter where the repair is taking place, it’s critical when pipelines run near historical sites.”

German Village in Columbus, Ohio, is the largest privately funded district on the National Register of Historic Places. The site experienced issues when its brick sewer line system, which was built in the 1860s, began showing signs of deterioration in 2004. 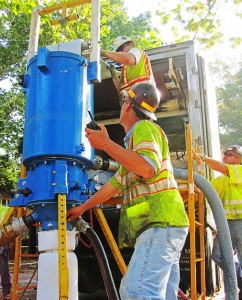 When it’s impractical or
impossible to dig, when traffic can’t be diverted or a tourist spot can’t afford to be closed to customers, municipalities are increasingly turning to CIPP. (Photo provided by Insituform)

When it became apparent that the system needed repair, the city turned to CIPP trenchless technology. This was in large part due to not only the sewers having been built in the 1860s, but the brick-paved streets having been built then as well. No one wanted to see the streets dug up, and CIPP allowed for the necessary repairs without destroying them.

The city of Columbus used the technology not only in German Village, but also in Clintonville and anywhere else that digging would disrupt traffic or trade. “ … Trenching in brick streets can be very disruptive and expensive, particularly if brick street restoration is a part of the construction project. In this case pipeline rehabilitation with CIPP can prevent damage to the brick streets and avoid the expense of brick pavement removal and replacement,” said Osborn.

While CIPP can be very effective, even preserving trees and foliage, it is not suitable in every situation. Sewer lines that slope towards rather than away from houses, in addition to crushed sewer lines, might prevent the use of CIPP. Also, Engineering Lining Services Production Manager James Mako said that CIPP use is difficult in an area full of water, or if “there is an extremely large transition … and you don’t have adequate access.” But those scenarios are rare.

One of the benefits of CIPP is the speed of the repair. Decatur, Ill., recently experienced not one, but three water main breaks. This led to road closures and the sinking and bowing of historic brick pavement on Macon Street, near bustling Millikin University.

The only solution allowed or desired was one that would not further endanger the historic streets. And with the busy traffic, the cure couldn’t stop traffic unnecessarily. With CIPP, the job took just one day.

Since it’s a relatively new technology, there have been concerns about how the resins might affect the water supply. Testing conducted by the Virginia Department of Transportation showed that some CIPP installations could potentially cause aquatic toxicity if not carefully and properly installed. Choosing a company that is experienced and conscientious will prevent potential environmental issues down the road.