Though it has been 25 years since Bristol, Conn., and surrounding communities first considered the addition of an energy-from-waste facility as part of their solid waste management program, Mayor Arthur Ward remembers how area residents opposed the idea.

“There was a lot of resistance from the public, and they were pretty vocal about petitioning against it,” he said. “They were afraid of the newness of the project, and those fears were born out of a lack of education about the process and a complacency to keep putting trash in landfills.”

However, city officials knew that more landfills were not the answer: There needed to be a more sustainable solution to solid waste management. When they learned of the high-tech combustion system spearheaded by Covanta Energy and saw that it was both an environmentally and economically advantageous option, they were quick to break ground.

“Our energy-from-waste plant does not do anything but contribute positives to the community,” Ward said. “It’s less expensive. It’s reliable. It reduces greenhouse gasses. It recovers metals that would be lost if trash was processed the old way, and it allows us to put energy back into the grid.”

With Americans generating 250 million tons of garbage each year, the search for cost-effective, reliable and sustainable ways to deal with the 134 tons of material that wind up in environmentally hazardous landfills year after year is a constant one. For some communities, the solid waste solution is an EFW facility, which allows non-recyclable waste materials to be converted into useable heat, electricity or fuel through a variety of processes, including combustion, gasification, pyrolization, anaerobic digestion and landfill gas recovery.

It’s a concept that is used widely in Europe, where land is at a premium. Covanta Energy Corporation is an internationally recognized owner and operator of large-scale energy-from-waste facilities, providing communities with an environmentally sound solution to their solid waste disposal needs.

Jill Stueck, vice president of corporate communications for Covanta, said she too, understands communities’ confusion over the process. But residents can rest assured that this is not the unmonitored incineration practices used before the Clean Air Act of 1970.

“It’s not even remotely close to it,” she said. “It is a pollution-controlled, sustainable waste management program that not only embraces the three R’s of reduce, reuse and recycle, but takes it a step further by recovering energy from waste that’s used to heat downtown areas and feed electricity back into the grid.” 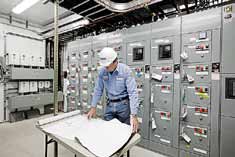 EFW facilities are typically funded through municipal bonds, with the payoff period laying between 20 and 25 years. At that point, a well-operated and maintained facility should be hitting its stride and proving to be a worthwhile asset for the community. Pictured are the computers that are monitoring the combustion chamber and emissions systems in a Covanta plant. (Photo provided)

Waste is delivered to an EFW plant and temporarily stored in a bunker, which is maintained under negative pressure and to control odor. The waste is then fed into a combustion chamber and burned at extremely high temperatures, generating heat that boils water to create steam.

“People see smoke stacks and assume there is something toxic happening at our facilities, but in reality it’s just steam,” Stueck explained.

The steam turns a turbine-driven generator to produce electricity and heat while the state-of-the-art air pollution control equipment is used to cool, collect and clean combustion gases. All of the pollution controls, emissions and operating criteria comply with rigorous state and federal standards.

Residual material is collected and filtered to find ferrous and non-ferrous metals that can be recycled before the remaining ash, or about 10 percent of the original solid waste material, is transported to the landfill. 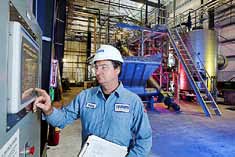 Americans generate 250 million tons of garbage each year. For some communities, the solid waste solution is an EFW facility, which allows non-recyclable waste materials to be converted into useable heat, electricity or fuel through combustion, gasification, pyrolization, anaerobic digestion, landfill gas recovery and other processes. (Photo provided)

“We pull out 400,000 tons of ferrous and over 150,000 tons of non-ferrous metals each year. To put that in perspective, it’s enough metal to build five Golden Gate Bridges or for the production of over 1 billion aluminum beverage cans,” Stueck said.

While admittedly not inexpensive to start up, officials throughout
the nation say an EFW facility’s benefits outweigh its cost. The plants are typically funded through municipal bonds with the payoff period typically 20, sometimes 25, years. At that point, a well-operated and maintained facility should be hitting its stride and proving to be an extremely worthwhile asset for the community.

Stueck says when looking at siting a new EFW facility, the profitability of the arrangement for a community often depends on the power purchase agreement negotiated with the utility for the sale of electricity the plant produces. For the most part, counties want to be in control of solid waste disposal in their communities to insulate them against radical rate changes. Given this, the preference is usually for a county to build its own facility.

“Most counties don’t want to site a landfill for waste disposal. In
fact … the preference is for an EFW facility due to its much smaller footprint and relatively minimal environmental impact,” she said. Ward noted that the city of Bristol has just signed a new 20-year contract with Covanta and has plans to continue moving its sustainable waste management program forward, embracing organic disposal systems and following new standards as technology improves and develops.

“What’s really nice is that every one of the original 14 communities that were on the initial committee to bring the plant here still support it,” he said. “The residents support it as well, which is a switch from those early days. I take a lot of pride in the facility that brings jobs, clean energy and sustainable waste management practices to the community. Perhaps one day my administration’s legacy will be trash: and that’s just fine with me.”