In the last article, I discussed how a vehicle “burns off” kinetic energy and comes to a stop. We mentioned that when the tires on a vehicle lock up, they slide across the road surface and create tremendous amounts of heat. This process causes the vehicle to lose steering control and skid in a relatively straight line until it comes to a stop or strikes another object. I’m sure many readers saw that and asked “What about ABS brakes?” 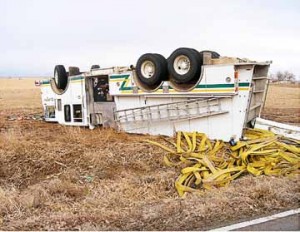 When the tires on a vehicle lock up, they slide across the road surface and create tremendous amounts of heat. If steered on a curve, a top-heavy truck like a fire engine or utility truck in this situation could also roll. (Shutterstock photo)

Years ago, vehicle designers recognized that when a vehicle enters a skid, steering control is lost. In an effort to solve the problem, antilock brake systems were born. ABS allows a vehicle to maintain steering control even when the brakes are applied forcefully. The first step in an ABS training program should be for departments to readily identify which vehicles are equipped with ABS and which are not. In the case of mixed fleets of apparatus, the type of braking system should be clearly marked in plain view of the driver, because the methods used to stop an ABS-equipped vehicle are vastly different from the methods used to stop a non-ABS vehicle.

In the days before ABS, all drivers were taught to pump the brakes during panic stops. While this idea sounds good in theory, it isn’t that easy in practice. For this reason, the job of pumping the brakes was given to a computer. In an ABS-equipped vehicle, sensors on the wheels detect when a wheel is about to lock. Once these sensors detect impending lock-up, the computer then pumps the brakes for the driver, preventing the tires from skidding. 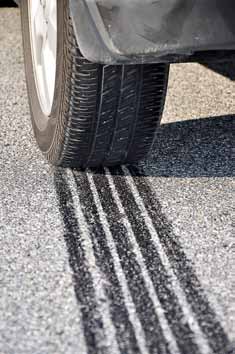 ABS brakes are newer technology that will pump a vehicle’s brakes for you. But the feel of that pumping action catches many people off guard and motivates them to take their foot off the brake pedal. Learning in a controlled environment what that feeling is like is a valuable driver training technique. (Shutterstock photo)

When ABS first gained popularity, I would often be called to investigate accidents that involved elderly drivers. These drivers had been driving for 40 or 50 years with traditional non-ABS-equipped vehicles. I would often ask these drivers what had caused the crash to occur, and I always seemed to get the same answer: “Officer, the other vehicle pulled out in front of me and I slammed on my brakes. Then the brakes stopped working.” I would ask what made this person think that their brakes stopped working. The answer was always the same. “As I put my foot down on the pedal, the brake pedal started thumping.”

In reality, the brakes were working fine. The problem was that the ABS was engaging and these drivers had never had any experience with this type of situation. Instead of leaving their foot down and steering around the hazard, they took their foot off the brake and ended up crashing into the other vehicle. For this reason, we drivers need to know what it feels like when the ABS kicks in. A recommended training practice is to take a vehicle out to an empty parking lot and speed up to about 15 to 20 mph. Slam on the brakes and leave your foot down for the entire stopping distance. As the ABS engages, you will feel the pedal start to “thump” underneath your foot.

While some may argue that this type of training causes undue wear and tear on the vehicle, I ask: Where would you like yourself or, say, an emergency vehicle driver to first encounter what it feels like for the ABS to engage? In an empty parking lot at 15 mph and under relatively controlled conditions? Or on a rain-slicked roadway at 60 mph? It’s much cheaper to send a vehicle out to have the tires and brakes checked after ABS training than to experience the ABS engaging for the first time in an emergency situation and not know what to do.

Drivers should be taught to stomp, stay and steer. This means that when faced with an emergency stopping situation, the driver should stomp down on the brake pedal; stay on the brake pedal, not pump it; and then steer around the hazard.

Bear in mind, however, that in an unstable, top-heavy fire or utility truck, sudden steering maneuvers can send the vehicle into a rollover situation. Don’t put yourself in an “out of the frying pan, into the fire” situation. Rolling the truck to avoid a squirrel is probably not a good idea. For more information on brakes and ABS brake systems, visit www.drivetosurvive.org/brakes.htm or view www.fmcsa.dot.gov/multimedia/abstruck-wmv-broadband-stre.wmv