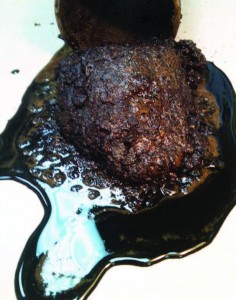 The sludge created while making beet molasses is added, along with other beet waste products, to the salt brine mixture. Since beet juice is waste stream product, it has a rotten odor. Beet molasses, on the other hand, has a smell similar to syrup. (Photo provided)

Beet juice has run its course, say some municipal users and commercial manufacturers.

The Madison and Dane County Department of Health in Madison, Wis., has begun to scrutinize the winter road product, questioning its safety for the ecosystem. Specifically, sugar beet juice, which is used in salt brine during the winter months, is accused of causing runoff that ends up in the lakes and streams.

Since beet juice is organic, it requires oxygen to break down the carbon. It’s biodegradable, but if it’s consuming too much oxygen in the water as it deteriorates, the DOH believes it could cause a condition known as hypoxia, which lessens the amount of oxygen the fish and other members of the nautical ecosystem receive.

According to beet-usage supporters Christine Walsh, streets superintendent for the city of Beloit, and Denver Preston, general sales manager of winter products at KTech Specialty of Ashley, Ind., however, the problem is really not much of a problem at all for two reasons. Using less of it completely resolves the runoff issue for one thing, Walsh said.

“When we’re spraying rock salt, it’s maybe seven gallons over one mile, just enough to get it wet.” Walsh added the street department of Madison doesn’t use very much salt brine along to roads to keep the runoff to a minimum. She prefers to use 80 percent salt, 10 percent organic beet juice and 10 percent calcium chloride. However, streets workers, who mix the blends for roads, in Beloit generally use 15 percent beet juice in their concoctions, adjusting the percentages when the weather changes.

The city of Beloit has been using beet juice for nearly 10 years and has the system down to a science. For street superintendents who don’t yet use beet juice, though, Preston recommends not starting now. He believes that beet juice will be old news within the next two years because of other issues.

Preston explained that the concept of beets for deicing is not an environmental concern because all organics, including grass clippings and leaves, use carbon. For his company, the issue with sugar beet juice is that it’s inconsistent and very messy.

“It’s waste stream product,” he said. “Waste stream products are just that. They’re nothing but waste from the process of making molasses and table sugar. As they’re processing the beet, they’re removing all the waste, all the components that they don’t want such as beet pulp, sand, dirt.”

Pulp, dirt, sand and sludge end up in the products that beet juice users buy. Agencies that don’t have filters on their inlet lines have found whole beets at the bottom of their tanks. Eventually, the dirt, pulp, sludge and whole beets can end up in the deicing trucks and plug the sprayers. 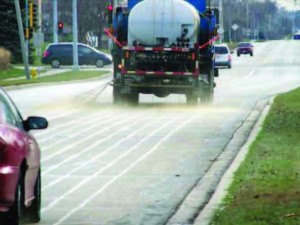 Deicing trucks have been known to clog up with whole beets or be slowed
down by beet sludge. Drivers may not know that it’s happened until after the run is over and ice on the roads doesn’t melt. The process of cleaning beets out of a truck is time consuming for street departments. (Photo provided)

To combat this issue, buyers can dilute the beet juice mixture with water so that there is less of the beet waste; however, water freezes.

Both Walsh and Preston have figured out a way around the freezing
problem by using chlorides to dilute the product. K-Tech has also switched to selling primarily a beet molasses product instead of sugar beet juice.

Unlike beet juice, which has very little sugar and an inconsistent amount of it, beet molasses’s sugar level must be consistent because it’s also sold to bake cookies and desserts.

The carbohydrates in the beets are what mixes with chlorides on the roadways, so buying a product in which the sugar content varies can become a costly business risk.

“Beet juice deicers were the forerunners. I give credit to the pioneers,” Preston said. “I have an old cell phone that all I could do is call people on it, but I have a cell phone now that can do everything. The beet juice was the first of its kind but now there are better products on the market.”