Bayfield, Wis., may be tiny, but the lakeside community of 500 leads the nation in terms of eco-friendly practices and citywide sustainability efforts.

“We have worked really hard to be as green as possible,” said Mayor Larry McDonald. “We believe that we have a responsibility to lead by example.” 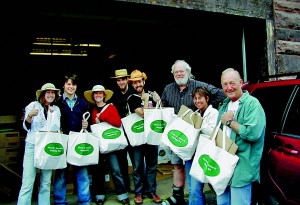 Groups of volunteers — this one including Bayfield, Wis., Mayor Larry J. MacDonald, third from the right — distribute Clean It/Green It bags every year to residents.

The genesis of Bayfield’s ecomovement stemmed from the community’s concern for the economic and environmental health of its No. 1 tourist attraction, Lake Superior. Though it normally has a small population, the city swells into the thousands during the summer season. As a result, the city and its people saw a need to look at things a little differently in order to make the area as green as possible.

Billie Hoopman, Bayfield city clerk, said the city’s sustainability efforts took off in 2004 and show no signs of slowing down any time soon.

“We have 41 travel green businesses and use retention ponds to control water runoff. We employ recycling efforts and we are always looking to get everyone involved,” she said. “As a matter of fact, many of our initiatives have been citizen driven.”

The Wisconsin Department of Tourism initiated Travel Green Wisconsin in 2006 to promote environmentally-friendly business practices. The program is the first state sponsored sustainable travel green certification program in the nation. 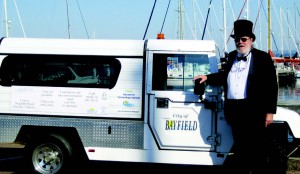 Bayfield, Wis., Mayor Larry J. MacDonald and the city’s new electric vehicle, which is used by the public works department.

McDonald says implementing green practices has proven to be economically beneficial to the city and its residents alike. Bayfield recently purchased an electric car for its public works department that costs $.87 daily to operate, as opposed to the $22 in gas used daily by the vehicle it replaced. In addition, the city has received a number of grants that are being used to subsidize larger projects like a $9 million wastewater treatment plant, and distributed among households and businesses to encourage them to adopt new habits as well. Sometimes the money is earmarked for a specific effort, such as water conservation, while at other times the residents can choose how it will be used.

“Clean It/Green It has been one of our most successful programs,” McDonald said. “It started out with a door-to-door campaign in which we handed out reusable shopping bags with CFL bulbs and instructions for making your own green cleaning supplies. It’s usually hard to tell how well a program works, but you know we must be doing something right when you go to the local grocery store and there’s no vinegar to be found.”

Bayfield has been recognized for its efforts, leading McDonald to accept frequent speaking engagements across the country and in Sweden about the programs and processes they have put into place. Those efforts earn rave reviews from other communities, who marvel at the success their eco-municipality has enjoyed. 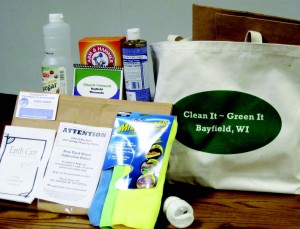 A Clean It/Green It bag from Bayfield, Wis., and its contents. (Photos provided)

“There are a variety of reasons why we believe it works, but when you have residents who care, businesses that want to make a difference and government officials who are plugged into the concept, it really is a win-win situation for everyone,” Hoopman said. “As we continue to learn about new things, we will try to keep our efforts moving forward.”