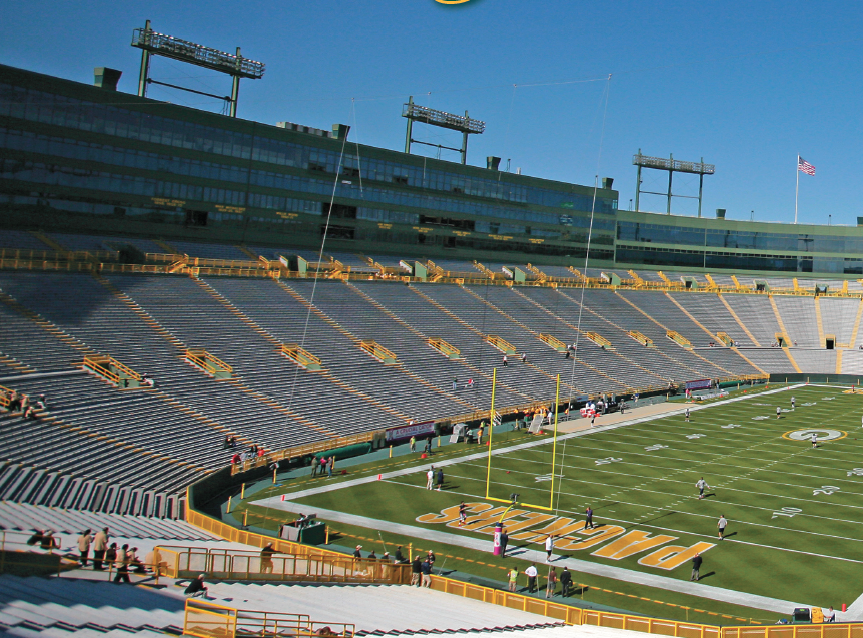 Lawns in northern cities have to do more in a shorter growing season. That’s an unacceptable restriction for a lawn that roots for the Green Bay Packers.

Lambeau Field celebrates its 55th year of Packers football in 2012. The team is owned by the city of Green Bay, population 102,726, and the Green Bay/Brown County Professional Football Stadium District.

The 73,000-seat field has gone through many changes in the past half-century. Improvements have included the installation of heating coils under the field, additional seating and scoreboards, an atrium and grass-growing lights that sustain the storied, natural turf.

Dutch firm S.G.L. designed Lambeau’s grass-growing lights, called Stadium Grow Lighting. The artificial lighting system is made up of a complicated grid of retractable arms that hold hundreds of light bulbs. The Packers were the first North American team to experiment with these lights.

“We got to use it and try it out before making a final decision,” said Allen Johnson, fields manager for the team. “We started out with three MU360 units and moved them every other day.”

The lights were first put out on one-half to one-third of the field in October of 2010 on an experimental basis. They worked out really well, and in 2011 the team bought nine units that are out from the beginning of October to the first week in December.

“It takes about three full-time assistants to bring the lights out and then remove them from the field. Also when we mow or fertilize we move the lights from one half of the field to the other,” Johnson said. On a game day, the lights are completely removed. They fold in, accordion-like, and are moved quickly and easily.

“The grass is great looking, it’s thicker and healthier, mature, and fuller,” he stated, describing some of the benefits incurred with the lighting system. “We try to get the grass as healthy as we can before the start of the season. The lights and heat from the coils underneath the field are a good combination and complement each other. By the start of December we have a pretty full canopy.”

The benefits the lights have on the field outweigh a few minor issues the grounds crew experiences. Johnson noted that when the air temperature is below freezing, the lights can’t be used. Water, or rather spraying water, is another issue.

“Water on the bulbs can make them pop,” stated Johnson. “But regular straight-down rain usually isn’t a problem.” They have to be careful with the field irrigation system, where the water can randomly squirt and hit the bulbs. In essence, the grounds crew had to learn “how to work around the lights and with them.”

The Packers are in the process of adding around 6,000-7,500 seats and two new scoreboards to the field. Some sunlight will be lost in the new construction area, so the lights will be used even more. Use of the lights might begin a little earlier, probably from September. Completion for the project is targeted for 2013.

The lights are monitored daily when they are on the field. Data is collected on the lights in numerous ways, including a sensor on the top of the roof and a probe down on the field that measures air and soil temperatures.

“In the past, people used to ask me why you can’t grow grass easily, especially with the heating coils underneath the field,” said Johnson. “It’s just not the heat coils. You need air plus soil plus light for grass to grow. If you don’t have these, grass will not photosynthesize properly as it should. It will just be in a survival mechanism.”

“Grass is trying to survive. It seeks sunlight,” he continued. The combination of a heat system and sufficient light, or a supplemental light source, works. The grounds crew, the players and Packers’ management are all very satisfied with how the lights perform.

After the success with grow lighting achieved by the Green Bay Packers, other sports teams including the Houston Astros, the New York Red Bulls and the Seattle Mariners also installed the system.

WORKING WITH THE LIGHTS — The grounds crew moves the lights into position on the field. The photo illustrates the retractable arms and mounted lights. FIELD OF LIGHTS — Lights spanning half of Lambeau Field, home of the Green Bay Packers football team, from the end zone to the 50-yard line. NIGHT LIGHTS — The artificial lighting system is used all day and night from early October to December. (Photos courtesy Green Bay Packers)