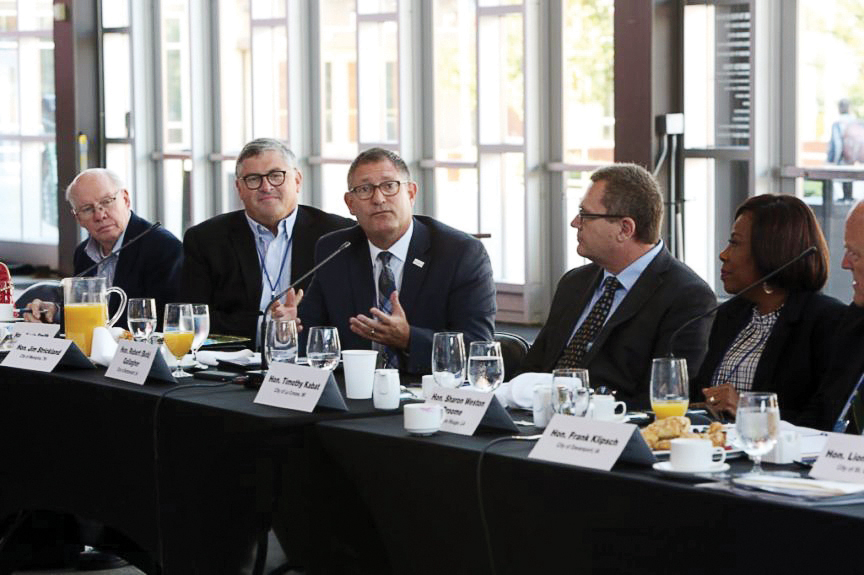 The Municipal spoke to mayors in Baton Rouge, La.; Bettendorf, Iowa; and Helena-West Helena, Ark., about how the association has benefited their respective cities.

Mayor-President Sharon Weston Broome of Baton Rouge and Mayor Robert Gallagher of Bettendorf are also co-chairs of the executive committee. They were named co-chairs in September, and it’s a two-year term.

Broome, who is in the third year of her term, said when she became mayor-president, she had a lot of organizations she could have joined, but “I was extremely interested in the MRCTI for a variety of reasons — one being the focus on the Mississippi River.”

Broome said in Baton Rouge the Mississippi River is one of the most dominant parts of the city and state.

“We’ve had our share of disasters in the last decade with $200 billion in losses — $100 billion in the state of Louisiana with the longest period of flooding 275 days — that broke all previous records,” she said.

“MRCTI allowed me an opportunity with a coalition of mayors to look at innovative ways to address issues,” Broome said, adding backwater issues and issues of resiliency are a common thread.

Broome was a victim of the flooding as well. During the year she was campaigning, she said, “My home was flooded and it was a year and a half before it was fully restored. So that’s personal for me and our community. Others dealing with the flood are still in recovery.”

The mayor said she was excited about two recent events: a speaker at the last conference who spoke about innovative financing options and the partnership with Rotary International. “Rotary is a huge network of over 1 million members. Their overall mission is to grow local economies and the development of critical water infrastructure. Their mission seems to align with ours,” she said.

Both she and Mayor Gallagher were excited about the environmental economic impact bonds.

Mayor Gallagher agreed, “It would be great to have a city deploy so they could use it as a pilot.”

MRCTI would look at the program applications and choose two so they could begin construction in the spring, according to Gallagher.

“The project need not be specific in the river,” he noted. “It could be border cities with tributaries, rainwater, creeks or streams.”

Many of the river’s issues relates to backwaters and wetlands lost. Gallagher said, “If we could reclaim the places where the water used to go it would help eliminate the same problems.”

He added, “The Corps of Army Engineers has over $12 billion in projects they’d like to complete, but they’re not appropriated. They’ve not done any restoration because the funds are not appropriated. That’s where an association like ours can help. We have 10 states, 31 congressional districts and 95 mayors working on a nonpartisan basis to solve problems.”

For as young as an organization that MRCTI is, the amount of momentum it has been able to pick up “is fantastic—not just in DC but also financially,” according to Gallagher.

MRCTI is working to reduce plastic waste in the river with local companies and is also working to control nutrient load.

“We’re working with all kinds of folks to secure actions in each of the 10 states on the river. We’re building partnerships on the state, federal and local level and with farmers for more sustained farming practices like crop rotations and buffer zones,” Gallagher said.

Gallagher said they’re also working on the “end game so companies like General Mills and Walmart will say to their suppliers it’s important for them to know all the ingredients are sustainably produced.”

Asked whether the mayors changed any of their operations since the association, Gallagher said in his city there’s been no specific policy changes, but because of the association with other mayors he’s learned a lot about best practices — specifically with public works — and he’s opened his mind to how he can help his neighbors.

“I think a little differently,” he said.

Broome said her conversations with other mayors on the front end of the Mississippi show they’re concerned about what takes place on their end and that what happens on the south end of the river also matters to them. Members are working to change certain cultures and habits, especially with plastics, starting with city staff.

Mayor Kevin Smith of Helena-West Helena was elected mayor in January 2019, but his predecessor had joined MRCTI in 2015 and had also recommended him for the executive committee, which is made up of about 12 members.

Smith said, “The Mississippi River is a pretty big thing to have facing your town. It’s an extremely important resource but also challenging with the threat of flooding.

“It’s a pretty amazing thing to have and the reason we’re here in the first place. The association gives us a chance to work together on common issues — and there are a lot of common issues — economic development, stormwater and water and sewer.”

There are also common environmental issues, with Smith stating, “Everything ends up downriver so it’s important to be friends with the people upriver.” He added, “The biggest thing is nitrogen runoff from farms. We’re a highly agricultural community — the bread box of the area — down here cotton and rice are big crops and very intense nitrogen crops.”

Smith noted, “Education is important. One thing this organization does very well is coming up with win-win solutions between cities and businesses. I’m very impressed with how they do that. They’re very progressive on environmental issues and are unafraid to say so while taking industry and agriculture along for the ride, realizing that we all need to work together because this affects their business, too.”

He added, “When I see what Colin (Wellenkamp) and the association is doing on environmental and economic issues, I’m real encouraged.”

In the Delta region, Smith’s city and those nearby are amongst the poorest in the country, and he said at times they feel they’re the embarrassment of the state.

As far as changing operations, Smith is looking at the environmental economic impact bond because of the group. He said, “We had a presentation on it, and I wasn’t familiar with it at all. We might or might not make this round, but we are looking at it more proactively.”

Smith also wants his city to participate in the plastic reduction initiatives that MRCTI is promoting. As the others have stated, Smith said the collaboration with other mayors has been a bonding and learning experience.

“We’re all divided by artificial political and geographical boundaries. I have more in common with mayors across the river because of the river than in other parts of my state.”

He shared that his city supplies emergency services across the river in the state of Mississippi where a casino and hotel are located.