All those cigarette butts were the primary reason the village of Elk Rapids, Mich. — 15 miles north of Traverse City — recently enacted a tobacco-free ordinance.

Village Manager William “Bill” Cooper explained the village’s tobacco-free ordinance came about at the request of volunteers who were tired of picking up cigarette butts. Cooper said the park and recreation commission has people going out to pick up trash.

“One of the biggest complaints was cigarette butts all over the place and they got tired of picking them up,” Cooper said. 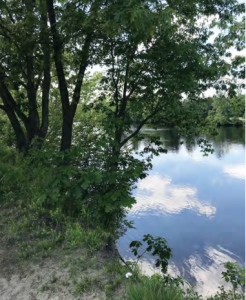 The Merrimac River runs alongside Memorial Field in Pembroke, N.H., and is home to a large regatta every fall. Due to the tobacco-free policy, the river is not littered with cigarette butts. (Photo provided)

The volunteers finally approached the council about no smoking in the parks. “It didn’t take long for the council to think it was a good idea,” he said.

The ordinance was adopted in May of this year and includes beaches, parks, trails, public buildings and even two blocks downtown. Cooper said customers and workers downtown can smoke in back of the buildings but not out front.

Reportedly the village clerk investigated other community’s tobacco-free ordinances and came up with a boilerplate that defined smoking as well as stating where the activity is prohibited. Elk Rapid’s ordinance defines smoking of any tobacco products or other plants such as marijuana, shisha and hookah whether as cigarettes, cigars, pipes, bongs, vaporizers or electronic cigarettes.

Cooper said they posted a sign at the entrance coming into the park and stenciled on sidewalks. The village hasn’t heard any complaints, and while it’s a new ordinance, so far it has had only one incident where someone had to be asked not to smoke.

They plan on giving verbal reminders and warnings but Cooper said, “If the police are ever forced to write a ticket, there’s a potential fine of $25.”

Memorial Park is along the Merrimac River and has several baseball fields, playground, trails, soccer fields, places for barbecues and is host to a Fall Regatta rowing meet that draws 15,000-20,000 people to this town with a population of 7,000. He said the Scout had done other projects at the park in the past.

As part of the project, the Scout paid for the signs and installed them himself with the blessing of town administration about a year ago. Jodoin said the town doesn’t have “a true ordinance—there’s nothing on the books.”

Instead, the select board decided to allow the signs and have it be more on a “goodwill basis.”

“We didn’t want to tie up cops on cigarette patrol—if they get involved, it’ll be more of an interaction reminding people it’s a no smoking area,” Jodoin said.

Jodoin spoke to Galligan about whether the policy has made a difference over the past year. “She told me she couldn’t believe how much cleaner the park is. She picked up four cigarette butts opposed to taking four hours to pick them up. It is always been something Rose wanted to do, but the selectman hesitated because of enforcement—but so far just with signs and word of mouth, it’s working.”