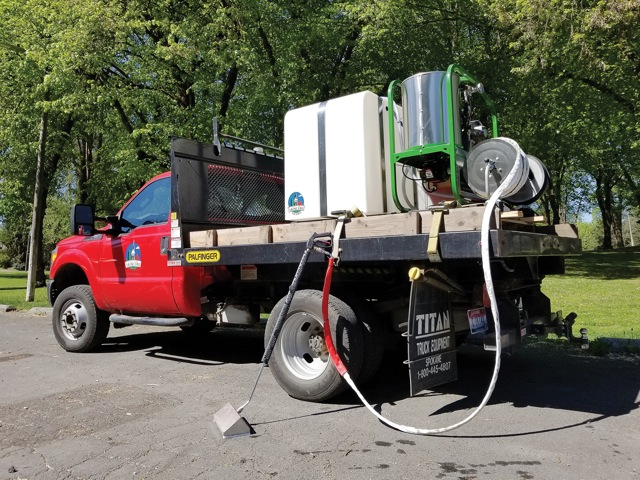 After checking how effective the hot water weed control unit would be, its operations and comparing it to the current weed program, the benefits of the new program using it won the approval of the town council. (Photo provided)

In becoming environmentally aware, cities are taking steps in every department to minimize the negative impact they can make on the planet. Moscow, Idaho, in particular, has uniquely supportive government when it comes to taking risks with new things that could benefit not just the city, but the world.

Taking a risk to make a change

“We have a community of about 25,000 residents and we’re a university town, but we’re focused on operating sustainably and responsibly,” said Tyler Palmer, deputy director of operations of Moscow Public Works. “That’s something that’s always a community interest, so it’s relatively rare for a city of our size to have a dedicated environmental services group. It’s an indication of our priority of sustainability.”

In attending the American Public Works Association Conference in 2018, Palmer observed a presentation about winter maintenance on bike lanes. When the presenter briefly mentioned using a hot water weed control unit during the summer, Palmer’s interest was piqued.

After doing research, he discovered that sort of weed control was broadly used throughout British Columbia, only a few hours north from Moscow. Soon the lead was handed off to Ty Thompson in the environmental services group.

“We don’t have a lot of resources as a city. It’s hard for us to find municipal operations, but unlike a lot of other cities, we get some leeway to take some chances,” Palmer commented. “One of the hard things about working in the municipal government (is) cities are very limited with the way it’s structured and funded. It’s not an environment that encourages people to take chances because there’s no reward.

“It’s easy to fall into the status quo, take an apathetic approach, so it’s good to work for a municipality where we’re encouraged to take chances and try new things. There is a fraternity between local governments, so a lot of times it takes that first one to take the plunge and helps others move along with it. I’m happy that Moscow can serve that purpose.”

While the weed killer program was widespread in other countries, the only reference the environmental services group could find in the U.S. was at the University of Colorado, where the program had been used for the past two years in a similar fashion the city planned to use.

Hot steam shooting out of the wand explodes the cell walls of the plant, which kills it. The steam isn’t induced with harmful chemicals, something that’s becoming a bigger concern as the years go by, and is time efficient

“We have a lot of people who are very interested in eliminating the use of chemicals in our rights of way,” said Palmer. “There’s continuing research about the chemicals that have been broadly used for a long time that makes one pause.

“The surest way to avoid having long-term or unanticipated issues is to use hydrogen monoxide — water — which isn’t going to hurt anybody. It’s a win-win. There doesn’t seem to be a loss.”

The city was able to purchase the weed killer unit for the same amount it’d typically pay for an annual contract. With it being operated by internal staff, the public works department will be seeing the savings of the program in a few short years.

To keep the community up to date about its decisions, the department made a Facebook post to introduce its plan, which was met with nothing but enthusiastic responses and questions about expanding the program or how extensively it can be used.