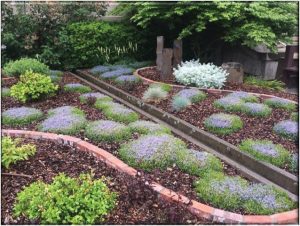 Another active program in Moscow is the water conservation program. Along with providing a “wisescape” guidebook that takes people step-by-step in how to plant, the city holds demonstration gardens for the public to engage with. Wisescape also lowers greenhouse gas emissions compared to grass, which requires water and lawn maintenance. (Photo provided) 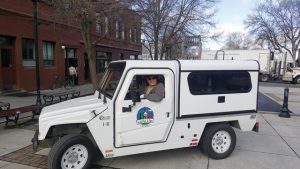 The Eco Driver Program includes an alternate fuel transition plan that will replace traditional fuel-operated vehicles with electric vehicles where there’s an opportunity. Currently, Moscow has one full EV in the water department while a number of other vehicles have been identified for transition in the upcoming years. Pictured is Moscow Mayor Bill Lambert. (Photo provided)

One program at a time

With most pumps either being 100% on or off, a large amount of electricity is used to ramp it up every time it switches on — which is hard on the pump itself. A variable frequency drive was implemented to create a dimmer switch effect, allowing the pump to run more efficiently.

Additionally, Moscow has vehemently tackled fuel consumption with the Eco Driver Program. Before 2012, when the program was implemented, there was an average of a 4% increase in fuel consumption, which only grew with the city. 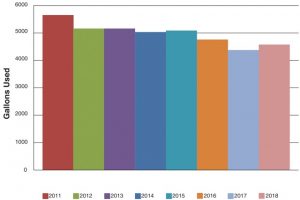 While Moscow is specifically focusing on hybrid police vehicles, which are projected to save 10,000 gallons, it’s also looking into opportunities to transition to electric vehicles. (Photo provided)

Palmer elaborated, “Our goal was to frame the employees on how to responsibly use the fleet — combining trips, planning trips, how they drive — all things that seem like a minor difference as an individual but a big difference for a fleet of a few hundred.

“I think it was Ban Ki-moon (the eighth secretary-general of the United Nations) who said real sustainability is leaving the planet for others to enjoy the way we have. That’s our goal as a city.

“Don’t be overwhelmed by the scope and scale,” advised Palmer. “As cities, we’re never going to have the resources to do everything at once. Incrementalism is important. Another thing I found helpful was considering the fiscal argument. There’s almost always a compelling fiscal argument with conservation and sustainability. Our measurements haven’t cost money overall, but saved it.”

After implementing the program, the 4% increase was halted and instead a significant decrease in fuel usage began. A low use review is performed every year where vehicles’ thresholds are reviewed. Vehicles falling below the threshold are checked to see how necessary they are for the department, and if necessary, other avenues are explored to potentially combine with another vehicle.

“We’re at the special corner of Idaho and of the world,” added Ty Thompson, Moscow environmental services compliance coordinator. “People here really care about these issues. That’s reflected in the leadership and the city, which trickles all the way down to our operations staff. We’re pretty lucky to be here.”