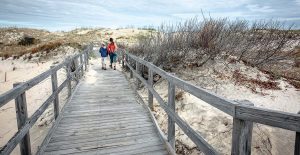 Residents can suggest allotting more funds toward “Be a Competitive First Class Resort for Residents, Businesses, and Tourists” through Virginia Beach’s Balancing Act to promote the city’s attractions. (Photo provided by Virginia Beach) 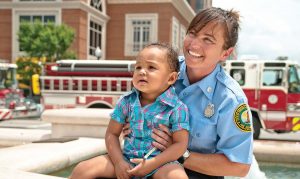 Balancing Act educates residents on where funds go and where they come from. It also enables them to provide feedback on where tax money should go, from the city’s fi re and police departments to public works and capital projects. (Photo provided by Virginia Beach) 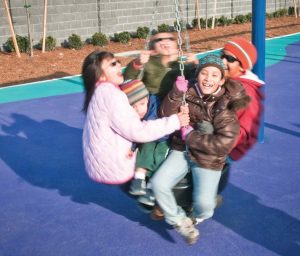 Education is another area where residents can suggest allotting more funds. (Photo provided by Virginia Beach) 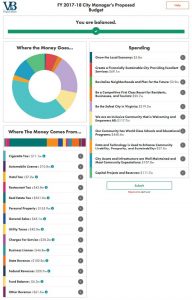 What if citizens had complete control over their city budget? No holds barred, no dreams too big or small. In this world, citizens get to shift money around, fund their most burning desires and lay off the items they feel get too much attention.

While this scenario sounds like a complete fantasy, one Virginia city is shifting this dream one step closer to reality. Sort of. Government officials in Virginia Beach, Va., started searching as long as a decade ago for a tool or program that allowed residents to engage with the city’s budget. About two years ago, they stumbled across Balancing Act.

Balancing Act is an interactive website that allows users to try their hand at allocating funds while requiring them to balance spending and revenue. This is all done online through a website created specifically to meet the city’s needs.

“We’re constantly trying to improve our citizen outreach, particularly with the budget process,” Virginia Beach Budget and Management Services Administrator Jonathan Hobbs said. “We host plenty of town halls on the topic, but you only reach a certain segment of the population through meetings in a physical location. We wanted to give people another vehicle to engage, and that’s what Balancing Act does.”

Designed to open citizen’s eyes to the challenges faced when creating a budget, the tool sparks a conversation between residents and local officials about how money should be divvied up amongst the needs of the city.

“Sometimes when you say $1 billion, it seems like a large number,” Hobbs said. “But when you break it down and see what it takes to run a municipality of this size, it puts that number into perspective. People have learned a lot about the budget process through this; it’s sparked conversation.”

The website features a big circle chart with bold colors outlining each of the city’s needs, including local economic growth, capital projects, a rainy day fund and taxes on local amenities such as hotels, restaurants and real estate. Users may click on any item in the budget and decide to raise or lower the allocation to meet their desires. When they’re done, so long as the budget is balanced, they have the option to submit their suggestions to the city for consideration.

Virginia Beach has used Balancing Act for two fiscal cycles. The website is rolled out when the city budget is presented to council members in March, and citizens have almost two months to play with the numbers and submit feedback to officials.

“One of the best things about Balancing Act is it doesn’t allow you to submit an unbalanced budget,” Hobbs said. “Balancing Act is a teaching tool that allows people to get involved and learn more about the budget, but it also allows them to engage and give that feedback to the city council.”

Over the last two budget cycles, the site has been viewed nearly 5,000 times and 128 budgets have been submitted. Hobbs said submitted budgets are taken seriously and citizen feedback is important.

“A week or two prior to the budget vote, we compile the information from the website and the city council has an opportunity to review it,” Hobbs said. “This site is one of a multitude of ways citizens have to interact with city council, but (it) hits a group of people who might not ever engage in a public setting.”

Feedback from the website combined with citizen comments at town halls and other venues contribute to the council’s ultimate decision regarding the budget. Most recently, Hobbs said, an outcry heard across all mediums prompted council members to decide to allocate more funding toward the improvement and reconstruction of stormwater projects across the city.

Another selling point of Balancing Act, Hobbs said, is the ability for local governments to remain completely transparent with their citizens and for citizens to understand the complexities of budgeting in a simple way.

“Being transparent is important to our council, and this lets us do that in an easy way,” Hobbs said. “The website is very intuitive. That’s what we liked about it. It’s a powerful tool, but it’s not overly complicated and people can figure it out easily.”

Cities looking to add a layer of transparency and citizen engagement they’ve been lacking might look into Balancing Act, Hobbs said.

“Based on our experience, this tool has been nothing but positive,” he said. “The cost in relative terms is minimal for the tool that you’re getting. Some people like to engage in face-to-face conversations and others prefer to play junior budget analyst online, and that’s OK. Either way, we want to hear your input.”